South Korean exports grew at their fastest pace in three months in November thanks to post-pandemic recoveries in big trading partners that pushed up demand for chips and petrochemicals, but the Omicron variant may pose risk to the export-reliant economy.

Exports in November soared 32.1 percent from a year earlier, the sharpest since August and largely beating the 27.7 percent growth seen in a Reuters poll. That also marked a ninth-straight month of double-digit expansion.

The result bodes well for a Korean economy that has relied on exports to underpin growth amid on-again, off-again COVID-19 restrictions that hampered recovery in household spending. The approaching holiday season likely provided a fillip to overseas demand, while stabilisation in China’s manufacturing sector offered additional support.

“The development of the Omicron variant and supply chain issues are the most important variables to exports, but for now, it looks like the recovery momentum will continue in December and throughout 2022.” 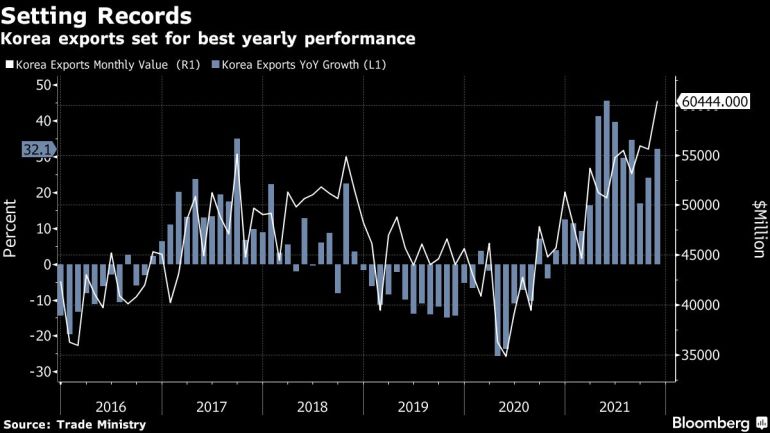 Meanwhile, exports to all nine chief trading partners grew, with those to China, the United States and the European Union rising 27.1 percent, 22 percent and 18.9 percent respectively.

South Korea reported a record 5,123 coronavirus cases for Tuesday but no Omicron case has been reported so far.