Saudi Arabia’s economy grew at its fastest pace in nearly a decade in the third quarter, boosted by higher oil prices, according to preliminary estimates from the government.

Gross domestic product in the kingdom expanded by 6.8% compared to the same quarter of 2020, the General Authority for Statistics said Tuesday, its fastest pace since 2012, when oil prices averaged $122 a barrel. It grew 5.8% compared to the previous three months.

The oil sector grew 9% year-on-year, while the non-oil economy — the engine of job creation — expanded by 6.2%. It grew 1.6% from the previous quarter, when non-oil activity performed worse than expected. 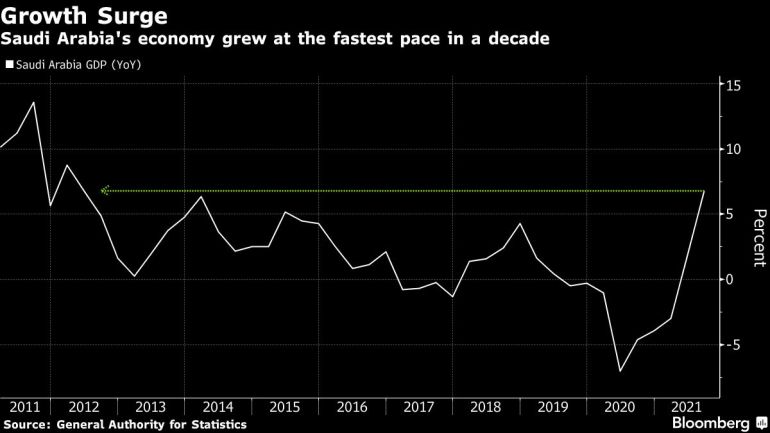 “Higher oil output as OPEC+ tapered its production cuts was the main reason behind Saudi Arabia’s strong growth numbers. Non-oil activity already surpassed its pre-pandemic peak and is likely to end the year on a firm footing.”

Saudi Arabia, the largest Arab economy, saw a sharp contraction in 2020 due to the double shock of lower crude prices and the coronavirus pandemic. This led the government to take measures to cushion the fiscal impact, including tripling the value-added tax, cutting expenditure plans and raising import duties.

Officials expect the 2022 budget deficit to shrink to around 1.6% of economic output on the back of higher expected revenues as oil prices recover.

The International Monetary Fund is expecting Saudi economic growth to average about 2.8% this year, following a 4.1% contraction in 2020 as the pandemic took its toll. It sees growth recovering to nearly 5% in 2022.