Oil prices crashed more than 10% as a new coronavirus strain sparked fears that renewed lockdowns will threaten a global recovery in demand.

West Texas Intermediate crude tumbled below the $70-a-barrel level on Friday for the first time since late September, while the global benchmark price, Brent, slumped to less than $75.

The downward spiral in prices comes three days after a U.S.-led effort by top consuming nations to release stockpiled crude in an attempt to tame surging energy inflation. Next week’s OPEC+ meeting will now take on an even greater significance, as the producer group led by Saudi Arabia and Russia must decide whether to continue ratcheting up supply or pause the increases in response to the latest market volatility. OPEC+ is leaning toward abandoning a plan for a modest production hike scheduled for January when it meets on Dec. 1 to 2, according to delegates.

The identification of the new Covid variant has already prompted the U.S., the European Union and the U.K. to restrict air travel and triggered a selloff across financial markets, even as researchers have yet to determine whether it’s more transmissible or lethal than previous strains.

The development apparently wrong-footed many in the oil market who had been comforted by low inventory levels and demand that had rebounded to 2019 levels, said Rebecca Babin, senior energy trader at CIBC Private Wealth Management.

“It was a lack of downside that had us continuing to think nothing bad could happen,” she said. “No one was thinking we could get a variant that we’re not familiar with and it could have meaningful impact.” 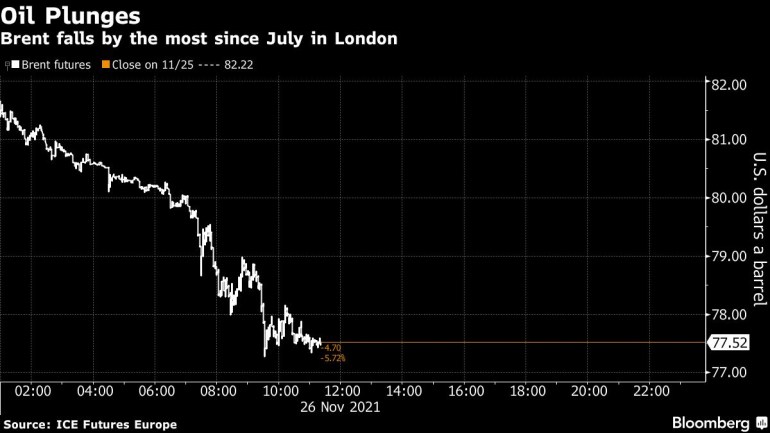 The price plunge marks a dramatic change in market sentiment. Crude hit multiyear highs in recent months amid an energy crisis in Europe and China that had also sparked rallies in prices for coal and natural gas. Some traders and analysts predicted oil could reach $100 a barrel or more.

High gasoline retail prices prompted U.S. President Joe Biden to seek ways to ease the pressure on consumers, leading to Tuesday’s announcement that the U.S. will release 50 million barrels of crude from the Strategic Petroleum Reserve, with China, Japan, India, South Korea and the U.K. also set to tap inventories. Still, oil rose on the day that the move was confirmed, suggesting traders had already priced in the new supply, or that they were underwhelmed by the supply response.

OPEC+ had warned previously it would reconsider a potential output increase if other nations went ahead with a reserve release. UBS Group AG said Friday that OPEC+ could choose to pause its current planned output hike of 400,000 barrels a day, or even cut production.

Friday’s oil selloff was likely exacerbated by a lack of trading activity during the U.S. holiday period, coming a day after Thanksgiving, and as the New York market closed early.

“It’s a sign the market got carried away from itself and that we still remain very vulnerable to Covid-19,” said John Kilduff, founding partner at Again Capital LLC.

Aside from the headline prices, crude traders also watched several other notable shifts in the market. WTI crude futures closed below its 200-day and 100-day moving averages, signs of technical weakness. The extreme pressure on the U.S. benchmark meant its discount to Brent expanded, reaching the widest since May 2020.

The picture wasn’t much brighter in oil-product markets, the part of the oil complex most directly affected by end-user demand. Diesel plunged, particularly in Asia, as the market began to price in a potential renewed hit to economic growth.

“This is a huge overreaction in terms of the market,” Amrita Sen, chief oil analyst at consultant Energy Aspects Ltd. said in a Bloomberg Television interview. “This is the market pricing in the worst possible scenarios.”

China’s ambiguity on whether it will join the U.S.-led coordinated release of oil reserves is aimed at a domestic audience to show Beijing isn’t following Washington, according to government officials involved in the discussions.