The Turkish lira fell to a record low after the central bank cut borrowing costs for a third straight month, a move that risks further undermining price and currency stability.

The lira fell as much as 4.1% to 11.0877 against the dollar, extending the biggest depreciation in emerging markets this year. Policy makers cut the one-week repo rate by 100 basis points to 15%, in line with the median estimate in a Bloomberg survey, and said they would consider ending the easing cycle next month.

It comes as consumer inflation accelerated to almost 20% in October, a level last seen in the wake of a currency crisis three years ago. Yet under pressure from President Recep Tayyip Erdogan, the central bank has lowered interest rates by 400 basis points since September, driving the currency’s real yield well below zero.

The central bank has “narrowly avoided fueling a full blown currency crisis today by including a reference to potentially halting the cutting cycle in December,” said Simon Harvey, senior FX market analyst at Monex Europe. “However, terminology around such a decision remains loose. Therefore, pressure on the lira remains.”

Easier policy in Turkey also leaves the lira vulnerable to further gains in the U.S. dollar and higher Treasury yields as speculation grows the Federal Reserve may tighten policy sooner than anticipated. The greenback rose to the strongest level in more than a year against a basket of peers this week, piling pressure on riskier emerging-market currencies that have benefited from exceptionally loose policy in the developed world.

The lira has lost around a third of its value against the dollar since December and is poised for a ninth straight yearly loss. It has weakened more than 20% since the central bank started cutting rates in September.

Before the decision, the chairman of Turkey’s biggest business group Tusiad said the central bank shouldn’t forget its main target of controlling inflation. It reflects mounting concerns that extended currency weakness risk destabilizing the economy which sits on $446 billion of gross external debt, according to central bank data.

Turkish companies and the government have to repay $13 billion in foreign-currency debt in the final two months of the year. More than half – $8 billion – is set to mature in November, the biggest amount due over the next 10 months, according to the latest available data.

Turkey’s benchmark BIST 100 Index erased earlier gains to trade 2.4% higher after the decision. The yield on 10-year government bonds jumped as much as 57 basis points, the biggest increase since September. 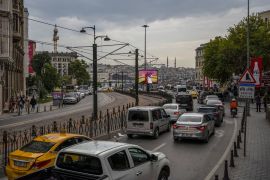 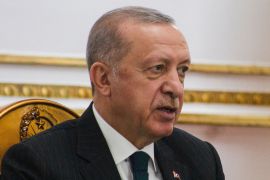 Erdogan said on Saturday he had told his foreign ministry to expel the envoys of 10 Western countries, including US. 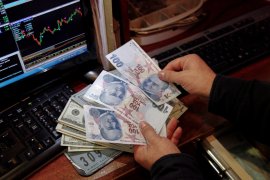 Turkish lira slides to new low against the US dollar

A surge in US inflation exacerbated worries for the lira, a currency already hobbled by Turkey’s unorthodox rate cuts. 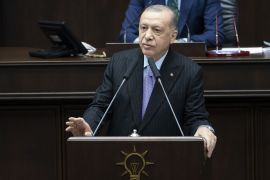