The world’s richest person so far has disposed of more than 4.5 million shares this week, according to regulatory filings. Those were his first sales in more than five years.

Musk, who frequently stokes controversy on Twitter, created a firestorm over the weekend with a survey asking whether he should sell part of his Tesla stake. While he portrayed his proposal as having to do with debate over billionaires avoiding taxes, the filings released Wednesday show some of the transactions were pre-arranged in mid-September — weeks before the poll. He also didn’t mention in the tweets that he has millions of stock options that must be exercised before next August, when they expire.

The poll resulted in a decisive vote for Musk to sell and sent Tesla shares down 16% in the first two days of the week. The stock pared those declines Wednesday, closing up 4.3%, and rose 2.5% before the start of regular trading Thursday. 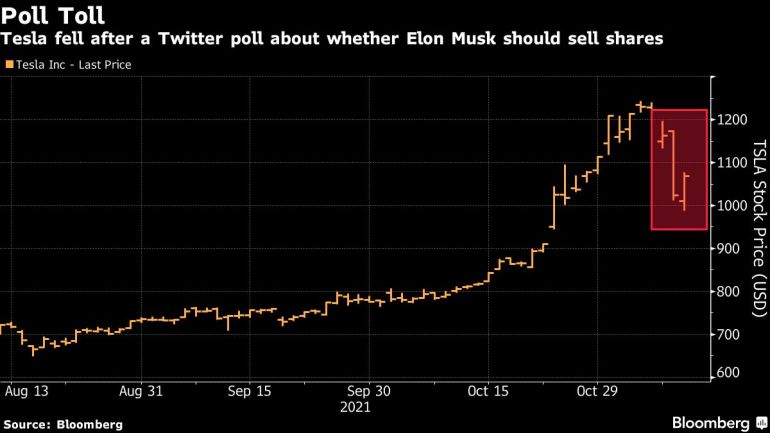 On Monday, Musk offloaded about $1.1 billion worth of stock to pay income taxes on equity options that he also exercised that day, two of the filings showed. On Tuesday and Wednesday, he carried out the remaining sales. The filings detailing those disposals didn’t indicate that they were pre-planned.

The documents shed no light on whether Musk’s weekend Twitter poll had any bearing on his decision to carry out some or all of the transactions – or whether he’ll keep selling until he’s met the 10% threshold. To get there, he’d have to get rid of roughly 17 million shares, and even more if he also includes exercisable options in his total holdings.

The options Musk exercised came from a big award he received in 2012. Taxes on such transactions are usually covered by immediately disposing of some of the newly acquired shares. Earlier this year, Musk said publicly that he likely would exercise options earned from the 2012 award in the near future.

It’s possible that the option exercises and related sales would have been executed regardless of the Twitter poll’s outcome, given that they were made under the pre-arranged plan. But the terms of such plans aren’t subject to public disclosure, and executives have wide latitude to cancel or modify them at any time.

The headline-grabbing Twitter referendum pummeled Tesla’s shares on Monday and Tuesday, wiping out $50 billion from Musk’s net worth.

The billionaire last sold shares in 2016, when he exercised options and liquidated some of the newly acquired stock to cover about $590 million of income taxes.

In his Nov. 6 poll announcement, Musk wrote that “much is made lately of unrealized gains being a means of tax avoidance, so I propose selling 10% of my Tesla stock.” Almost 58% of the 3.5 million votes were cast in favor of a sale.

Musk, 50, is the world’s richest person with an almost $300 billion fortune, according to the Bloomberg Billionaires Index.