The U.K. will reserve a key role for nuclear power in the nation’s electricity system as a backup for renewables in a plan to phase out natural gas by 2035.

Fossil fuels will no longer be used to generate power by the middle of the next decade as the U.K. tackles the double threat of climate change and an energy supply crunch that has sent prices spiraling to record highs. The government says the plan is “a landmark move to end Britain’s dependency on volatile fossil fuels.”

The size of the task is huge. The U.K. remains heavily reliant on gas with 38% of electricity demand being met by the fuel. The government says that nuclear is a key part of reaching net zero but plans to get new projects built have been slow with financing a sticking point. Prime Minister Boris Johnson committed in December to supporting at least one large-scale nuclear project by 2025 and has been in talks with Electricite de France SA for almost 10 months trying to hammer out a deal.

“The more I look at this, I think nuclear has to be part of the solution,” Business Secretary Kwasi Kwarteng said. “What we need to do in this country is have a cheap, affordable system, something that’s sustainable, and something which we can rely on ourselves, which protects us from the vagaries of international price movements.”

The U.K. was successful in cutting emissions with a bold move to phase out coal by 2024. That spurred investment in clean sources of power and more than half of the electricity now comes from low-carbon sources. The nation relies on gas particularly in winter when demand is higher and to turn up and down to meet intermittent renewable generation, a role to which nuclear is less suited. 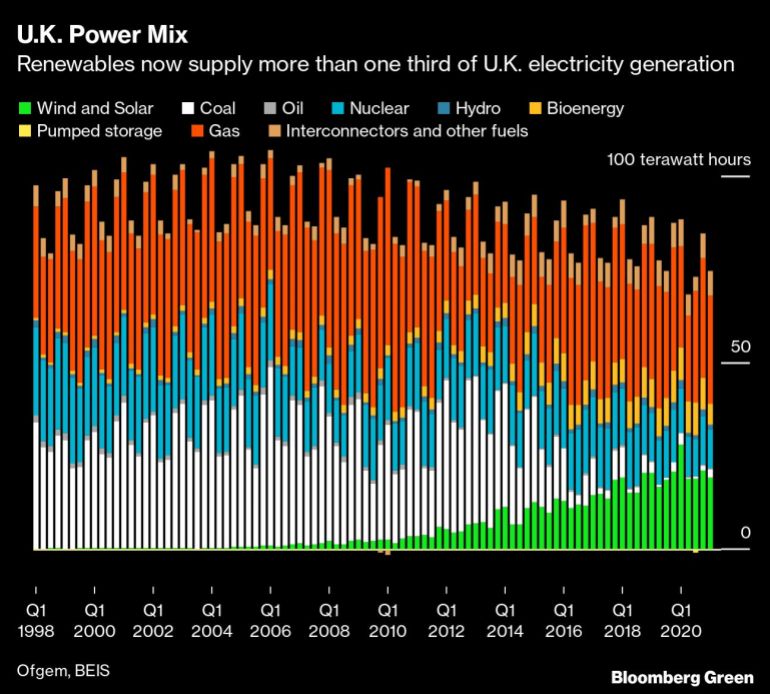 Power demand is expected to be at least one third higher by 2035 as electrification drives decarbonization in other sectors, according to Matt Jones, lead EU power analyst at ICIS.

“Though this sends positive commitment across the industry, it will be difficult to achieve unless we find a credible and realistic plan to produce power when the wind does not blow,” Jones said.

Kwarteng has promised to set out a strategy this month for how the U.K. will reach net-zero emissions by 2050. He’s also expected to unveil a long-awaited plan on how to decarbonize the country’s heating supply.

EDF’s Hinkley Point C is due to be finished in 2026 and the government is figuring out how to finance a second project at Sizewell C. Discussions have been complicated by Johnson’s administration exploring ways to remove state-owned developer China General Nuclear Power Corp. from all future projects in the U.K., Bloomberg reported in July.

With a 20-billion-pound ($27.2 billion) price tag, nuclear plants are an expensive option. Legislation is planned as soon as next month for a funding mechanism to spur the construction of new nuclear power plants to replace its aging fleet of reactors. The government said it will support large-scale projects and small and advanced modular reactors too.