By Shawna Kwan and Venus FengBloomberg

Another billionaire tycoon appears poised to come to the aid of embattled developer China Evergrande Group.

Hopson Development Holdings Ltd., a Hong Kong-listed real estate firm controlled by the billionaire Chu family, has agreed to buy a controlling stake in Evergrande’s property services business, Cailian reported Monday, citing people it didn’t identify. Evergrande Property Services Group Ltd. said in a statement that its shares were halted on Monday due to a pending announcement of a possible offer for shares of the company. Hopson declined to comment.

In contrast to Hui, who has been in the spotlight for years in the property sector, Chu Mang Yee is described as an “invisible magnate” by Chinese media for his low-profile. Chu and his son Chu Yat Hong own about 71% of Hopson Development combined, and the family is worth about $6.2 billion, according to the Bloomberg Billionaires Index. Mang Yee’s daughter Chu Kut Yung has been the developer’s chairman since January 2020.

Like Evergrande, Hopson is based in the southern Chinese province of Guangdong. Listed on the Hong Kong Stock Exchange since 1998, the shares have gained 40% this year while Evergrande has plunged 80%. Hopson has a market value of HK$60 billion ($7.7 billion), compared with just HK$39 billion for Evergrande.

In the early 2000s, Hopson was once seen as one of the five biggest developers in southern China along with Evergrande, Country Garden Holdings Co., Guangzhou R&F Properties Co. and Agile Group Holdings Ltd. It was also the first property developer in China to reach sales of 10 billion yuan ($1.55 billion) in 2004, according to Cailian.

Peers including Evergrande and Country Garden later surpassed Hopson to be the faces of China’s real estate market. The developer is comparatively little-known globally even though it’s the 13th-biggest property company in China by market capitalization.

Hopson Development plans to acquire a 51% stake in Evergrande Property Services to value the company at about HK$40 billion, a 28% discount to the unit’s current value of HK$55.4 billion, Cailian reported, after amending an earlier report on the valuation. Evergrande took the property unit public in December.

Hopson’s dollar notes are set for their biggest losses on record following the report. The 6.8% dollar bond due 2023 sank 5 cents on the dollar to 90.1 cents, Bloomberg-compiled prices show as of 1 p.m. in Hong Kong. 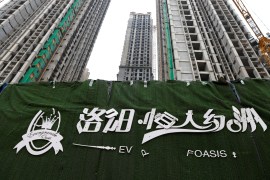 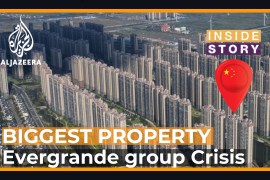 One of China’s largest property firms Evergrande has debts of more than $300bn. 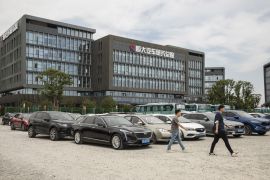 The warning shows the embattled property developer’s liquidity crisis is worsening across its business. 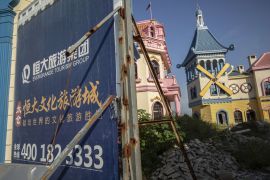 China Evergrande leaves bondholders guessing if it will pay up

Its silence on its offshore payment dues has left global investors asking if they will have to swallow large losses.