China Evergrande Group pulled back from the brink of default by paying a bond coupon before Saturday’s deadline, giving the property giant at least another week to come to grips with a debt crisis that has rattled investor confidence in the world’s second-largest economy.

The $83.5 million payment to international bondholders surprised some China watchers who had expected Evergrande to prioritize local creditors, suppliers and disgruntled homebuyers — many of whom are waiting for the company to make good on overdue obligations.

While the news helped fuel the biggest weekly rally in Chinese junk bonds since 2012, Evergrande creditors are still bracing for an eventual debt restructuring that could rank among the largest-ever in China. The company’s 8.25% bond due March 2022 is priced at just 26 cents on the dollar even after rallying on Friday, a sign investors expect deep haircuts.

Evergrande’s coupon payment, which came at the tail end of a 30-day grace period, marked the latest twist in a saga that has roiled China’s $860 billion offshore credit market and cast a pall over a real estate sector that accounts for about a quarter of economic output. Senior Chinese policy makers have tried to reassure investors in recent days that risks from Evergrande are contained, even as they signal a reluctance to bail the company out.

“The payment looks like an attempt to kick the can down the road,” said Wu Qiong, executive director at BOC International Holdings. “Nevertheless, it’s positive and buys the time Evergrande needs for asset sales, strengthening the base-line case of an orderly restructuring.”

With more than $300 billion in liabilities, billionaire Hui Ka Yan’s developer has become one of the biggest casualties of Chinese President Xi Jinping’s years-long effort to wring the excesses out of the country’s debt-laden real estate sector. The question looming over global markets is whether Xi can tackle the problem — and pull off a sweeping campaign to bring “common prosperity” to China — without derailing the economy’s fragile recovery from the pandemic.

Evergrande’s coupon payment was initially due on Sept. 23. The company wired the funds on Thursday and investors will receive the money before Saturday, people with knowledge of the matter said, asking not to be identified because the transaction is private.

The 30-day grace period for Evergrande’s next dollar coupon payment ends on Oct. 29. The company needs to pay interest on another four dollar notes this year and has a hefty wall of maturing debt in 2022, with some $7.4 billion coming due in onshore and offshore bonds.

A spokesperson for Evergrande, Asia’s largest issuer of junk-rated debt, declined to comment. 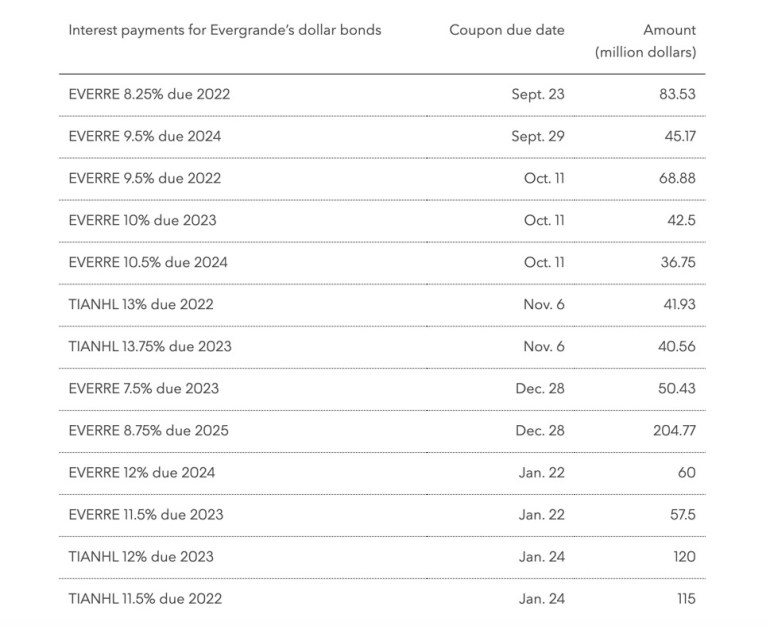 Some investors, including credit specialist Marathon Asset Management, have been betting that Evergrande’s debt still offers value despite the developer’s troubles. Marathon Chief Executive Officer Bruce Richards said on Bloomberg Television last month that his firm has been buying Evergrande bonds and planned to add to its holdings.

Others are less optimistic. The company recently abandoned talks to sell a stake in its property-management arm and said it’s not made further progress on asset sales. Evergrande’s real estate sales plunged about 97% during peak home-buying season, further crimping its ability to generate funds.

Hui’s wealthy backers are also starting to lose faith. Chinese Estates Holdings Ltd., controlled by the family of property mogul and fellow poker pal Joseph Lau, has been selling Evergrande stock and said it could unload its entire stake.

“Evergrande is a candle burning on both ends, it needs to address declines in revenue and at the same time find cash for looming repayments,” said Justin Tang, the head of Asian research at United First Partners. “Nothing short of a restructuring or white knight will do.”