In normal economies, currencies weaken in times of difficulty, but something counter-intuitive is happening in North Korea: the won is surging just as things are getting worse.

Kim Jong Un’s country has been hit by the toughest sanctions in its history, massive flood damage and an unprecedented pandemic that cut off most of its trade. The economy posted its sharpest drop in more than two decades last year, while its people are facing one of the worst food shortages in more than 10 years.

But the North Korean won has jumped 25% against the dollar this year, calculated on a monthly average basis using the numbers reported by the two media organizations that track it. That follows a 15% surge in 2020.

There are competing theories for why it’s happening, ranging from Kim’s pandemic border closure killing demand for foreign currencies to the isolated country instituting a crackdown on their use. Whatever the reason, most observers agree it’s no good thing.

“A currency normally depreciates when a country is facing troubles, but the opposite is happening in North Korea,” said Kim Byung-yeon, a professor of economics at Seoul National University. The North may be trying to boost the won to support the economy, but continuing such attempts “could end up harming the real economy even more.” 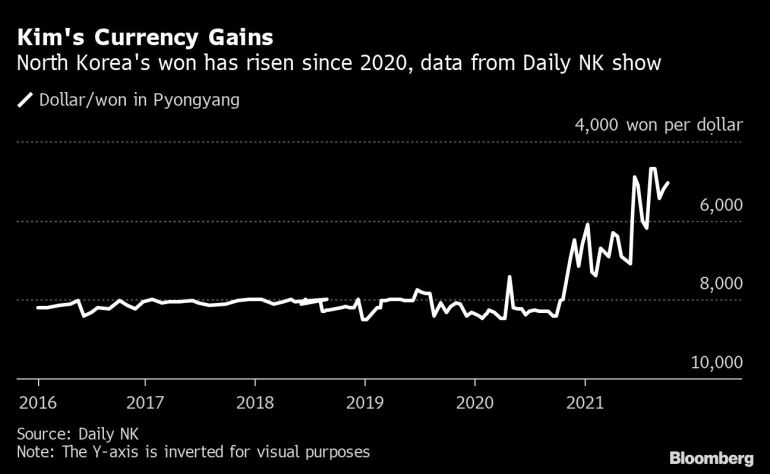 North Korea’s unofficial exchange rate, which is tracked by the two news outlets, is formed in the country’s “jangmadang,” local markets that have grown to become a large informal economy. Its official rate has been steady at around 100 won per dollar for the past decade, an artificially strong level with no use as an indicator. The unofficial rate is around 5,200 won per dollar.

Running a private currency exchange is illegal in North Korea, so the two media companies, Asia Press International of Japan and Seoul-based Daily NK, use secret human networks inside the isolated country to compile their rates, according to Jiro Ishimaru, a journalist at Asia Press International, and Lee Sang Yong, editor in chief of Daily NK. They get information on trading of the currencies at the jangmadang.

According to Daily NK, the rate was generally steady at about 8,000 won per dollar since early 2013, but the won started gaining last year, reaching a monthly average of 4,723 in August, the strongest since June 2012.

Many observers say the coronavirus pandemic is behind the surge.

The U.S. imposed a full trade and financial embargo in 2017, on top of sanctions already in place from the United Nations, but goods still made it into North Korea, smuggled in from China.

But that all changed when North Korea shut its borders in 2020, according to Lim Soo-Ho, a senior researcher at the Institute for National Security Strategy, a government-funded think tank in Seoul.

“Foreign currencies were still in demand” until then, Lim said. “As imports into the North crashed, demand for overseas currencies kept falling, too.”

Imports from China, North Korea’s biggest trading partner, dropped more than 90% year on year every month from August 2020 to February this year, with declines continuing thereafter, according to the Korea International Trade Association, a trade group in Seoul. Satellite images show how once-busy bridges and roads between North Korea and China became empty after the border closure, according to Ramon Pacheco Pardo, a professor of international relations at King’s College London. 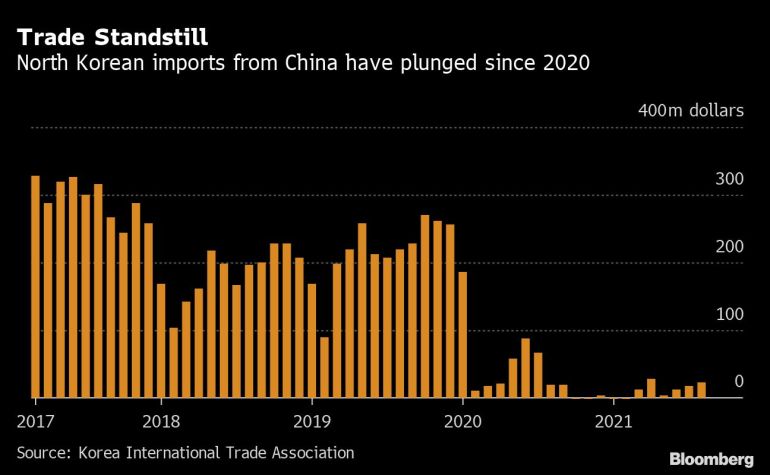 The slump in imports isn’t the only reason for the surge, according to Seoul National University’s Kim. The won’s gains imply that foreign currencies have lost their allure within North Korea, too, and that suggests some kind of government crackdown on their use, he said.

“Even though imports dropped, the won wouldn’t have strengthened so much if the dollar remained in demand in the local markets,” Kim said.

Many retail outlets in the capital Pyongyang have stopped accepting dollars or prepaid overseas currency cards from foreigners in the country, and are instead asking them to pay in won, the Russian embassy said in a Facebook post in October last year.

Financial authorities were ordering residents to report their holdings of foreign currencies and deposit them in banks, Daily NK reported this April, citing an unidentified person in North Korea familiar with the matter.

Most North Koreans keep their dollars at home and use them to trade goods, according to Kang Mijin, chief executive officer of NK Investment Development, a data services company that provides research and information on North Korean markets. That’s especially true since a massive currency reform in 2009 cut the value of their won holdings by more than 90%.

“The North may have taken this period of isolation as an opportunity to restore its socialist systems,” said Seoul National University’s Kim. “And for the government to retain its control over that system, the key would be to return to the won.”

North Korea may be trying to protect its people from economic hardship by strengthening the won and in turn causing deflation, Kang of NK Investment Development said.

There’s even a theory that mysterious North Korean currency brokers may be accelerating the won’s gains through speculative trading.

Whatever the truth is, analysts say the won’s unusual surge won’t end well.

The drop in trade and strengthening currency point to a broken economic system, the Korea Development Institute, a South Korean state-run think tank, said in a January report. North Korea may be facing its worst economic crisis since the 1990s, it said.

While the currency’s gain may benefit government-backed companies and households who don’t hold dollars, the increasing volatility is negative for the country as a whole, Choi Ji-young, a research fellow at the Korea Institute for National Unification, a South Korean government-affiliated research institute, wrote in an August paper. Turbulent markets increase uncertainties and hinder resource allocation, she wrote.

For “ordinary North Koreans, it’s a warning sign,” said Pardo of King’s College London. “The poorest North Koreans, who are the ones who have less access to the won, could see their standard of living deteriorate compared to those who can more freely access the currency.”

“Kim’s regime has paid more attention to public sentiment than any other government,” Choi said, noting that official remarks since the pandemic started suggest the government is trying hard to prevent this becoming a social issue.

“But if the current situation keeps going for a extended period of time, things could turn ugly,” she said.