European gas surged to a record 100 euros as China stepped up a global fight for energy supplies, in a move that threatens to derail the economic recovery. Prices later retreated.

In volatile trading, benchmark futures gained as much 2.3% on Friday before retreating. China ordered its state-owned energy companies to secure supplies for this winter at all costs, according to people familiar with the matter. That will intensify a battle for liquefied natural gas and coal cargoes just as flows into Germany via a key Russian pipeline tumbled.

Energy prices are rising from the U.S. to Europe and Asia as the economy recovers from the global pandemic and people return to the offices. Europe is struggling to secure enough gas and coal ahead of the winter, with rising prices forcing some of industrial giants from fertilizer producers CF Industries to Yara International ASA and chemicals giant BASF SE to shut plants or curtail output. 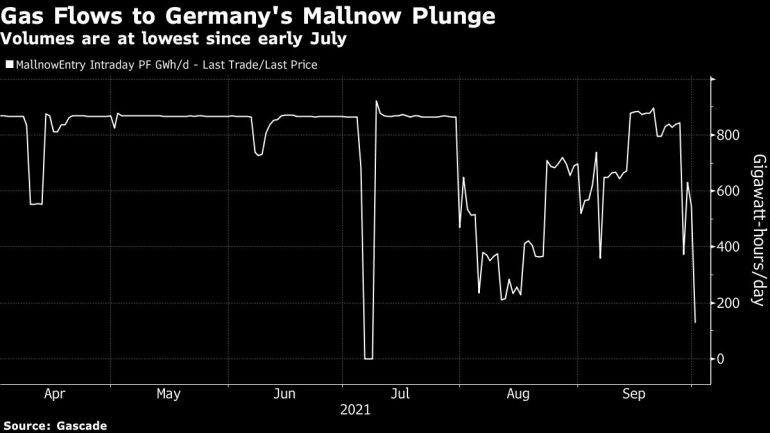 Governments are struggling to respond to the crunch, with an increasing number taking steps to try to shield voters from the worst effects of rising prices. France will block any new increase in regulated gas tariffs and cut taxes on electricity, Prime Minister Jean Castex said on TF1 on Thursday.

“The volatile trading already shows that no one really knows how high gas can go, but we’re definitely in for a wild ride,” said Niek van Kouteren, a senior trader at PZEM, a Dutch energy company. “The question will be: where there will be demand destruction? If you then see governments stepping in and subsidizing gas prices, like France announced yesterday, there is no incentive at all to lower your demand.”

Dutch gas futures surged to 100 euros a megawatt-hour, before retreating 0.7% to 97 euros by 1:05 p.m. in Amsterdam. Prices were swinging between gains and losses as traders weighed the potential for demand curbs as more factories shut or reduce production.

European storage sites are just under 75% full, the lowest level for this time of year in more than a decade. Inventory withdrawals typically start by the end of the month, depending on the weather. So far, temperatures in northwest Europe are forecast to be largely within seasonal norms in October.

Flows from top supplier Russia into Germany’s Mallnow via the key Yamal-Europe pipeline also dropped just as the heating season begins. At an auction on Thursday, no extra pipeline capacity was booked to deliver fuel to the Mallnow compressor station the following day.

“Gas can go now as high as it needs to knock demand out,” said Andreas Gandolfo, leader of the European power team at BloombergNEF. “For some European industries gas has become too expensive. For some, including us, who have gas heating at home, it can probably go a lot higher before there is a decision to switch off.”

The treat of more industrial closures in Europe also risks stalling the rally in European carbon futures. Some of the companies curtailing production or closing factories are energy-intensive users and need to use carbon permits to cover their emissions. The slowdown could lead them to sell their allowances, said Trevor Sikorski, head of natural gas and energy transition at the London-based consultants Energy Aspects. 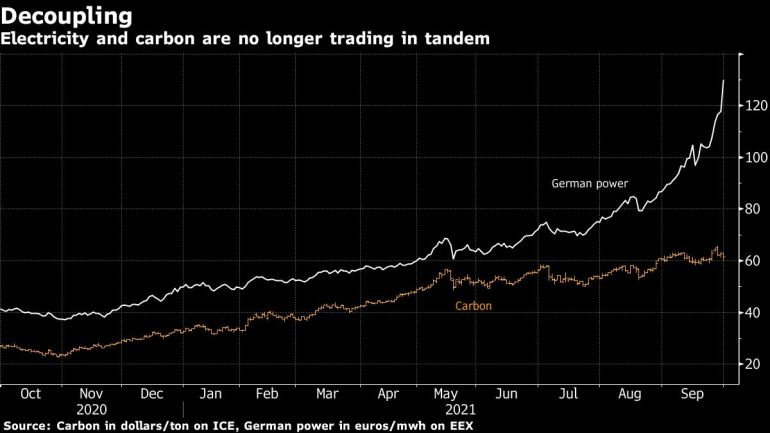 In Asia, the price of liquefied natural gas surged to a record $34.47 per million British thermal units on Thursday. Both the cost in Asia and in Europe are about $190 a barrel of crude oil equivalent.

“Longer term, prices are of course unsuitable high and we do expect gradual normalization next year,” said Oystein Kalleklev, chief executive officer of Flex LNG Ltd. “But with empty inventories there will be a fight for restocking next summer so it will take a bit more time for the market to rebalance.”