By Rita Nazareth and Lu WangBloomberg

Stocks rallied a day after violence rocked the U.S. Capitol, with investors firmly focused on the prospect for more stimulus and the likelihood that calm will prevail as Joe Biden takes the presidency.

The Dow Jones Transportation Average — a proxy for economic activity — also hit a record, while the Russell 2000 Index of small caps extended a three-day advance to almost 8%. Tesla Inc. surged after RBC Capital Markets upgraded the stock, noting it was “completely wrong” with a previous bearish view.

Another notable call came from Goldman Sachs Group Inc., which said banks have “moved back into vogue” due to optimism about fiscal aid and rising rates. Bitcoin pared gains after topping $40,000.

House Speaker Nancy Pelosi and Senate Democratic leader Chuck Schumer demanded that President Donald Trump’s cabinet immediately remove him from office and threatened a new drive to impeach him if they don’t act.

Democrats, who already have a majority in the House, are set to take control of the Senate and presidency, paving the way for Biden to bring his legislative agenda to life and reshape the economy.

While campaigning in Georgia before the runoff elections, he vowed that $2,000 stimulus checks would be sent out “immediately” if his party won the state. 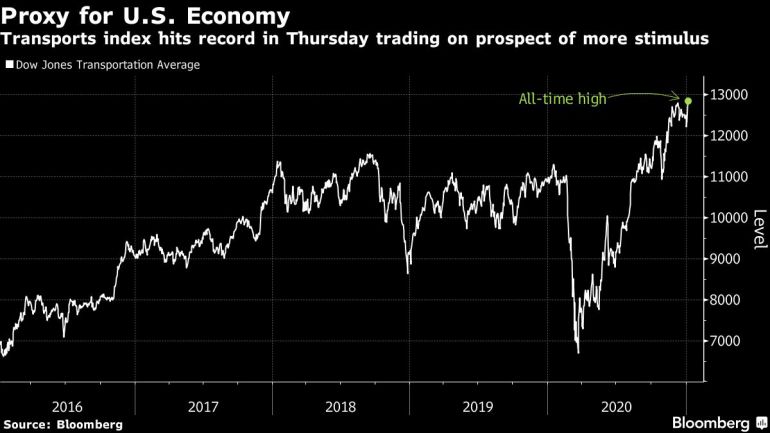 “Markets (rightly, in our view) see the U.S. government as ultimately a stable-enough set of institutions even if things occasionally go pear-shaped,” Nick Colas, co-founder of DataTrek Research, wrote in a note to clients. “Politics play second fiddle to economic and corporate fundamentals when it comes to setting asset prices. The country’s economic future coming out of the pandemic remains promising.”

Data Thursday showed that growth at U.S. service providers unexpectedly accelerated as gains in business activity and new orders helped offset a decline in a measure of employment.