By Rita Nazareth and Claire BallentineBloomberg

U.S. stocks stabilized in the green, though remained well off session highs after protesters surged into the U.S. Capitol, forcing a lockdown that interrupted certification of the presidential election.

The S&P 500 trimmed its advance to 0.6% at the close of trading in New York, after rallying as much as 1.5% earlier Wednesday. Equities had been on track for a record, buoyed by speculation that Democratic control of Congress could unleash a torrent of spending to revive growth. That sparked a reflation trade, with investors pouring into small caps and banks, companies that benefit from an economic rebound. Tech shares lagged behind.

Democrats will take control of the U.S. Senate for the first time in six years, NBC and CBS said late in the day. Investors’ buoyant mood was pierced, but not sunk, when Vice President Mike Pence left the floor of Congress as hundreds of protesters swarmed past barricades surrounding the building where lawmakers were debating Joe Biden’s victory in the Electoral College.

“Apparently, elevated investor sentiment knows no bounds,” said Adam Phillips, director of portfolio strategy at EP Wealth Advisors. “Obviously, the reflation trade stemming from last night’s election results is driving the markets, but it takes a special set of blinders to ignore what we are seeing in real-time.”

Democrats claimed one of the two Senate seats contested in Georgia and led in the other tight race. Two wins would give Biden’s party control of Congress and smooth the path for some of his spending policies. That’s fueled bets that increased stimulus will boost the economy and spark inflation. The 10-year Treasury yield climbed past 1% for the first time since March. 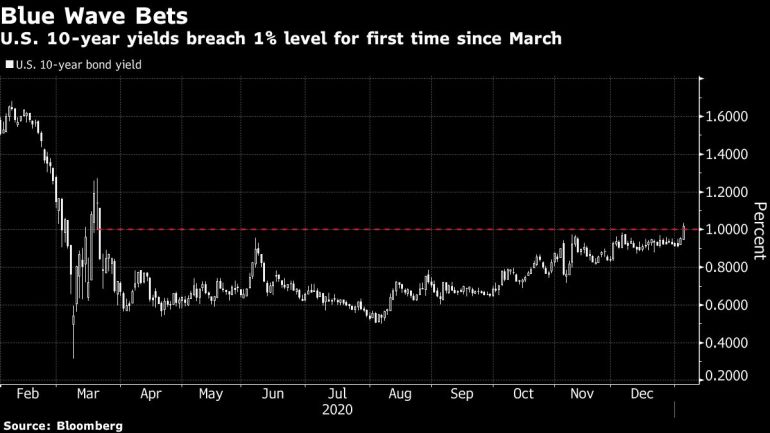 “The growth-into-value rotation may be reinforced after the results of the Georgia Senate election amid the prospect of a higher fiscal stimulus bill and steeper yield curve, which would benefit banks and other non-tech companies,” David Bahnsen, chief investment officer of the Bahnsen Group in Newport Beach, California, wrote in a note to clients.

Congress passed at year’s end a $900 billion spending deal to bolster an economy showing signs of slowing as the raging virus prompts stricter lockdowns across the country. The number of employees at U.S. businesses unexpectedly declined in December for the first time since April, underscoring the ongoing labor-market fallout from the pandemic. The figures preceded the monthly jobs report on Friday, which is projected to show weaker payroll growth.

U.S. 10-year breakevens — a market gauge of inflation expectations over the next decade — topped 2% this week for the first time since 2018, having gained in each of the last three months. While the pandemic is still raging with the rollout of vaccines in the early stages, the risk is that further signs of inflationary pressure could start prompting bets on Fed rate hikes.

For Matt Miskin, co-chief investment strategist at John Hancock Investment Management, the ball will be in the Fed’s court next and how policy makers will react to this evolving political backdrop.

“They have been wanting more fiscal support, well now they have it, and it is coming with a cost — higher interest rates based on Treasury yields rising,” Miskin noted. “We will see what the Fed’s pain threshold is for higher Treasury yields in the first half of 2021. The tug-of-war between monetary and fiscal policy will be key to markets. While the fiscal side is looking more promising based on the results today, monetary policy may take a step back.”