By Bailey Lipschultz and Elena Popina and Sarah PonczekBloomberg

The stock, face of the retail craze that’s gripped Wall Street and drawn scrutiny from Washington, gained 83% at 9:33 a.m. in New York before triggering a volatility halt. The stock plunged a record 44% in Thursday’s U.S. cash session. Other day-trader favorites also surged back after tumbling Thursday, although pared their gains from earlier highs.

GameStop’s rally was reignited by Robinhood’s decision to lift some curbs that prevented legions of investors from buying shares that had been going straight up for days. Worth less than $5 billion just a week ago, the stock has been propelled by day traders using Reddit forums to take on the Wall Street establishment. GameStop briefly became the largest member of the Russell 2000 Index after hitting a peak value of $33.7 billion Thursday. 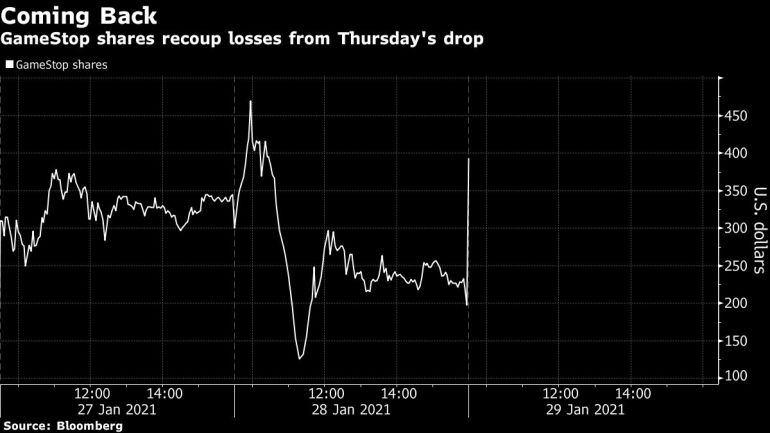 “The easing of restrictions on the trades will lead to increased volatility again,” said Michel Keusch, a fund manager at Bellevue Asset Management. “This is very worrying. The benefit from this reverse short attack will end, and these shares will collapse again, like cheese souffles.”

Citron Capital’s Andrew Left, one of the short sellers who has faced a reckoning in the battle with the growing groups on Reddit’s WallStreetBets forum, said the firm will discontinue offering short-sell analysis after 20 years of providing the service. Left said on Wednesday his firm closed out of a GameStop short bet in “the $90’s at a loss of 100%.”

AMC Entertainment Holdings Inc. rose 79% after falling 57% on Thursday and Koss Corp. added 64% after sliding 28% in the previous session.

Robinhood said clients would be able to make limited purchases of some of the companies that it blocked, but did not provide further details. Morgan Stanley’s E*Trade said it expects to resume normal trading operations Friday, while Trading 212, another app, said it enabled trading of GameStop and AMC, two of the stocks whose meteoric gains have delivered massive losses to some prominent hedge funds that held large short positions in them.

Robinhood’s decision Thursday to rein in the risk to itself by banning certain trades and unwinding client bets – igniting an outcry from customers and even U.S. political leaders – came after the stock market’s central clearing hub demanded large sums of collateral from brokerages that for weeks had facilitated spectacular jumps in shares such as GameStop. The trading platform also said it was raising an emergency infusion of more than $1 billion from its existing investors.

The move by the brokerages sent this month’s retail favorites tumbling Thursday, though their rebound sets up another rough patch for the Wall Street establishment that has been under pressure from Reddit-charged day traders. After 20 years of publishing research notes, Citron Research said it will no longer put out short reports, the firm said in a tweet.

“This is a wake-up call for the tighter regulation of short selling, stock lending and margin trading through put and call options, all of which can lead to an open season for market manipulators,” said Harry Nimmo, small-cap investment director at Aberdeen Standard Investments. 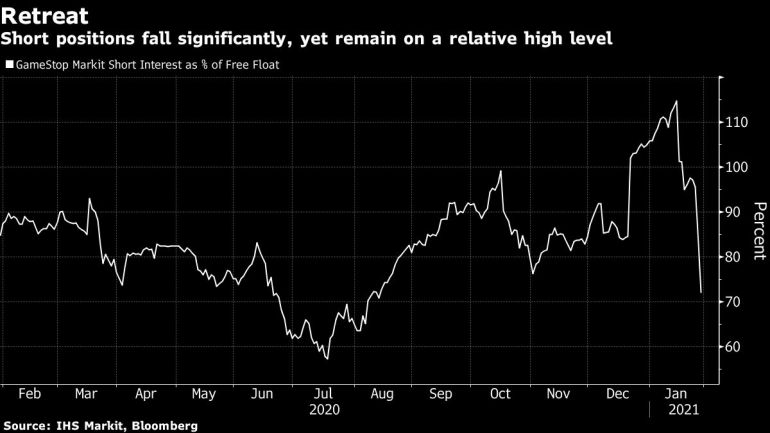 GameStop’s rally back above $300 puts a renewed spotlight on Friday’s weekly option expiry. There’s currently more than 9,000 calls with a strike at $320 expiring, putting them back in the money.

More broadly, the prospect of continued volatility driven by retail-trader speculation weighed on stock prices Friday, with the Europe Stoxx 600 Index falling 1.4% and the S&P 500 Index opened lower by 0.8%.

Defending the WallStreetBets forum that has been the launching point for many of this week’s blistering rallies, Reddit Chief Executive Officer Steve Huffman said Thursday that while it is “by no means perfect,” “they’ve been well in the bounds of our content policy.”

Users on the forum jumped past 4 million as the phenomenon became a national sensation, reaching the doorsteps of both new President Joe Biden’s administration and Federal Reserve Chairman Jerome Powell. The Senate has said it will order a hearing, while other lawmakers ripped the brokerages for denying access.