Several big European financial institutions — BNP Paribas, Credit Suisse and ING — have committed to halting the financing of the trade of oil from the Amazon region of Ecuador.

The three banks that have recently indicated such a policy change — in emails sent to environmental groups Amazon Watch and Stand.earth — are collectively responsible for $5.5bn in Ecuadorian Amazon oil financing since 2009.

The decisions come several months after a critical report published last August by those two groups exposed how a handful of banks in Europe have provided $10bn in financing for over 155 million barrels of oil exported from South America to the United States.

In total, that fuel has produced an estimated 66 million metric tonnes of carbon dioxide, equivalent to the annual emissions from 17 coal-fired power plants. More than 40 percent of that oil has gone to refineries in the US state of California.

While the banks are expected to release binding details over the coming months, BNP Paribas has already publicised its new commitment to not finance “the seaborne exports of oil from the [coastal] Esmeraldas region in Ecuador”.

Claire Schiff, a spokesperson for the Paris-based bank, told Al Jazeera that the company is continuously improving guidelines for “investment activities in sectors that present ESG [environmental, social and governance] risks”.

As one of the Earth’s most biodiverse ecosystems, the Amazon Sacred Headwaters is home to 500,000 Indigenous people. Their health and livelihoods are threatened by deforestation and the expansion of industrial drilling in their territories around Yasuni National Park and elsewhere.

In a press release issued on Monday, Amazon Watch billed the corporate moves as the “first time global commercial banks have adopted policies that exclude finance for extractive activities in the Amazon rainforest”.

Oakland, California-based Amazon Watch, a non-profit focused on protecting the environment and Indigenous communities, has said that banks can do much better at fulfilling sustainability pledges. They cite how Amazon oil extraction contributes to climate change and adversely impacts the health of local groups — including the toxic effects of a November 27 oil spill in the Shiripuno River where the Waorani people live.

“Over the last decade, BNP, ING and Credit Suisse have provided over 50 percent of financing for the Amazon oil trade, a key piece of the Amazon oil supply chain,” said Moira Birss, climate and finance director for Amazon Watch. “And thus, their commitments to end financing for this trade represent an important step toward forest protection and respect for Indigenous rights in the Amazon.”

“However, these new commitments do not extend to other parts of the Amazon oil supply chain, like extraction activities,” she told Al Jazeera, explaining that the new commitments relate to just one segment of the financial backing that supports the fossil fuel industry. “Therefore, we view these announcements as necessary but insufficient to live up to their climate and human rights commitments.”

Additional institutions are expected to come forward over the coming months to make similar pledges.

“We have been in conversation with other banks named in our recent Amazon oil trade finance report, and are confident that others will follow,” Birss added.

In mid-2021, Stand.earth and Amazon Watch plan to release an updated scorecard on the performance of all financial actors previously identified in their joint report.

Birss said the goal will be to assess “financial institutions’ involvement in the Amazon oil supply chain and how their actions compare to their climate and sustainability commitments”.

It will also have rankings for US banks Citigroup, JPMorgan Chase and Goldman Sachs. Japanese financial services company MUFG will be rated as well.

Angeline Robertson, an investigative researcher at Stand.earth, said the banks’ level of commitment to winding down financing of extractive activities will be monitored.

“We use our in-house oil-supply-chain tracking tool developed by the Stand Research Group to monitor their trade finance activity,” Robertson told Al Jazeera.

She added that the same tool already helped her organisation identify an uptick in oil trade financing in late 2020 for the French companies Natixis and Societe Generale.

In a December email to the two environmental groups made public on Monday, ING said that it was engaging with clients about the Amazon oil issue and had “declined any new proposed transactions and therefore new business in trade linked to oil & gas in Ecuador”.

In a statement to Al Jazeera, ING spokesperson Daan Wentholt confirmed that the August report had compelled the Amsterdam-based bank to examine “the concerns of local indigenous communities and the impact of oil and gas exploration on the Ecuadorian Amazon”.

Wentholt added that “research and resulting engagements are ongoing”, yet some Indigenous groups remain unconvinced that the European finance sector’s shift is sufficient.

Jose Gregorio Diaz Mirabal, general coordinator of the Congress of Indigenous Organizations of the Amazon River Basin, told Al Jazeera: “We are sure we will continue to defend Indigenous territories, but we are not sure that our actions are changing the environmental reality — because the data on deforestation, fires, pandemic, extractivism and murders say otherwise.”

But Marlon Vargas, president of the Confederation of Indigenous Nationalities of the Ecuadorian Amazon, believes “the decision of these banks to stop financing trade of Amazon crude from our territories is a major milestone in our effort to protect our lands, our lives, and our cultures.”

“For too long, the oil industry has wreaked havoc on our peoples, violated our rights, felled our forests, taken our territories, and created climate chaos,” he said.

“The banks that finance this destruction are complicit in what is a genocidal threat for us, and an existential threat for humanity and our planet,” said Vargas, who is calling for the development of economic alternatives for Indigenous communities.

Amazon Watch and Stand.earth are demanding that banks refrain from financing all Amazon oil-related activities, “unless adequate remediation of contamination occurs, rights to health of local communities is guaranteed, safeguards are in place to prevent future spills … and a wind-down of existing wells in line with global climate goals”.

To meet the Paris Agreement aim of limiting global warming to within two degrees Celsius, companies in Europe are increasingly falling in line.

“Credit Suisse reviews and updates its sector-specific policies on a regular basis,” Yannick Orto, a spokesman for the Swiss firm, told Al Jazeera.

“As part of our commitments to address climate change, protect biodiversity, and respect human rights, we introduced further restrictions on financing fossil fuels in the course of last year,” he said. “This is in line with our ambition to become a sustainability leader in the financial industry, which we introduced in 2020.”

“In this context, we also announced our ambition to provide at least 300 billion Swiss francs ($339bn) of sustainable financing to support [climate] transition strategies over the next 10 years,” Orto added.

From the Amazon to Zurich, environmental advocates say that these funds cannot materialise soon enough. 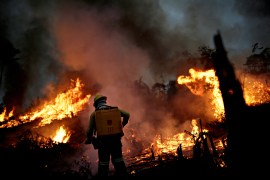 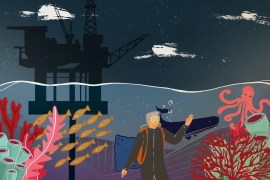 Mining Earth: From the Amazon to the ocean’s depths 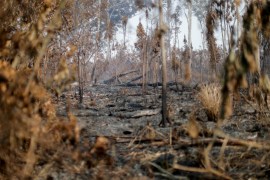 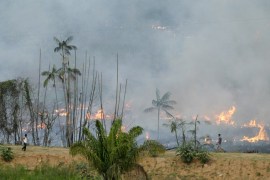