United States President Joe Biden took executive action on Friday to provide a measure of relief to millions of Americans while Congress begins to consider his request for $1.9 trillion to help the US recover from the coronavirus pandemic.

“The crisis is only deepening. It is not getting better,” Biden said as he signed two executive orders to increase the availability of food aid, protect job seekers on unemployment and give federal workers and contractors a $15 hourly minimum wage.

Biden inherited a worsening economy from former President Donald Trump as the coronavirus pandemic surged and businesses continued to cut back or close. More than 16 million Americans were unemployed at the beginning of January and 900,000 filed new claims for unemployment last week. Nearly 30 million households lack secure access to food.

“This is happening today, in America. And this cannot be who we are, the country. These are not the values of our nation. We cannot — will not — let people go hungry. We cannot let people be evicted because of nothing they did themselves. We cannot watch people lose their jobs. And we have to act. We have to act now,” Biden said.

Most economists believe the US can rebound with strength once people are vaccinated against the coronavirus, but the situation is still dire as the disease has keeps many businesses and schools closed. More than 412,000 people have died in the US from COVID-19 and the death rate has spiked above 4,000 a day, according to Johns Hopkins University’s Coronavirus Resource Center.

One of Biden’s orders asks the US Department of Agriculture to adjust the eligibility rules for food assistance enabling the government to provide more money for food to people whose families are in need.

Children who are unable to get school meals because of remote learning could receive a 15 percent increase in food aid, according to a fact sheet provided by the White House. The lowest-income households could qualify for emergency benefits from the Supplemental Nutrition Assistance Program. A government formula for calculating meal costs would become more generous.

The order tries to make it easier for people to claim direct payments from prior aid packages and other benefits. In addition, it would create a guarantee that workers could still collect unemployment benefits if they refuse to take a job that could jeopardise their health.

The order starts a 100-day process for the federal government to require its contractors to pay at least $15 an hour and provide emergency paid leave to workers, which could put pressure on other private employers to boost their wages and benefits.

These orders arrive as the Biden White House is beginning to schedule meetings with members of Congress to discuss his $1.9 trillion relief proposal.

Biden’s larger $1.9 trillion proposal has support ranging from democratic socialist Senator Bernie Sanders to that of the US Chamber of Commerce. But not all components of the package are popular, and opposition from Senate Republicans could delay passage.

“The American people cannot afford to wait,” said Brian Deese, director of the White House National Economic Council. “So many are hanging by a thread. They need help, and we’re committed to doing everything we can to provide that help as quickly as possible.”

The White House has begun to reach out to US lawmakers to talk through the elements of the plan.

Meanwhile, the roll-out of the Trump administration’s vaccination programme has been uneven and will stall without additional support from Congress, Biden administration officials have said.

White House press secretary Jen Psaki acknowledged at a Friday briefing that the programme faces “operational issues” at the state level and the Biden team is still trying to determine how much supply of the vaccines is available.

“Our team, as you know, has been on the ground for about 48 hours,” Psaki told reporters at the White House.

Neil Bradley, chief policy officer at the Chamber of Commerce, told reporters Thursday that Congress should act quickly to approve roughly $400bn for nationwide vaccinations and reopening schools with bipartisan support rather than drag out negotiations.

“We cannot afford six months to get the vaccination process working right … We can’t even wait six weeks to get vaccinations distributed and schools reopened,” Bradley said. 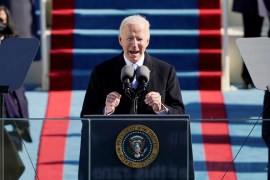 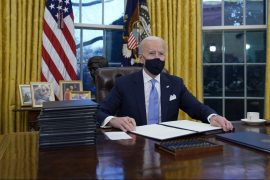 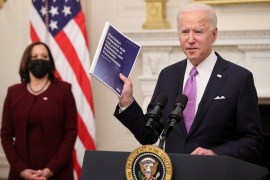 The new US president announces a strategy to deal with the virus but warns it will take time to end the pandemic. 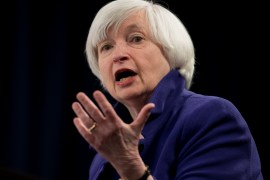