Oman’s government will finance most of its budget shortfall in 2021 by borrowing to plug a fiscal gap battered by a decline in oil prices and the coronavirus pandemic.

The Persian Gulf state is looking into borrowing that will cover 73%, or 1.6 billion rials ($4.2 billion), of the country’s 2.2 billion-rial shortfall, with the remaining 600 million rials to be drawn from its reserves, according to a post on Twitter by the state-run Oman News Agency on Friday. The government based its 2021 budget plan on an oil price of $45 per barrel. 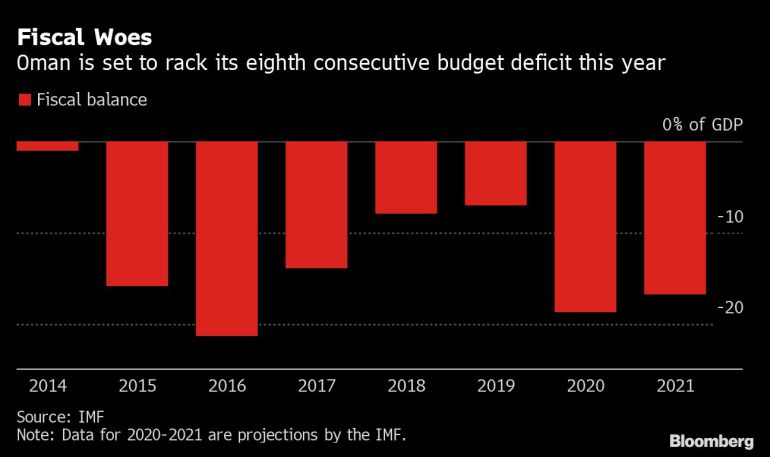 Other highlights from Oman’s 2021 budget:

Oman has taken measures such as reduced spending and plans to impose a 5% value-added tax in 2021. It will implement developmental projects valued at 371 million rials as part of the effort to redirect resources toward “national priorities,” according to the Oman News Agency.

The sultanate’s economy is estimated to have shrunk 10% in 2020, according to projections from the International Monetary Fund, among the steepest in the Gulf. Bond spreads in the nation have increased in 2020 compared to neighbors and “while financial buffers remain ample in Kuwait, Qatar, Saudi Arabia and the United Arab Emirates, they are significantly weaker in Bahrain and Oman,” according to a report by the fund.

The largest oil exporter outside of OPEC, Oman has been hammered by the coronavirus pandemic as well as lower crude prices and has raised the possibility of assistance from its Gulf neighbors. The country is rated at junk levels by three of the leading rating firms.

The sovereign has three bonds maturing through 2023. This year, its $1.5 billion issuance matures in June.

(Updates with chart, background after second paragraph.)
–With assistance from Turki Al Balushi.