The world’s biggest oil company is getting squeezed by its main shareholder, the Saudi Arabian government.

Even with crude dropping to $40 a barrel this week and its cash flow plunging, Saudi Aramco is trying to pay a $75 billion dividend this year, almost all of it to the state. Concerns are mounting, including among global fund managers who bought into the company during a record initial public offering last December, that Aramco is putting strategic projects on ice and racking up debt too quickly.

Aramco has been the country’s cash cow for decades. But the pressure it faces has been thrown into sharper relief by the coronavirus-induced collapse in energy demand – Brent crude fell another 5% on Tuesday – and now that it’s a listed firm with shareholders from New York to Tokyo.

Crown Prince Mohammed bin Salman, the 35-year-old de facto ruler, has pledged to diversify the kingdom from oil and spend billions developing everything from futuristic cities to tourism and financial services. For that, he needs Aramco’s money.

“The crown prince has basically decided the company is a piggy bank he can raid to fund his other projects,” said Jean-Francois Seznec, a senior fellow at the Atlantic Council of Washington’s Global Energy Center, and a Middle Eastern specialist. “It will limit how much they can invest in things like maintaining the oil fields and developing new technologies.”

The government has previously leveraged Aramco’s balance sheet to bolster its own finances. But it hasn’t happened to this extent for at least 20 years, according to one banker who’s worked with the company since the 1990s.

Fitch Ratings Ltd. estimates the Saudi budget deficit will rise to 15% of gross domestic product in 2020, one of the widest levels in the Middle East. The government’s revenue fell almost 50% year-on-year in the second quarter.

Aramco promised to pay $75 billion annually to investors for five years after the IPO. Eager to attract foreign funds and achieve a world record valuation of $2 trillion, the government even said last year it may forgo its own portion of the dividend and maintain it for others if oil prices fell.

Instead, the axe is falling elsewhere. Aramco has slashed capital expenditure by tens of billions of dollars, laid off hundreds of mainly foreign workers and shuffled its top management as part of a plan to sell some assets.

It paid a dividend of $37.5 billion in the first six months of 2020 even as rivals Royal Dutch Shell Plc, BP Plc and Eni SpA cut theirs. The payouts were almost double Aramco’s free cash flow of $21 billion. 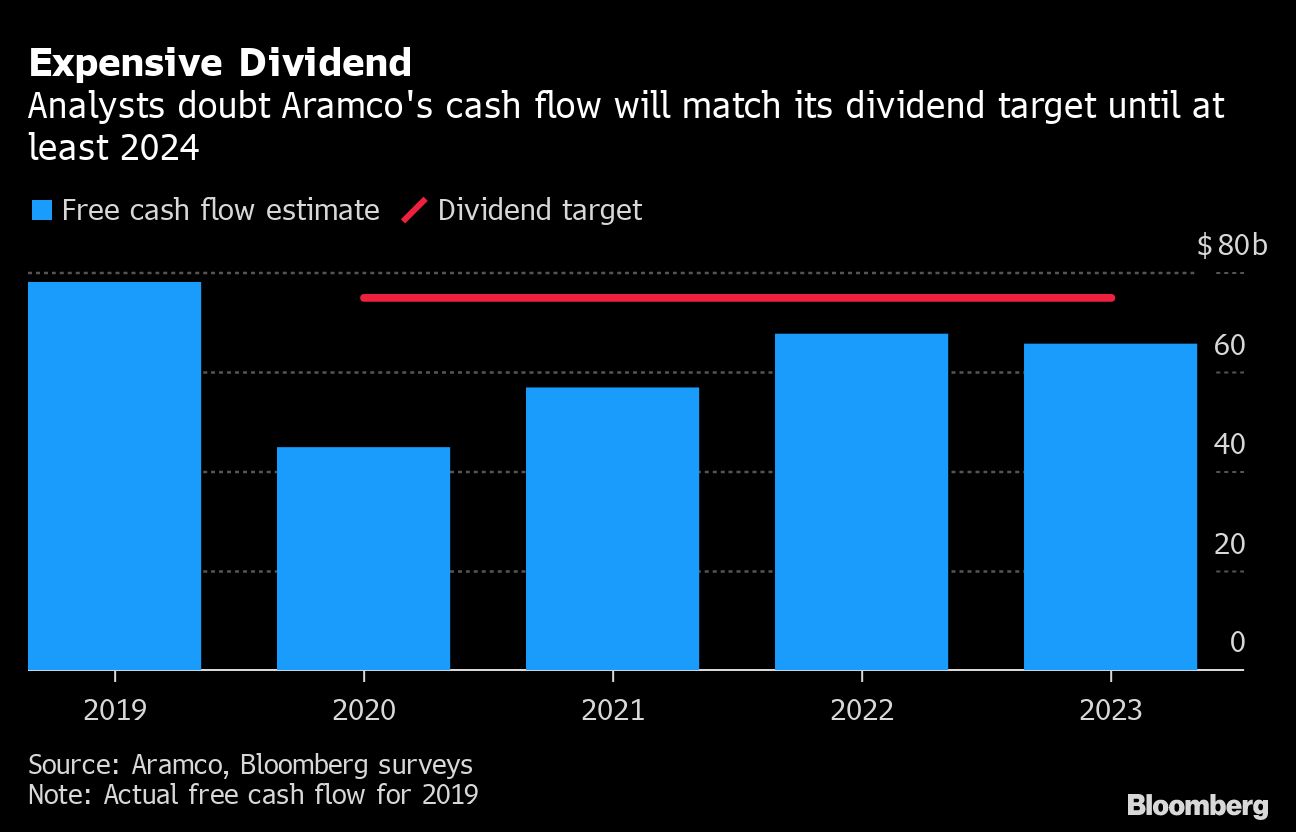 The dividends – and a $69 billion acquisition of chemicals maker Sabic from the Saudi sovereign wealth fund – have bloated the company’s debt levels, though they are still below those of most Big Oil firms. The gearing ratio climbed from -5% at the end of March, meaning Aramco had more cash than debt, to 20% in June, above its targeted range of 5% to 15%.

Gearing could reach 30% by 2023 if crude prices remain below $60 a barrel and Aramco doesn’t reduce the dividend, according to David Havens, head of energy equity research at SMBC Nikko Securities America.

The market doubts oil will rise to that level anytime soon. Brent crude will average just $47.50 next year and $53 in 2022, according to the median forecast of analysts surveyed by Bloomberg.

Aramco “has the lowest upstream costs of any major energy company,” a spokesperson said in a statement. “This provides a level of flexibility in our capital spending plans during this downturn, supporting our ability to maintain dividends.”

The Saudi government’s Center for International Communication, which fields inquiries from foreign media, did not respond to requests for comment.

Executives have shelved several major projects in recent months, including a $20 billion Red Sea facility to turn crude into chemicals and a liquefied natural gas export terminal in Texas. A $10 billion refinery in China has also been put on hold, Bloomberg reported, though Aramco said it’s still committed to investing in the world’s second-largest economy.

Aramco had hatched these plans to gain additional outlets for its crude and weather the global energy transition to cleaner fuels such as gas.

The company probably made the right call curbing investment in costly downstream projects that are unlikely to yield profits comparable to its main business of pumping oil, said Allen Good, an analyst at Morningstar Inc.

Aramco’s come through the oil crisis better than its peers so far. Its second-quarter profit of $6.6 billion may have been down 73% from a year earlier, but it was easily the highest of any energy firm. BP lost $6.7 billion and Exxon Mobil Corp. $1.1 billion.

The Saudi company’s share price has gained 1% in Riyadh this year, in large part because of the dividend pledge. Shell’s has slumped 53% and BP’s 43%.

The crown prince’s desire to get money out of Aramco may only increase, however. Since Chairman Yasir Al-Rumayyan said earlier this year he wanted to sell some assets, the economy has worsened. The government has been forced to raise taxes and reduce public workers’ allowances.

Aramco is already looking at selling a stake in its oil pipelines to raise around $10 billion, Bloomberg reported in April.

Prince Mohammed and the government “really need Aramco to help the kingdom overcome Covid-19 and transition to a post-oil era,” said Neil Quilliam, head of Azure Strategy, an advisory firm focused on the Middle East. “In the process, they will likely damage the country’s most profitable company.”

–With assistance from Anthony Di Paola.