Warnings from United States Federal Reserve officials about the shakiness of the economic recovery from the coronavirus pandemic and a tumble on Wall Street pulled shares in Asia sharply lower on Thursday.

US Federal Reserve Vice Chair Richard Clarida said on Wednesday that the US economy remains in a “deep hole” of joblessness and weak demand, and called for more fiscal stimulus from the government, noting that policymakers “are not even going to begin thinking” about raising interest rates until the inflation rate hits 2 percent.

Cleveland Federal Reserve Bank President Loretta Mester echoed Clarida, saying that the US remains in a “deep hole, regardless of the comeback we’ve seen”.

MSCI’s broadest index of Asia-Pacific shares outside Japan tumbled 1.35 percent in the morning session on broad losses across the region. It is down about 3 percent from a more-than-two-year high reached late last month, but remains more than 41 percent higher than its levels in March as the virus took hold globally resulting in widespread economic shutdowns.

‘Blood on the street’

Many analysts believe the rebound in share prices over the last six months is not fully justified by the underlying realities of the global economy.

“Have we overpriced the rebound in the economy? After the stern warning from Clarida, I say we have,” said Stephen Innes, chief global markets strategist at AxiCorp.

“I think the market was interpreting a bounce from the bottom as a cyclical recovery, but I don’t think we’re there yet. I still think there’s a lot of blood on the street, especially on Main Street.”

US stocks fell on Wednesday after data showed business activity slowed in September, with gains at factories more than offset by a retreat at services industries.

Investors now await weekly data due later on Thursday, which is expected to show US jobless claims fell slightly but remained elevated, indicating the world’s largest economy is far from recovering.

While Clarida and other Fed officials have called for more fiscal assistance in boosting the economy, analysts say immediate support is unlikely with the US Congress locked in an impasse.

Additionally, a second wave of coronavirus infections in Europe threatened the economic recovery in that region pushing equities lower and propping up the safe-haven dollar.

In the currency market, the dollar eased from two-month highs touched on Wednesday. The US dollar index, which measures the greenback against a basket of peers, was a touch lower at 94.348, but edged up against the yen to 105.41.

“A stronger USD remains a significant headwind for commodity markets, with investor appetite waning,” ANZ analysts said in a note.

Spot gold – the price of the metal for immediate delivery – hit a two-month low early in the Asian day as the dollar appreciated, but was flat at $1,863.61 per ounce by mid-morning.

Oil prices fell amid uncertainty about demand due to pandemic-related travel restrictions. 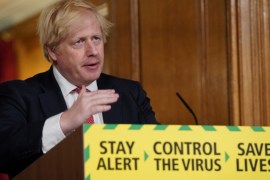 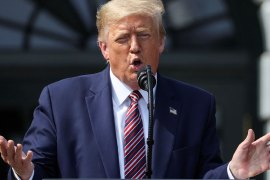 Analysis: Trump’s push to reopen the US economy backfires

Behind Biden in public opinion polls, Trump is in a ‘precarious’ political position as 2020 re-election campaign begins. 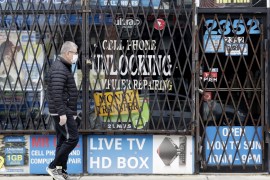 US economy has worst-ever quarter with epic 32.9% dive in Q2 GDP

Annualised quarterly plunge was driven by coronavirus lockdowns that ground US economic activity to a halt. 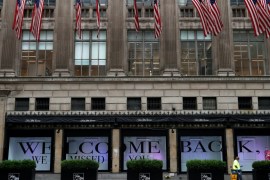 The US economy shrank slightly less than first thought in Q2

Revised figures show the US economy shrank 31.7% annualised in Q2 – alarming but less than the 32.9% initial estimate.