By Christopher Jasper and Fabian GraberBloomberg

Billionaire Richard Branson cleared a crucial obstacle on the tortuous journey to rescue his flagship airline, hobbled by the coronavirus pandemic.

Virgin Atlantic Airways Ltd., founded and controlled by the serial entrepreneur, won creditor backing for a 1.2 billion-pound ($1.6 billion) bailout on Tuesday, paving the way for final approval at a court hearing next week.

“Achieving this milestone puts Virgin Atlantic in a position to rebuild its balance sheet, restore customer confidence and welcome passengers back to the skies as soon as they are ready to travel,” the airline said.

Virgin Atlantic was plunged into crisis after the virus grounded flights and the U.K. government denied it aid from a multi-billion-pound bailout fund. The Crawley, England-based carrier embarked on a desperate search for private backers, eventually lining up financing from U.S. hedge fund Davidson Kempner Capital Management, along with a contribution from Branson.

Chief Executive Officer Shai Weiss had warned the airline would run out of cash next month, putting at risk the company’s 6,500 remaining jobs after it already cut more than 3,000 positions.

The U.K. court meeting next Wednesday will be followed by a procedural hearing in the U.S. the next day, Virgin Atlantic said. The company filed for Chapter 15 bankruptcy protection this month to guard against creditor claims while aligning the two legal processes.

“It’s critical that they get this money to survive the crisis,” said John Strickland of London-based airline advisory firm JLS Consulting.

The rescue received the backing of trade suppliers on Tuesday – the last of the four creditor groups to line up behind the plan. Aircraft leasing firms, the providers of a $280 million credit facility, and related-party creditors — including shareholder Delta Air Lines Inc. – had already signaled their approval.

Had the trade-supplier group failed to agree, the U.K. judge at next week’s hearing would have had to decide whether to ignore the concerns of the firms and push the plan through in a so-called cram-down of dissenting creditors.

Earlier this year, Branson’s Virgin Group saw its equity stake in Virgin Australia Holdings Ltd. wiped out when that airline collapsed. Bain Capital agreed to buy the carrier, and Branson may purchase a stake, Bloomberg has reported.

Even now, challenges loom for Virgin Atlantic, which operates a fleet of 40 wide-body planes.

The lucrative long-haul flights it relies on have been among the hardest hit by Covid-19, and demand is likely to be stuck in the doldrums for years. A moratorium on trans-Atlantic travel remains in place for most passengers as the disease continues to claim lives in the U.S. 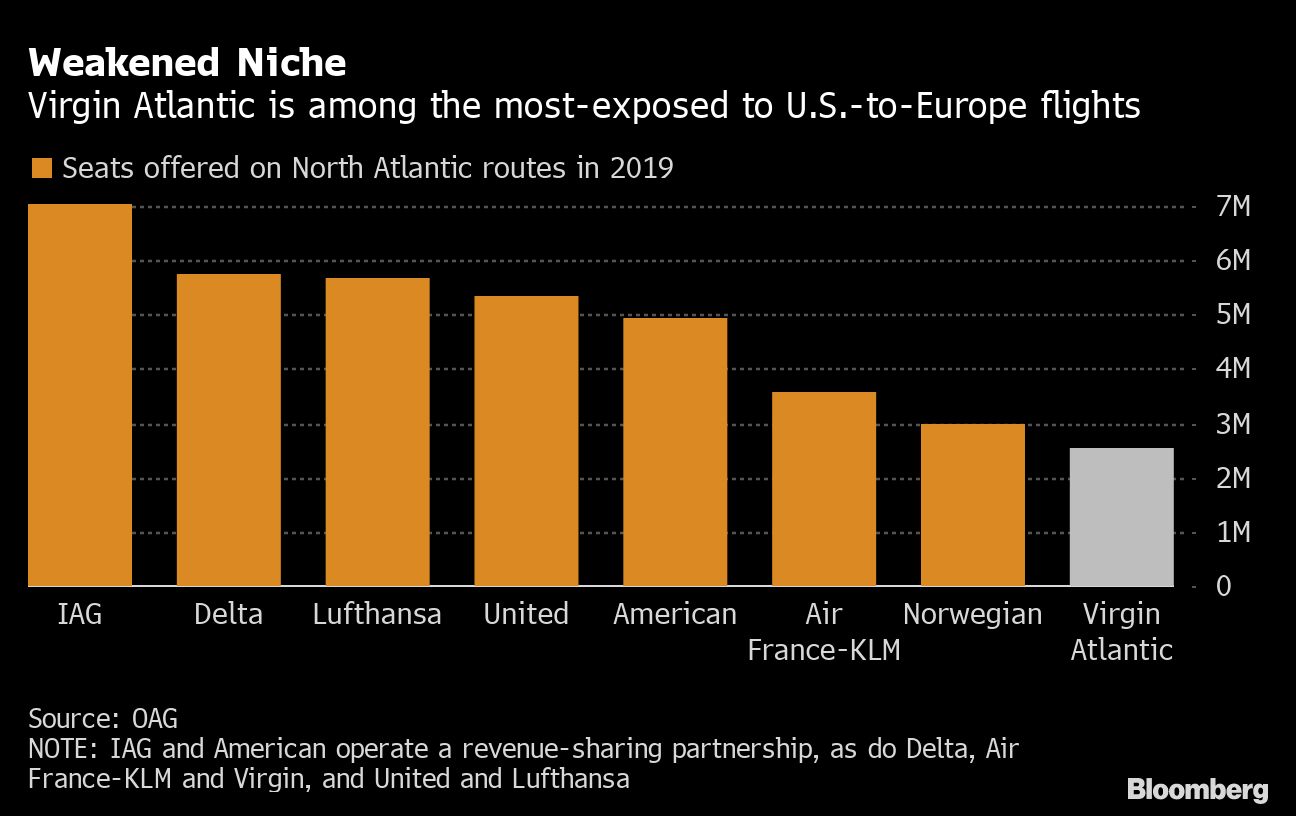 What’s more, further virus flare ups could put many airlines in a battle for survival if the slow winter season is followed by more disruptions next year.

“The challenge now is the weakness of Virgin’s core market,” Strickland said. “It’s important that they guard cash, manage every cost and work to further strengthen their liquidity.”

The airline also faces a tougher-than-ever tussle with arch-rival British Airways, which analysts expect to emerge from the crisis stronger than most competitors.

BA has taken a tough line on jobs, seeking to cut as many as 12,000 posts while renegotiating contracts for the remaining staff. Owner IAG SA has also avoided falling back on the huge state-aid packages that have propped up Deutsche Lufthansa AG and Air France-KLM. While it’s made use of state loan guarantees, it’s relatively free from government interference and less encumbered by borrowing costs.