By Ryan Hesketh and Julian LeeBloomberg

Egypt’s Sumed pipeline was designed to pump 2.5 million barrels of Persian Gulf crude from the Red Sea to the Mediterranean every day. Since May, a slump in oil demand and OPEC+ oil production cuts seem to have combined to slash flows to about a quarter of that.

Acting as an artery in the global oil trade, the Sumed gets Middle Eastern oil to the north African coast, allowing giant supertankers – that would otherwise sit too deep in the water – to continue to use the Suez Canal. From the Mediterranean port of Sidi Kerir, it can then be shipped to refineries across Europe and North America. The slump in flows reflects European fuel consumption that plunged by as much as 90% in some instances and, in response to that, the deepest output reductions in history by the Organization of Petroleum Exporting Countries and allied producers. 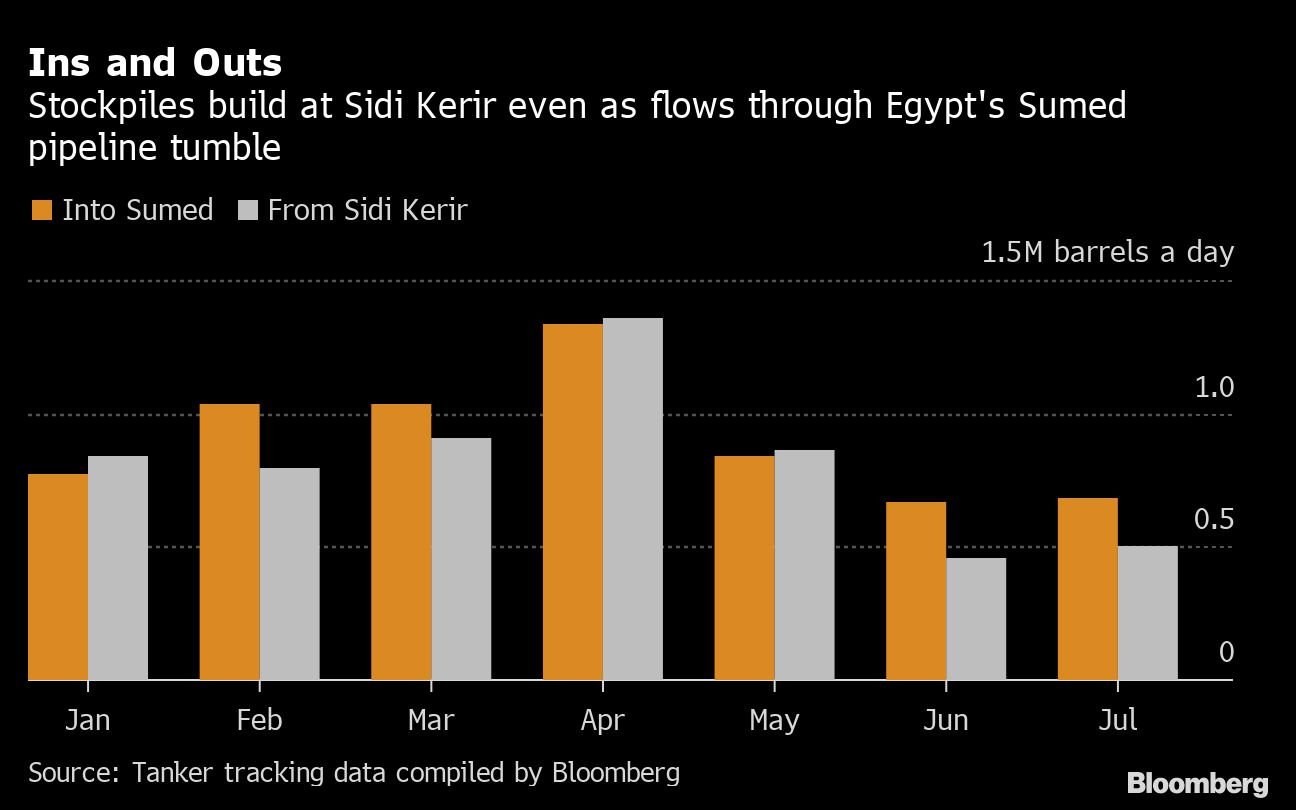 In April, Saudi Arabia embarked on a production surge, pushing output to an all-time high and helping to drive down prices. That’s visible in the flows through the canal.

Then output cuts agreed by OPEC and its allies came into effect in May. Saudi Arabia’s production tumbled and Sumed flows almost certainly followed suit. The amount of crude poured into the Sumed fell to just below 700,000 barrels a day in June and July, down from about 1.3 million in April, according to tanker tracking data compiled by Bloomberg. Meanwhile, the amount leaving Sidi Kerir – the Mediterranean end of the line – increased. That would imply stockpiles there probably swelled.

There is almost 20 million barrels of oil-storage capacity at either end of the Sumed, meaning the movements of tankers at either end of the conduit won’t necessarily correlate perfectly with flows through it. The industry’s biggest tankers sit too deep in the water to navigate the Suez Canal fully loaded. They can either discharge all their cargo at Ain Sukhna and then return to the Persian Gulf for their next consignment, or they can unload part of it at Ain Sukhna and then sail through the waterway before refilling at Sidi Kerir. 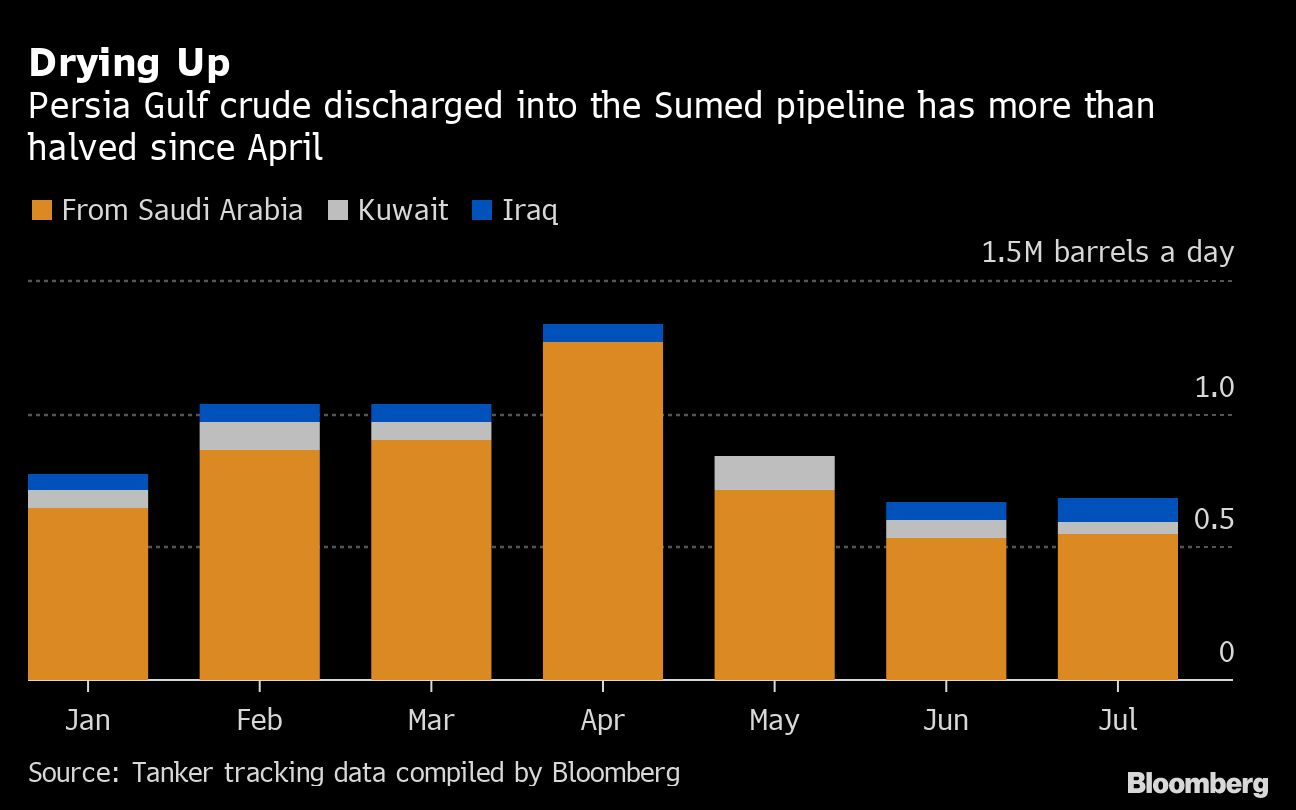 The vast majority of crude entering the pipeline comes from Saudi Arabia, with Kuwait and Iraq contributing much less. As such, it’s the loss of Saudi volumes that caused overall flows to slump. Despite talk of demand recovery, the implied pumping rate has shown no sign of improving in July. 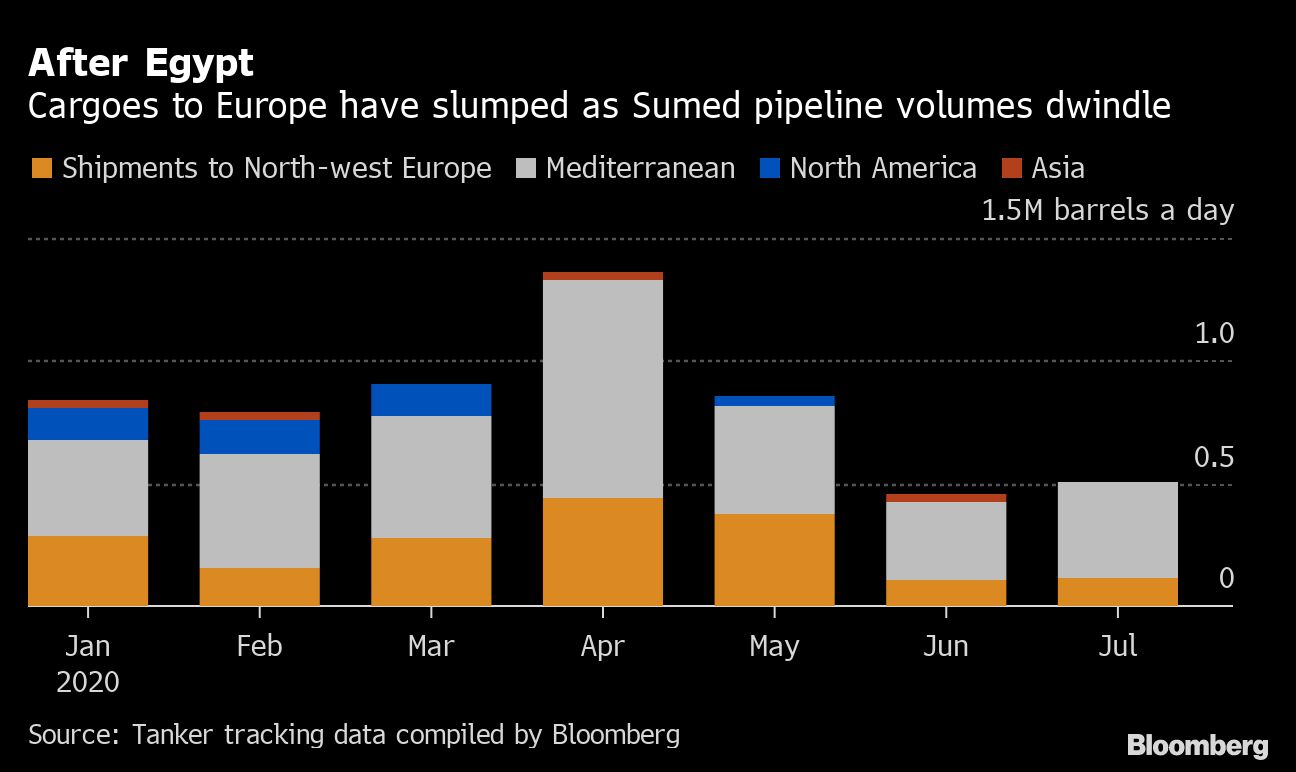 The destruction of European lifting of crude from Sumed was particularly pronounced in June and there has been a slight revival in July. Demand may be helping. Data from the TomTom Traffic Index show congestion remaining well below normal levels in cities in Spain and Italy, key markets for Sumed crude, but a slow pick-up in run rates at the region’s refineries is beginning to draw more crude from the pipeline.

Many of the world’s oil pipelines have seen pumping rates tumble as demand fundamentals stay weak and OPEC+ extended its deepest output cuts through July. With those cuts set to be eased slightly in August, production is set to rise by as much as 2 million barrels a day. But with most of the increase to be consumed locally, the Sumed may have to wait a while before it feels the benefit.