But there was cautious optimism among analysts – and the government – as talks to restructure $66bn in foreign debt appeared to be making headway. If the new deal happens, it could stave off a more dramatic financial unravelling.

The country officially extended the Friday deadline for its external debt offer to June 2 “in order to continue constructive discussions”, Economy Minister Martin Guzman said in a statement.

“The negotiations continue on a course that we consider positive, with increasing mutual understanding,” said Guzman on Friday, noting that while there remains “an important distance to cover”, all sides are still at the table. “For Argentina, it is of the essence that the deal is aligned with the payment capacity of the country.”

The initial offer called for a three-year grace period on payments, a 62 percent reduction in interest payments and a 5.4 percent cut to the principal. It was rejected by key groups of bondholders, who have presented counterproposals. Reuters reported that Argentina intends to amend its offer in the coming days.

Guzman’s statement also addressed $500m in bond interest payments that had been due on April 22. The 30-day grace period expires at 5pm EST (21:00 GMT) on Friday, after which the country would technically enter into default for the ninth time in its history, according to economists. Reuters reported that Argentina’s ambassador to the United States sent a letter confirming the country would postpone making the bond payments due Friday.

Guzman said the outstanding payment is “also part of these discussions, and we expect it to be addressed in the broader agreement that we are pursuing”.

Argentina’s failure to pay the interest “will result in defaults across the various bond issuances,” the Ad Hoc Bondholder Group, which includes major asset managers including BlackRock Financial Management, Fidelity Management & Research and AllianceBernstein, said in a statement. However, “the Group understands that Argentina has expressed an intention to engage with creditors over the next week to try to find a comprehensive solution,” the statement said.

Another important creditor committee said failing to remedy the default would “prevent access to the international capital markets needed for the recovery of the Argentine economy and therefore will be detrimental to the Argentine people.”

The novel coronavirus and the economic shutdowns it begot have raised the stakes in Argentina’s already high-stakes duel with bondholders. A virus-induced lockdown worsened Argentina’s grim economic picture, which includes 46 percent inflation, a rapidly devaluing currency and a drawn-out recession.

For Minister Guzman, the goal is to snap Argentina out of the vicious boom-and-bust cycles that have devastated ordinary citizens, and damaged the country’s relationships with investors. Part of the problem has been high coupon rates that are meant to compensate investors for greater risk but also turn Argentina into a riskier bet, Guzman explained during a discussion at the Council on Foreign Relations last week. “We want to build on realism,” he said. 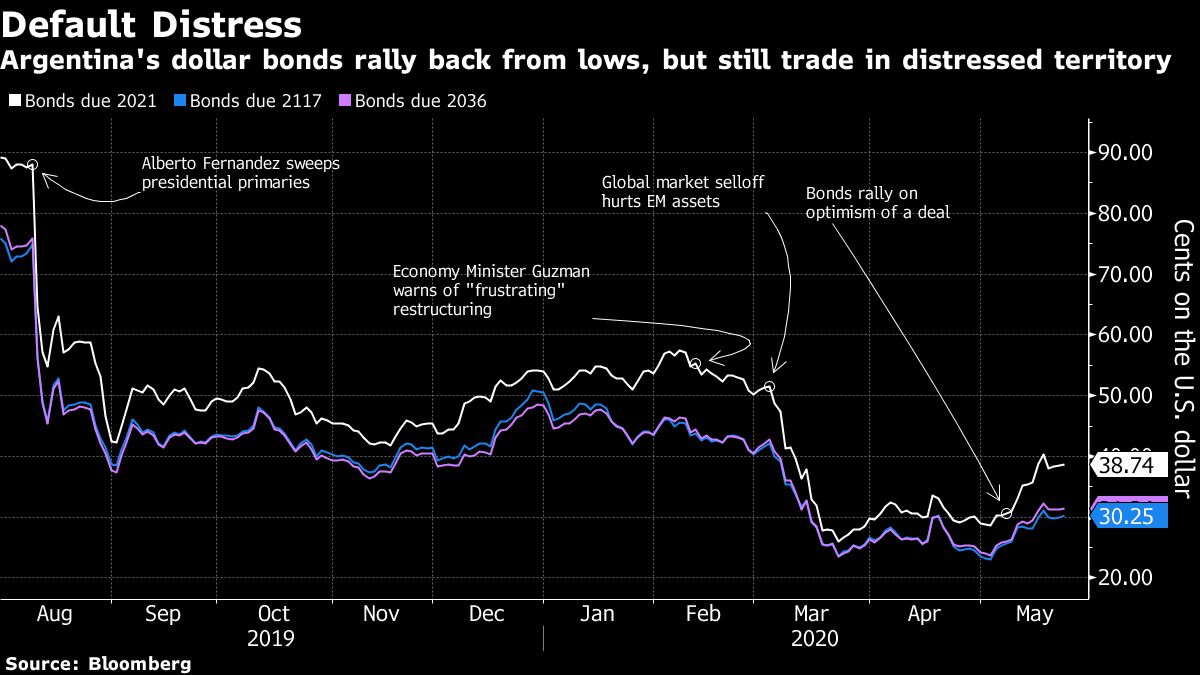 Both sides closer to a deal

Gabriel Rubinstein, a former governor of the Argentine Central Bank and head of the Buenos Aires firm Gabriel Rubinstein & Associates, described Friday’s missed payment as a “selective default”, and one that could be remedied if a new deal is struck.

“Argentina did not pay an obligation that was due today, but it didn’t say it wasn’t going to pay the rest of its debt,” he said.

What happens next is, to a large extent, up to bondholders. Those who did not get paid on Friday can launch legal action. And if 25 percent of them get together, they could declare the entire debt, not just the interest payments, in default. Such a move would trigger a devastating chain reaction.

“As of today, the default is no longer decided by Argentina; it’s decided by the bondholders,” said Rubinstein. “But since we’re very close to a possible deal, no one thinks anyone is going to start to make legal moves, with lawyers, when things could be resolved in 10 or 15 days.”

“I think Argentina is just now showing a willingness to negotiate, which it wasn’t showing earlier,” he added. “It’s much more likely that we will have a deal, but it’s not definitive.”

Lucia Pezzarini, an economist with the Buenos Aires firm Ecolatina, said Friday’s missed payment is not similar to what happened in 2001, when the country defaulted on $95bn in bonds and spiralled into years of economic and political chaos.

But, it’s not harmless either, Pezzarini says, “because there are always repercussions with going into default”.

“For me, the relevant news of the day is that Guzman said he was going to present another offer in the next few days,” she said.

Mark Weisbrot, co-director of the Center for Economic & Policy Research in Washington, DC in the US, said the Argentine negotiations have already produced important changes – in particular, a shift in the position of the International Monetary Fund (IMF), which he said had pushed in the past for some of the policies that damaged Argentina. It now acknowledges that the country can’t afford its debt.

“There is now a recognition that it’s a mistake for all parties, and for the world, to try and force a government to maintain payments that aren’t sustainable,” Weisbrot said. “They could still end with an unsustainable solution, but this is progress – at least in how the negotiation is being interpreted by very influential actors like the IMF, and also the media.”