By Britt Clennett and Marco Jakubec

Taking advantage of the warmer weather on a late autumn day last year, the Sahin family packed their car and travelled about an hour out of Istanbul to spend some time at the beach.

“My father used to bring us here as kids and now I bring mine,” 42-year-old Ayse Sahin told Al Jazeera. “Back then it was basically pristine but now there is rubbish around where my kids are playing.”

“It’s a nice break from city life for us, but I wish there weren’t areas where you could see a build-up of plastic on the beach. It’s almost kind of normal to us now.”

It is not just regular beachgoers like the Sahin family who have noticed the proliferation of plastic waste on Turkey’s shores. In many places, the country’s coast is inundated with waste from its own waterways, as well as rubbish flowing in from its neighbours in the Mediterranean.

Turkey is the second-largest manufacturer of plastic in Europe after Germany. Every year it throws out millions of tonnes of plastic and its waste collection system can only deal with a fraction of it. The rest is either burned, buried or dumped.

And yet, as of 2018, Turkey imported a staggering 226,449 tonnes of plastic waste from abroad, according to data compiled by UN Comtrade, making it one of the top 10 importers of plastic discarded by foreigners.

In December the Turkish government announced a restriction on garbage imports to limit the volume of waste entering the country. Under the new laws, companies must also cut their waste imports by 20 percent.

But Sedat Gundogdu, an academic at the Cukurova University Faculty of Fisheries, believes those new measures could be undone by the coronavirus pandemic, which has breathed new life into the plastic industry. For instance, supermarket produce is now being individually wrapped to meet heightened hygiene standards to stem the spread of COVID-19.

“It will cause us to face even more serious plastic pollution in the coming years,” Gundogdu told Al Jazeera.

Gundogdu describes the Mediterranean, the world’s largest enclosed sea, as “plastic soup” and for good reason.

About 247 billion pieces of plastic are floating in the Mediterranean Sea and every minute the equivalent of 33,800 plastic bottles are added to the mix, according to a 2019 report by the World Wildlife Fund (WWF).

The situation is fast approaching a tipping point.

Turkey’s southern coasts are the most polluted in the Mediterranean, the WWF found, with currents depositing 30 kilogrammes of plastic for every kilometre of coast daily.

Turkey is also responsible for about a fifth of all plastic leaked into the Mediterranean, said the WWF.

Wildlife is already paying a heavy toll, which has ramifications for human health as well. Almost half of the fish in Turkey have been found to contain microplastics.

“The wildlife is suffering under the pressure of human behaviour,” said Gundogdu. “Such a high amount of plastics makes coastal environments inhospitable to both humans and wildlife.”

The health of the economy is also on the line. Marine waste plastic is estimated to cost the Turkish economy around $93m each year, said the WWF, with the tourism sector hit the hardest.

In an emailed statement to Al Jazeera, the ministry said that some of the claims “in the [The WWF] report regarding Turkey are not correct” and called into question the data and methodology used to draw conclusions.

“It’s essential to use the correct data to reach an accurate result,” said the ministry. 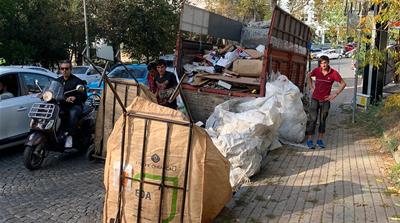 Waste not, want not

Turkey has vowed to drastically improve recycling through its zero-waste project, an initiative led by First Lady Emine Erdogan, with an ambitious goal of making the country waste-free by 2023.

“Turkey attaches great importance to waste management,” the Environment and Urbanisation Ministry told Al Jazeera. “[The Zero Waste Project] basically increases the efforts to evaluate the waste as a resource and to raise public awareness regarding environment”.

It aims to do this, said the ministry, within the framework of a “circular economy”, a system focused not only on waste management, but of reusing, recycling and responsible manufacturing.

“The system has been launched in nearly 30,000 institutional buildings, while training has been provided to 2,500,000 people, mainly public institutions, municipalities, universities, schools and hospitals.”

In recent years, Turkey has upgraded its waste treatment infrastructure, doubling the number of recycling facilities and creating jobs in the process.

According to the OECD, Turkey is making the right moves to bring its environmental policies in line with European Union standards. But the country falls short on implementing them properly.

Some 90 percent of municipal waste is still sent to landfills and only a fraction is recovered, said the OECD.

“The critical problem starts in separation of waste at the source, in which Turkey’s waste management systems are extremely insufficient,” said Greenpeace Mediterranean Lawyer and Programme Director, Deniz Bayram.

Bayram welcomes recent moves under the zero-waste policy, but told Al Jazeera “there must also be action to confirm this political intention”.

Sedat Durel, a representative of Turkey’s Chamber of Environmental Engineers, said the zero-waste initiative is more of a guideline for the private sector than concrete policy.

“We don’t have any reports about what they’ve done until now,” Durel told Al Jazeera. “It seems these are not critical changes to our waste production and recycling systems.”

One problem, said Dural, is the paucity of baseline data to inform effective policies.

“The last time waste characteristics were recorded in Istanbul was in 2009,” he said. “So scientifically it’s not possible to know if we are doing enough because we don’t know whether the waste is plastic, glass or organic. The government said it has a plan but how can you have a plan if you don’t know?”

Environmentalists also say that it is difficult to get access to government data and confirm its veracity.

“The burning problem is accessibility to the data,” said Bayram. “The recycling data is not fully transparent and verified with trustworthy sources. When we applied to the Ministry of Environment through access to information, we were not provided information on both recycling and waste management.”

Adding to the mix

For years, much of the world’s scrap plastic was destined for Chinese ports. Then Beijing introduced a ban on plastic waste imports in early 2018 – a decision that rippled throughout the world.

With China no longer willing to take in plastic waste created abroad, Turkey emerged as one of the main countries to pick up the slack.

“Imports of plastic waste are not acceptable on any grounds. It is pointless for a country that has not yet been able to deal with its own waste,” said Gundogdu.