Gold headed for the biggest weekly gain since July and copper rose as Joe Biden tightened his grip on the race for the White House, while investors also weighed prospects for further Federal Reserve stimulus.

Bullion broke out of a narrow trading range seen over the past month as uncertainty over the election and renewed stimulus hopes boosted demand for the haven. Biden, who needs a win in one more state to be elected president, overtook Donald Trump in Georgia and also expanded his lead in Nevada.

Trump meanwhile said the election was being stolen from him, though presented no evidence of widespread voting irregularities. The president’s campaign peppered courts with legal complaints, aimed at slowing or pausing counting of the votes, which were generally unsuccessful. 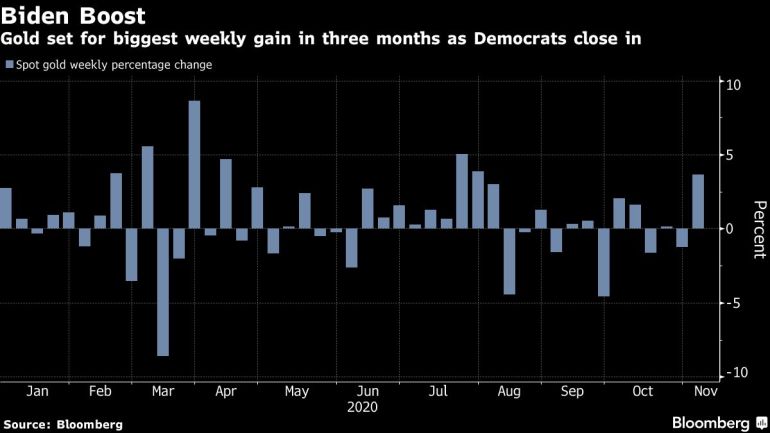 The market is looking for an increased likelihood of a Biden victory, and a stimulus package albeit rather a modest one, compared to a blue wave scenario, might be still in the horizon, according to Wenyu Yao, senior commodities strategist at ING Bank. With the Fed to stand behind the curve, given its new average-inflation targeting framework, this is leading to low or lower real rates. Investors would still like to add gold into the portfolios, she said.

Fed Chair Jerome Powell opened the door to a possible shift in the central bank’s bond purchases in the coming months, saying that more fiscal and monetary support is needed. The Fed kept its stimulus steady at its meeting this week, but a Republican Senate hamstringing government aid efforts may force it to step up and fill the gap soon.

The U.S. unemployment rate fell more than expected in October, dropping to 6.9%, according to a Labor Department report Friday.

In base metals, copper turned higher, and was last up 1.4% at $6,946.50 a ton in London. It’s also heading for a weekly advance on the back of recent dollar weakness. Zinc reversed an earlier loss to reach the highest since May 2019.

While a contested election ending with a divided government would be the least bullish of all possible outcomes for commodities markets, copper could still hit fresh highs next year on the back of faltering supply and robust demand, Morgan Stanley analysts Susan Bates and Marius van Straaten said in a note.

“Once initial volatility has passed, we expect increased focus on the market fundamentals, which remain broadly supportive for base metals,” the analysts wrote. “Copper still features the strongest fundamentals on a tepid supply growth outlook through 2021.”