Cash-strapped Oman plans to take a step unheard of in the Persian Gulf region: It’s going to start taxing the income of wealthy individuals beginning in 2022, as part of a broader program to tackle a budget deficit that’s ballooned due to low oil prices and the coronavirus pandemic.

By reducing government spending while spurring investments, the plan is projected to bring the budget deficit – estimated to reach nearly 19% of gross domestic product in 2020 by the International Monetary Fund – to 1.7% by 2024, the Ministry of Finance said in an emailed statement on Sunday. Revenue from the income tax will be used to fund social programs, it said.

Oman needed urgent action and the plan is a start. Some of the goals are ambitious to the point of unrealism such as the narrowing of the budget deficit to 1.7% of GDP in 2024 from 15.8% this year. Others could disrupt the political economy of rentierism such as the possible introduction of income taxes, although it’s not clear if this will apply only to expatriates or to citizens as well

The tax would apply to high-income individuals, but the plan – whose implementation is still currently being studied – doesn’t specify income brackets.

Affluent governments in Arab Gulf economies have long steered clear of imposing taxes of any kind, both because the region’s tax-free status has been used to attract labor and companies, and because officials feared a possible backlash from citizens who have no say in how the state spends. 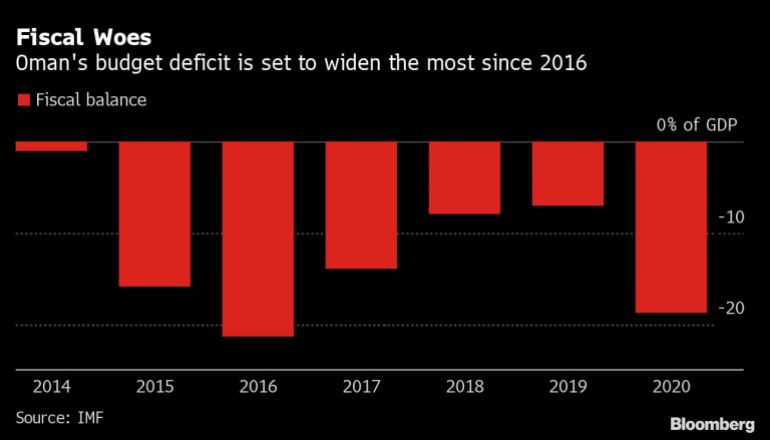 But the oil crash in 2014 forced them to change their thinking. Oman, Saudi Arabia and the United Arab Emirates have all introduced value-added taxes, and began re-evaluating generous state-supported benefits. The impact of the coronavirus has only deepened the need to beef up government coffers.

Oman’s implementation of the tax will be closely watched by governments across the Gulf. All of the region’s monarchies will be forced to impose “some kind of income taxes eventually” because they are unable to make the current financial model work permanently, said David B. Roberts, an assistant professor at King’s College London who studies the Gulf.

“No polity on earth likes more taxes and the sultan’s majlis and inbox will be full of complaints,” Roberts said. “But if the process is undertaken in a sensible way, with focus on top earners, it might even have wider support.”

Oman’s government is also planning to gradually pare the state’s subsidies on electricity and water until completely removing them by 2025, as well as expanding visa-fee exemption to more countries in a bid to spur tourism.

Often deemed the weakest link in the region, Oman’s debt surged to 60% of GDP last year. In October, the sultanate sold $1.25 billion in seven-year securities, and $750 million in notes maturing in 2032, and said it was in talks to win support from some states in the region, according to its bond prospectus.

“Reducing the fiscal deficit so sharply by 2024 looks ambitious, given the impact of fiscal consolidation on the economy and social aspects,” said Monica Malik, chief economist at Abu Dhabi Commercial Bank. “Any signs of sustained progress with the reform program will be very positive.”