Saudi Arabia’s economy contracted for a fifth straight quarter but the slump eased, according to estimates released on Tuesday by the General Authority for Statistics.

Gross domestic product shrank 4.2% during the third quarter, still battered by oil market turmoil and the coronavirus pandemic, but less so than in the second quarter, when output contracted 7%.

“The flash estimate shows the economy rebounding in 3Q after a sharp contraction in the previous quarter. A breakdown by sector is absent, but the data are consistent with the non-oil economy operating at around 3% below the pre-virus peak — half the size of the 2Q gap. The remainder of the hole will be harder to close.” 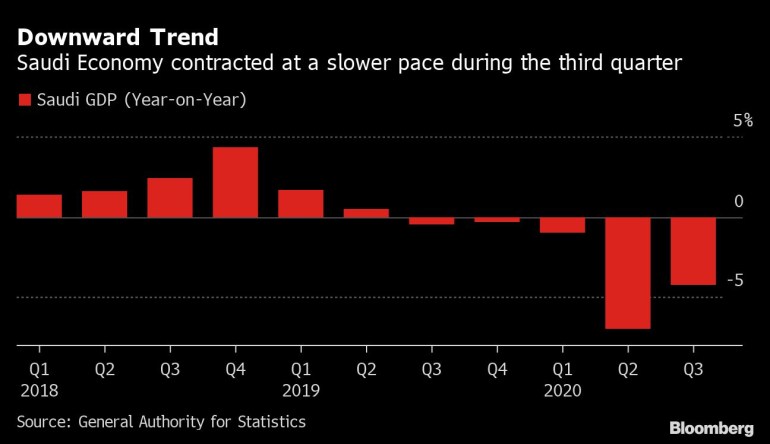 The International Monetary Fund expects the Saudi economy to shrink 5.4% this year, among the mildest drops in the Gulf region. The budget shortfall is anticipated to widen the most since 2016 to about 12% of GDP, according to the Ministry of Finance.

This is the first time Saudi Arabia has published growth estimates so quickly, as part of an effort “to provide more timely information on the Saudi economy to decision makers,” the authority said.

The kingdom’s outlook on Monday was revised to negative by Fitch Ratings — a decision that could lead to the lowest downgrade since the rating agency first assessed Saudi Arabia in 2004.