Jesse Culwell does not plan on voting come November. It is not that the 25-year-old does not care about politics in the United States: “I’m actually a very political person,” Culwell said. But he worries that participating in an election cycle he finds “disheartening” may have a detrimental effect on his mental health.

“I think it is healthy for a citizen to care about how their country is run and setting up the future for their children and grandchildren, [but] seeing how people are choosing their candidate, or party, is very disheartening,” he told Al Jazeera. “I just don’t value this election as a priority in my life.”

Culwell has struggled with depression for a while, he said, and when the coronavirus pandemic hit, his mental health challenges only grew worse.

“I would go days without eating, I would lay in bed all day,” he added. “I never thought once to get up, for 16-plus hours. I was trapped in my mind and I wanted to die, I pushed people I loved out [of] my life.” So when the election began to roll around, “I just really couldn’t care,” he explained.

Culwell has since focused his attention on overcoming his mental health challenges by returning to his love of writing, exercising and finding other hobbies. But he also recognises that his depression may stem “from always putting other things and people above” himself and “politics are no different”.

Culwell is one of more than 16 million people in the United States whom the Centers for Disease Control and Prevention (CDC) says experiences depression each year. But that number does not account for the increased number of people experiencing depression as a result of the coronavirus pandemic and its effects.

I just don’t value this election as a priority in my life.

Jesse Culwell, does not plan to vote in November

A CDC study published in August found that the percentage (24.3 percent) of American adults experiencing depression in the last week of June was nearly four times the percentage (6.5 percent) during the same timeframe the previous year. The rates of anxiety tripled, the study also found. Those increases have experts worried about what the state of the country’s mental health will mean for November’s election.

Research shows that individuals experiencing signs of depression – including feeling hopeless, sad, emptiness, low energy, trouble concentrating, or thinking about self-harm – are less likely to vote and participate in the political process.

“We find that feelings of depression are one of the strongest predictors of abstention,” said Christopher Ojeda, an assistant professor of political science at the University of Tennessee who has extensively studied the link between depression and political participation.

One reason for this is that voting is a physical activity that requires energy that someone experiencing depression may not have.

Jesse Mann, who has suffered from depression and has a bipolar disorder, says he can understand this feeling. During his worst depression, he said: “It was totally impossible to do the very basic things in life.”

“It can be painful and totally exhausting just to go to the grocery store,” Mann, a 40-year-old podcaster and filmmaker, told Al Jazeera.

In addition to the physical aspect of voting, Ojeda said, individuals experiencing depression may also lack the motivation to participate in not just the act of voting, but also the political process as a whole. That includes one’s interest in politics, as well as a negative effect on a person’s internal efficacy – the belief that one understands enough about politics that he/she is therefore capable of participating.

It is not surprising that such feelings have been heightened due to the coronavirus, which has infected more than 7.5 million people and killed more than 211,000 in the US alone.

Many people have been stuck at home for months and there is growing concern about the pace of the US’s economic recovery.

While the unemployment rate fell to 7.9 percent last month, the economy added 661,000 jobs, fewer than expected. Some 840,000 people filed for first-time unemployment benefits last week, according to the Labor Department. Such elevated numbers have left many to worry about how to just get by.

I am deeply concerned that household-level financial distress will decrease turnout, in addition to low turnout caused by the health crisis

“I am deeply concerned that household-level financial distress will decrease turnout, in addition to low turnout caused by the health crisis,” said W Ben McCartney, an assistant professor of finance at Purdue University, who studied the effect of housing prices on voter participation.

While McCartney’s study did not account for feelings of depression, he found that financially distressed households are causally less likely to vote.

“Voting is a costly activity and, when households’ financial situations have deteriorated, they cut back on everything optional,” he said.

Citing high rates of depression, Ojeda also suspects voter turnout will be lower in November, although he cautions that research undertaken before the pandemic may not prove useful during this unprecedented election.

Still, psychologists and therapists across the country say there are signs their clients’ motivations, at least anecdotally, are aligned with past research.

Dr Karen Cassiday, a Chicago-based psychologist and former president of the Anxiety and Depression Association of America, said many of her clients are saying: “Why bother? What’s the point in voting? Things are so screwed up. Our system is so broken.”

On the other hand, Cassiday has also seen an increased number of clients with heightened anxiety surrounding the pandemic and/or the election.

Unlike depression, research shows that anxiety is not necessarily a factor in determining voter turnout, but there are some studies that suggest anxiety may motivate people to get involved in “low-cost forms of political participation”, according to Ojeda. “It could be something like wearing campaign gear, like a button or displaying a yard sign.”

Cassiday says her clients who experience anxiety are often “more likely to donate money to a campaign or have already ordered and sent in their mail-in ballot because they want to make sure it gets there and they’re scared of getting sick”.

Dr Steven Stonsy, a therapist and founder of CompassionPower, said he has also seen a sharp increase in requests for counselling in recent months. He coined the phrase “election stress disorder” in 2016, and he said since then, things have only got worse.

“Stress disorder immediately morphed into headline stress disorder,” he told Al Jazeera. “So the baseline anxiety level was elevated before this election cycle began,” he added.

“This election has more animosity, directed not only to political opponents but to those who would vote for them,” Stonsy said, explaining that people tend to blame the people closest to them.

Worse still, many people experience anxiety and depression simultaneously. This reality has led experts and others to worry that people living with a mental health issue – should they not vote – will not see their needs prioritised by the politicians who take office.

“So much of our mental state, right now in this country is affected by politics,” said Mann, the podcaster who has experienced depression.

“At the same time, that very illness prevents us from getting them out of office,” he added, referring to politicians – in his view, Republicans – who do not value funding “what little support there is for people who are disabled by depression and mental illness”. It is a bit of catch-22, he said.

That is where mental health groups are hoping to step in. Mental Health for US was founded in 2019, with the “ultimate goal of elevating mental health and addiction during the 2020 election cycle”, said Casey Dillon, the bipartisan organisation’s managing director.

Mental Health for US has a coalition of foundations and nonprofit organisations that encourage politicians to ensure mental health is a part of their policy platforms, as well as provide information to voters about where each candidate stands on mental health and addiction and how to vote.

“Voting with mental health in mind is really important because mental health isn’t just about healthcare, it’s about everything,” she said, pointing to education, poverty, and the economy. “So paying attention and having policymakers also understand that mental health is part of these things is important.”

For those experiencing depression and/or anxiety, therapists and other experts say they first tell people their vote does matter. They also recommend disconnecting from the things that make them particularly anxious or overwhelmed, like social media, and finding support from peer groups and others around them.

For Culwell, he plans to continue focusing his energy on the things that contribute to his mental wellbeing, even if that means not voting in November.

“If I truly want to help others or make decisions to better this country, then I need to be the best version of myself,” he said. “So, I really don’t care about this election, what’s going to happen will happen. The only thing I can do is make sure I’m in a better state for the next election.”

If you or someone you know may be at risk for suicide, call the National Suicide Prevention Lifeline at 1-800-273-8255 or text HOME to 741741 to reach the Crisis Text Line. If you are in the US and it is an emergency, call 911, or seek care from a local hospital. 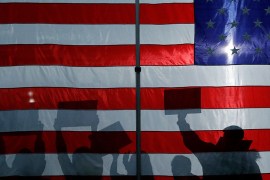 The US state is set to kick off the caucus and primary season of the 2020 presidential race. 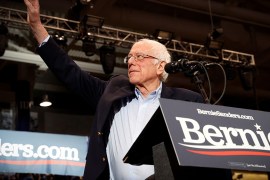 Democratic Party looks to recover after chaotic Iowa caucuses as voters cast ballots in US state of New Hampshire. 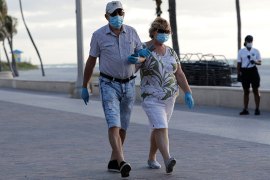 In key US state of Florida, Trump stumbles among senior voters

Trump has virtually no path to victory without winning Florida, and older voters – which he is losing – are critical. 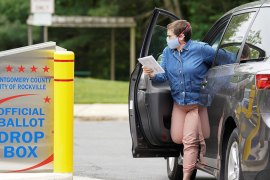 Joe Biden needs to win 89 percent of all delegates at stake on Tuesday to formally clinch the Democratic nomination.