The United States on Thursday imposed new sanctions that effectively shut Iran out of the global financial system – a move that is raising serious concerns about the human toll it could take on the Iranian people as they struggle with an already crippled economy and the worst COVID-19 crisis in the Middle East.

On Thursday, the US Treasury blacklisted 18 Iranian banks, effectively severing Iran’s financial sector from the rest of the global economy by exposing foreign banks, firms, and individuals that do business with them to possible punitive measures by Washington.

In a statement detailing Thursday’s financial sector blacklistings,  the US Treasury repeated its claim that Iran funds “malign” activities, and said sanctions “will continue until Iran stops its support of terrorist activities and ends its nuclear programs”.

Despite calls from United Nations officials and other global leaders to suspend sanctions while Iran is battling the coronavirus pandemic, Washington has not relented in its “maximum pressure” campaign against Tehran as the November 3 US election draws near.

While the Trump administration insists that sanctions do not interfere with the flow of humanitarian goods, critics both in Iran and outside of it are pushing back on Washington’s narrative, saying the new sanctions will further hobble Iran’s ability to purchase vital food and medicines.

All countries see these US moves are completely against international rules

“The U.S. government recognizes and understands the necessity for both commercial humanitarian exports and humanitarian transactions to access Iran’s banking system, and this action does not interfere with that ability,” said the US Treasury on Thursday.

But Iranian officials are blasting that claim.

In a statement released on Friday, President Hassan Rouhani called Washington’s latest round of sanctions “inhumane” and appealed to human rights advocates around the globe to condemn it.

“All countries see these US moves are completely against international rules,” said Rouhani.

On Thursday, Iranian Foreign Minister Mohammad Javad Zarif took to Twitter to slam the US for trying to “blow up our remaining channels to pay for food and medicine” amid the pandemic.

“Iranians WILL survive this latest of cruelties,” he wrote. “But conspiring to starve a population is a crime against humanity. Culprits and enablers – who block our money – WILL face justice.”

Amid Covid19 pandemic, U.S. regime wants to blow up our remaining channels to pay for food & medicine.

Iranians WILL survive this latest of cruelties.

But conspiring to starve a population is a crime against humanity. Culprits & enablers—who block our money—WILL face justice. pic.twitter.com/n0fnXPNik8

Iran’s Ambassador to the United Nations, Majid Takht-Ravanchi, also weighed in on Friday.

In comments during a UN General Assembly meeting, Takht-Ravanchi said the US campaign of “maximum pressure” on Iran is an example of “state terrorism” aimed at bringing about regime change.

“The Islamic republic condemns terrorism in all shapes and forms, including state, economic and medical terrorism imposed through unilateral moves,” he added.

Trump’s administration began unleashing a torrent of sanctions aimed at choking off sources of revenue for the Iranian government since unilaterally withdrawing from the Iran nuclear deal with world powers in 2018.

The deal offered sanctions relief to Iran in exchange for curbs on its nuclear programme.

The Central Bank of Iran was already sanctioned by Washington under a “terrorist” designation in September 2019 for allegedly financing the Islamic Revolutionary Guard Corps (IRGC), which itself was designated as a “Foreign Terrorist Organization” by the US in a highly controversial move in April 2019.

In October 2018, the US sanctioned Parsian Bank, which facilitated the bulk of Iranian humanitarian trade, in a shock move.

“Even though we have been in a very tough spot in providing medicine and food for the people due to maximum pressure in recent months, we have not allowed any shortages through certain paths and methods,” he said, adding the central bank will continue to work with the private sector to provide essential goods.

Humanitarian trade is technically exempt from sanctions under international law.

The US issued a general licence with the new sanctions that states conducting or facilitating transactions for the provision of “agricultural commodities, food, medicine, or medical devices to Iran” is exempt.

Nevertheless, sanctions have had a chilling effect on Iran’s ability to purchase humanitarian goods because most foreign financial institutions were already wary of conducting any business with Iran for fear of falling afoul of US sanctions.

In October 2018, the International Court of Justice ordered the US to lift sanctions that affect humanitarian trade with Iran.

In response, the US withdrew from the 1955 Treaty of Amity with Iran that had opened the door for the ruling.

But the advent of the coronavirus pandemic has renewed calls for Washington to put the Iranian people before political agendas.

According to Ellie Geranmayeh, a senior policy fellow at the European Council on Foreign Relations (ECFR), it is “unconscionable” to further sanction a country at a new peak of COVID-19 infections.

“US officials have been on the record saying Iranian leaders must give in to US demands ‘if they want their people to eat’,” she told Al Jazeera.

“Some hawks in Washington hope that if they put Iranians in a pressure cooker, there will be more protests in Iran like the ones in November and this could destabilise the state.”

Some hawks in Washington hope that if they put Iranians in a pressure cooker, there will be more protests in Iran

After the government of Iranian President Hassan Rouhani cut petrol subsidies overnight in mid-November 2019,  mass protests sparked across Iran that authorities quelled through various means including an internet blackout and violent crackdowns on demonstrators.

The sanctions on Iran’s financial sector were championed by Israel and Iran hawks in the US including the hardline think-tank Foundation for Defense of Democracies (FDD), and a group of US lawmakers including Senators Ted Cruz and Tom Cotton.

In a Wall Street Journal op-ed in late August, FDD chief executive Mark Dubowitz argued that cutting off  “Tehran’s financial oxygen”, would play to Trump’s advantage in the 2020 presidential election.

That naked political calculus is not lost on critics of the Trump administration.

“This is a last-ditch attempt prior to US elections to ratchet up ‘maximum pressure’ on Iran,” ECFR’s Geranmayeh said.

Tyler Cullis, a lawyer at Ferrari & Associates, a Washington-based firm that specialises in OFAC sanctions, also sees the latest move as a political hedge should Trump lose his bid for re-election.

“My instinct is that Trump has engaged in such bad faith with respect to Iran – imposing sanctions not only to inflict harm on Iran, but also to prevent a Biden administration from reorienting American policy,” Cullis told Al Jazeera.

Europe and other signatories continue to support the nuclear deal, and rejected a unilateral attempt by Washington in late September to reinstate all UN sanctions on Iran.

European nations have been looking for ways to enable humanitarian trade with Iran.

The Instrument in Support for Trade Exchanges (INSTEX) is a special-purpose vehicle devised by Europe for just that purpose, but it has so far failed to play a significant role in facilitating trade between Iran and the EU in the face of US sanctions.

The government of Switzerland has also been working on the Swiss Humanitarian Trade Arrangement (SHTA) for more than two years, but the channel has only conducted a single deal so far.

Meanwhile, proponents of the US sanctions on Iran’s major banks claim that so-called “comfort letters” – assurances from the US Treasury that financial transactions can be processed in accordance with US law – should ameliorate concerns by foreign banks facilitating humanitarian trade with Iran.

Esfandyar Batmanghelidj, founder of Bourse & Bazaar, a think-tank focused on Iran’s economy, told Al Jazeera that foreign banks were not taking advantage of comfort letters even before the latest sanctions struck.

“Most global banks were hesitant to conduct humanitarian trade with the Iranian banks that have now been designated, even when it was explicitly permitted,” he said.

Batmanghelidj is hopeful Iranian firms will eventually find a way to conduct business without running transactions through domestic banks, but says this will be a complex and time-consuming process, which could lead to significant delays in the imports of food and medicine.

“Iran’s money transactions don’t go only through the banking system, other parallel systems can be used,” said Bahmani, who was at the head of the bank when Iran was facing both US and UN Security Council sanctions under former president Mahmoud Ahmadinejad.

Iran must now turn to a “capillary network of money exchanges” inside and outside the country to facilitate trade, he said.

But in the meantime, Bourse & Bazaar’s Batmanghelidj says delays in imports and a liquidity crisis resulting from the freezing of assets belonging to newly sanctioned banks will lead to further currency devaluation in Iran and higher prices for consumers.

“These kinds of disruptions have been a key contributor to inflation in the cost of food and healthcare,” he said. 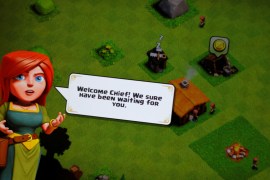 Locked out: Clash of Clans latest title off limits to Iran gamers

Iranian users have been blocked from some massively popular online games, including League of Legends. 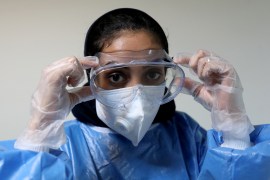 Highest single-day rise of 4,151 new COVID-19 infections is reported in the worst-hit country in the Middle East. 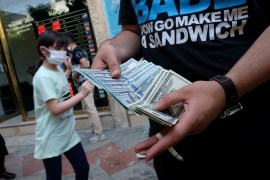