China unveiled the first glimpses of its economic plans for the next five years, promising to build the nation into a technological powerhouse as it emphasized quality growth over speed.

The new plan elevated China’s self-reliance in technology into a national strategic pillar, a move signaled by officials from President Xi Jinping down in the lead up to the meeting. Central to that endeavor is self-reliance in chips, the building blocks for innovations from artificial intelligence to fifth-generation networking and autonomous vehicles.

Laying out their vision for the next 15 years, officials said “making major breakthroughs in core technologies in key areas, China will become a global leader in innovation,” according to the communique published by Xinhua. 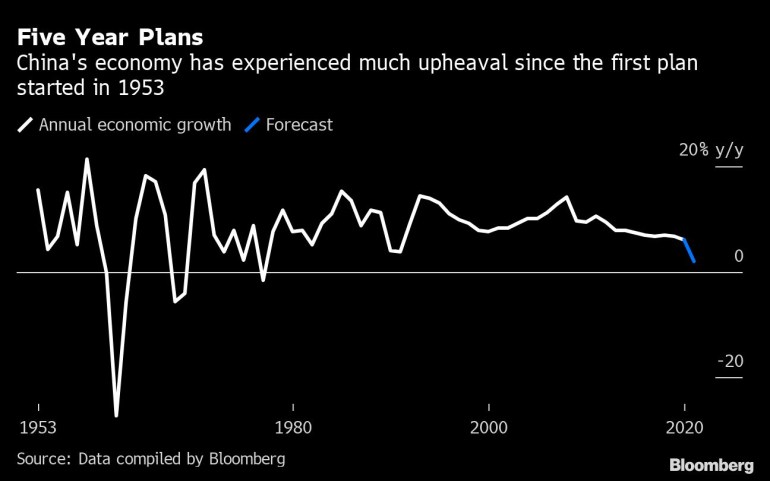 Beijing’s efforts are gaining urgency as the U.S. seeks to contain the rise of its geopolitical rival. The U.S. has pressured allies to shun equipment from Huawei Technologies Co., barred dozens of China’s largest tech companies from buying American parts, and even slapped bans on ByteDance Ltd.’s TikTok and Tencent Holdings Ltd.’s WeChat.

“Technology is the key now in the next area of development of China,” said Wang Huiyao, an adviser to China’s cabinet and founder of the Center for China and Globalization. “It’s a key area that China wants to give more attention, more resources and more development. I think that’s basically for China’s development in the future.”

Unlike the last five-year plan, which sought to achieve “medium-to-high growth” in order to build a “moderately prosperous society,” this plenum had been expected to focus on the quality rather than the pace of growth. In Thursday’s statement, officials pledged to stick to a strategy of boosting domestic demand and opening up the economy over the next five years.

Even though the plan doesn’t mention a specific rate of growth for gross domestic product, analysts said the government remains ambitious in its outlook.

“The leadership still expects the size of the economy, household income as well as GDP per capita to reach a ‘new milestone’ by 2035,” said Raymond Yeung, chief greater China economist at Australia and New Zealand Banking Group. “China did not abandon GDP targeting, it’s just expressed in a more subtle way.”

The document gave a nod to the “complicated international situation,” a phrase that has become party shorthand for the “America First” policies of U.S. President Donald Trump.

The statement said the nation would “basically form a new system of open economy at a higher level” in the next five years. While that repeated past promises of increased foreign access, the plan puts a timetable on making progress.

Along with the heightened U.S. tensions, a virus-battered world economy has prompted officials in Beijing to chart a course that draws on domestic resources and consumption to guarantee growth.

While that strategy – known as “dual circulation” – was mentioned twice in the communique, there wasn’t any specific explanation or details of what it entails. The nation needs to “smooth the domestic circulation, facilitate dual circulation at home and abroad, comprehensively promote consumption and expand room for investment,” according to the statement.

The party’s Central Committee – a group of some 200 top leaders – also sketched out goals as far as 2035, pledging to see the nation’s carbon emissions peaking and starting to decline in the period while raising per capita GDP to the status of a moderately developed country.

The plans are expected to be fleshed out in coming months before approval by China’s parliament next year.

Other key highlights from the communique:

China has been gradually relaxing its control over the currency and capital flows, including taking steps to liberalize the yuan following its recent appreciation.

With the world’s largest carbon footprint since 2004, China will aim to peak and then gradually lower its total emissions. The ruling party called for a significant green transformation of production and people’s lifestyles.

The Central Committee said it would seek a reasonable allocation of energy resources and improve efficiency. The world’s biggest food producer and consumer also vowed to speed ​​up modernization of the farming industry, ensure national food security and improve agricultural quality and competitiveness.

The party laid out plans for greater synchronization between economic and defense development, supporting Xi’s goal of building a world-class military by 2049. The communique called for speeding up defense modernization and to “realize the unity of a prosperous country and a strong military.”

Reaffirming its commitment to the “peaceful development” of ties across the Taiwan Strait, the party vowed to maintain “long-term prosperity and stability” in Hong Kong and Macau. The brief readout included a line calling for the “reunification of the motherland,” whereas a similar document five years ago emphasized economic cooperation and benefits for Taiwanese residents and companies.