Delivery delays during an election can’t be unlawful, because the Constitution doesn’t guarantee states any particular level of service when it comes to mail-in ballots, the U.S. Postal Service told a federal judge.

Postmaster General Louis DeJoy and President Donald Trump are seeking dismissal of a lawsuit brought by New York and other states that claim disruptive changes at the USPS over the summer are violating the Elections Clause of the Constitution by putting election mail at risk.

The Justice Department argued in a court filing Tuesday in Washington that the clause can’t restrict government agencies from carrying out operational changes or other activity that “may have an incidental impact” on voting.

The states’ theory “assumes that because the plaintiff states crafted their election laws with the expectation that USPS will provide a certain level of service, they now have a constitutional right to expect that level of service,” the U.S. said. The clause “does not shield states from any and all external circumstances that may impact state elections.”

The USPS was responding to an Oct. 19 letter to the court from New York Attorney General Letitia James, who argued the delays threaten the timely delivery of about 7 million ballots out of an estimated 80 million.

The changes, including the dismantling of hundreds of high-speed mail-sorting machines and cuts to overtime and late delivery trips, triggered several lawsuits and nationwide injunctions against the USPS.

But the court orders haven’t reversed the service delays, and Republicans and Democrats have been left to clash in courts across the country over rules for accepting ballots that arrive late even if they’re postmarked by Nov. 3.

James said in her letter that it’s a violation of the Elections Clause “for the Postal Service to take actions that are intended to, and do, have the effect of hampering state election administration.”

The U.S. said in its filing that state lawmakers can change the rules for accepting ballots if they’re worried about delivery delays, although Republican legislatures have largely resisted such efforts.

“The states remain free to alter their policies to account for any fears over the performance of USPS,” it said.

The Postal Service also blasted the states for suggesting that Trump’s negative comments about mail-in voting — including claims, without evidence, that the practice leads to widespread fraud — had anything to do with the changes put in place by DeJoy, a longtime Republican donor with no previous USPS experience.

The states “submit no evidence connecting these statements to the alleged USPS policy changes at issue,” it said. “Indeed, they do not cite to a single piece of evidence in the record suggesting that any of these alleged policy changes took place at the behest of the President.”

A judge handling another USPS case ruled in September that it was “easy to conclude” that DeJoy’s changes were intended to disrupt and challenge the legitimacy of the coming election, and that voter disenfranchisement was “at the heart” of the policies. 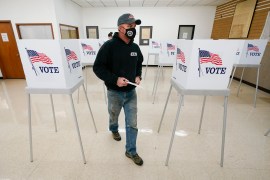 Complicated counts and Trump’s attacks on voting integrity has officials preparing for the worst on election night. 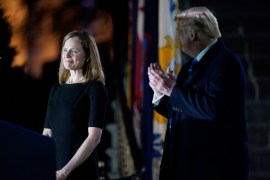 After a controversial Senate vote along party lines, Barrett is quickly sworn in at White House ceremony 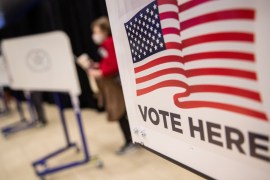 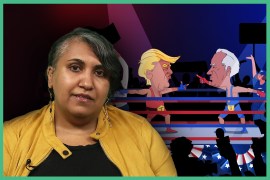 US Elections: Reporting in a Pandemic

“Sometimes I wonder how is this country going to carry on?”