With only 11 days left until the United States elections, American voters are diverging along different paths.

Economic paths that is.

Back in the spring, as pundits were prognosticating about how the economy would crawl out of the deep hole dug by the coronavirus pandemic, it was largely a toss-up between a “V-shaped” recovery – a sharp plunge followed by an equally sharp rebound, or a U-shaped recovery – where the economy nosedives, stagnates a bit, then bounces back.

But as the summer closed and trillions in federal pandemic relief aid to businesses and workers expired, the economy took an ominous detour down Sesame Street and picked up a new letter of the day.

In a K-shaped recovery, only parts of the economy rebound, while others lag behind. Sometimes very far behind. And those disparities ripple throughout society in the form of ever-widening inequality.

The recovery is looking rather K-shaped right now.  Millions of Americans are still struggling with the financial fallout of the pandemic; laid-off, struggling to pay rent, wondering when they will find another job or being forced to quit working to look after children who are learning remotely.

Meanwhile, people with stock portfolios, who own their own homes and can work remotely, are not only doing well, some of them are better off financially than before the pandemic struck.

Widening income and wealth inequality has been a feature of the US economy for decades.  But back in February, when the jobs market was on fire, those pernicious, yawning gaps had started to narrow.

That progress has fallen victim to COVID-19.  These charts explain how bad the damage is and the monumental task either President Donald Trump or his Democratic rival Joe Biden will face once the presidential election ballots are counted.

Last month, the US Federal Reserve said that by the end of June, US household wealth had recovered all pandemic-related losses in the first three months of the year – with change to spare.

The problem is – most of that rebound was fuelled by the stock market, meaning the gains accrued mostly to wealthy Americans. 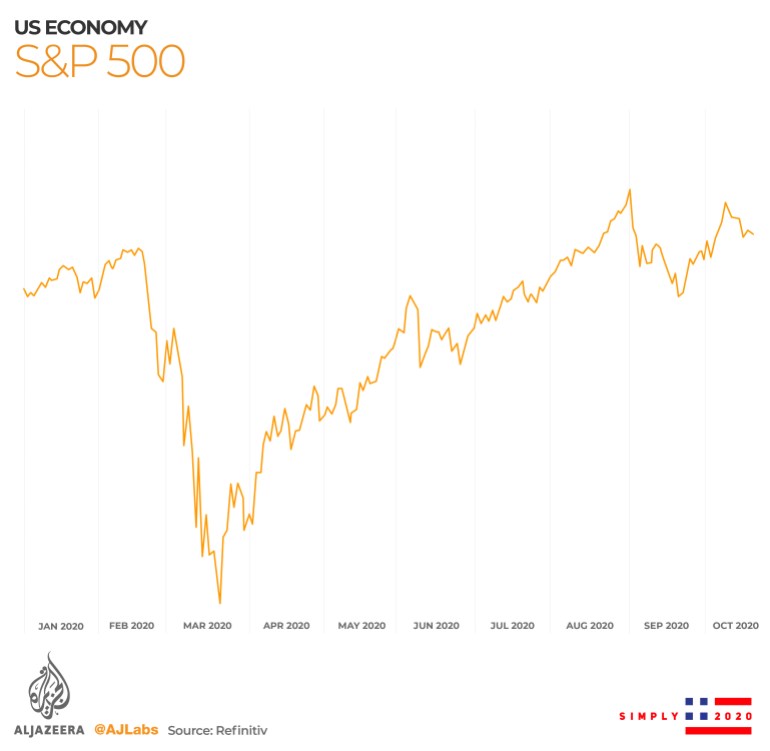 The S&P 500 – a proxy for the health of US retirement and college savings reports – plunged more than 33 percent between February 19 and March 23 as lockdowns swept the nation.

But the index soon came roaring back, hitting a new high on September 1, thanks in large part to the outsized influence of tech stocks – which have reaped the rewards of a societal shift to remote work and schooling. Trillions of dollars in financial lifelines from the Federal Reserve and Congress also helped shore up businesses and households and restore market confidence.

That’s the top of the K. 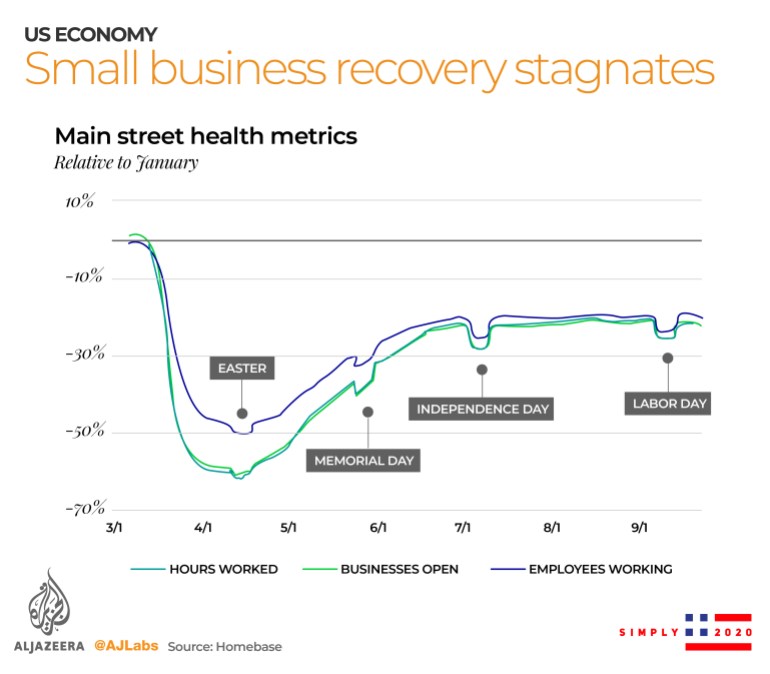 Meanwhile, down on Main Street, things are not looking so great at the bottom of the K.

Small businesses, which created two-thirds of net new jobs in the US before the pandemic, enjoyed a partial recovery in May through June. But those gains began to plateau in July – still far below January levels, according to data compiled by scheduling software firm Homebase.

In September, the number of people employed by America’s small business fell for the first time since the recovery began.

It’s not just people with stock portfolios, if you are a US worker earning $60,000 a year or more, the COVID-19 recession is more likely to feel like a distant memory.

Data compiled by Opportunity Insights shows that by September, the employment rate for high earners had nearly rebounded to January’s pre-pandemic levels.

By contrast, the employment rate in September for Americans earning less than $27,000 a year was almost 20 percent lower than January. 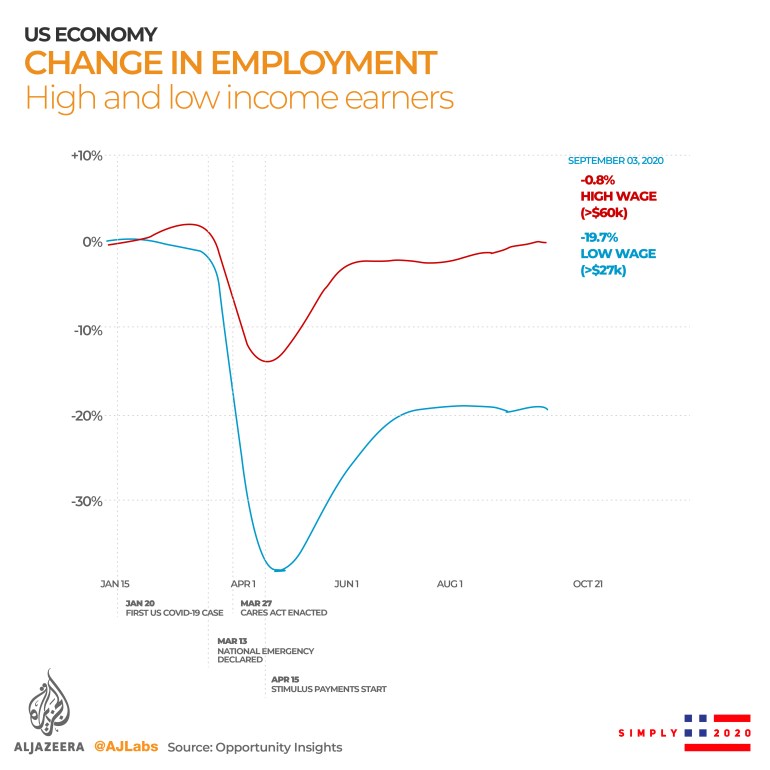 For Americans who own their own home, these are excellent times. One of the first things the Federal Reserve did to help the economy when the pandemic struck was to slash interest rates to near zero and start buying bonds with abandon – which also keeps borrowing costs low.

The US now has record-low mortgage rates. Throw in families who can afford to upgrade to bigger digs in the suburbs to accommodate remote work and school arrangements and you have a recipe for a red-hot housing market rebound.

And indeed, sales of homes that were previously owned have fully recovered and even surpassed pre-pandemic levels. In September, they hit a 14-year high, even though sales traditionally slow in the fall (autumn). 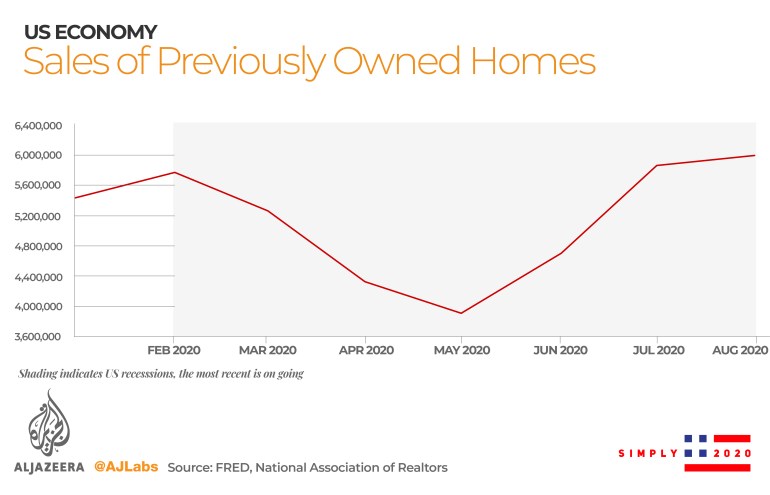 Times are feeling a lot leaner, though, for many renters.

Nearly one in three renters in the US did not pay their rent fully on time in the first week of October, while one in 10 started the month owing back rent, according to a housing payments survey by Apartment List.

Though October marked the third straight month of improvement for renters, Apartment List noted that could be because struggling renters are moving back in with family and friends, and simply falling out of their survey. 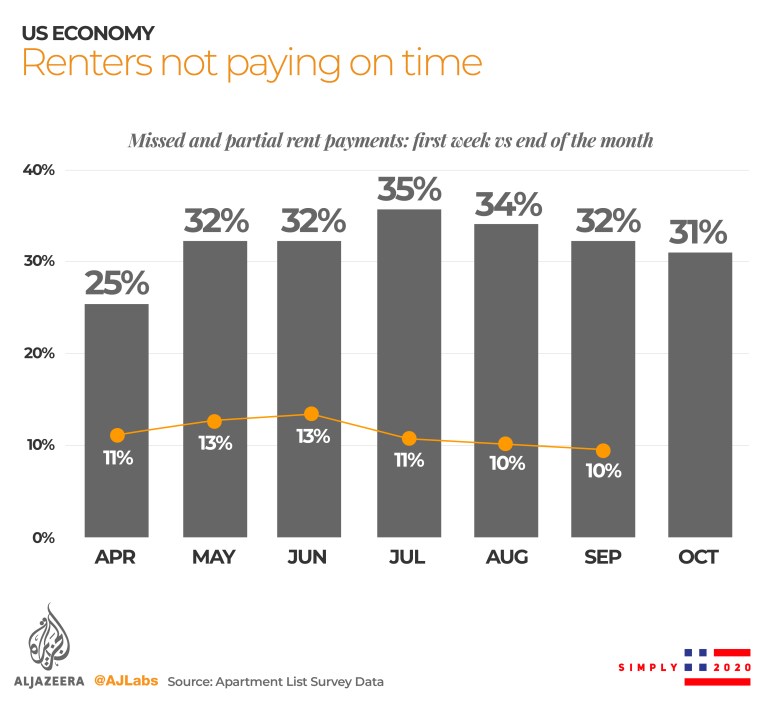 Those struggling to catch up on rent are also far more likely to be a person of colour. The share of Latino and African American renters starting October in arrears was more than double the share of white renters, according to Apartment List. 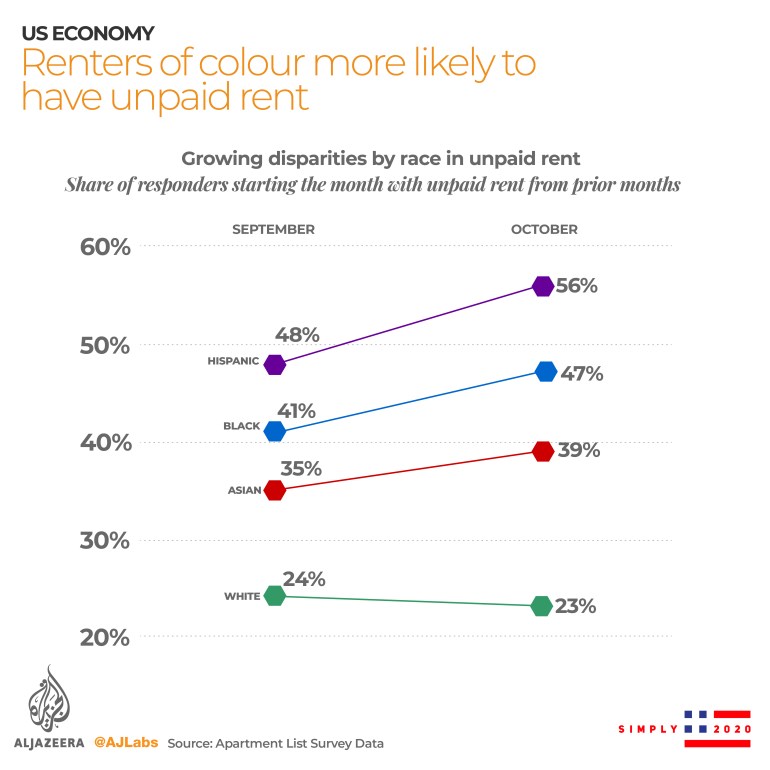 While the Great Recession hit men the hardest, the COVID-19 recession is walloping working women.

Women are also less likely to work in jobs where telecommuting is an option – 22 percent of women compared with 28 percent of men, according to a recent working paper published by the National Bureau of Economic Research.

In March, the unemployment rate for US men and women was equal at 4.4 percent.  An enormous gap opened up in April, and though it has since narrowed, it has yet to close. 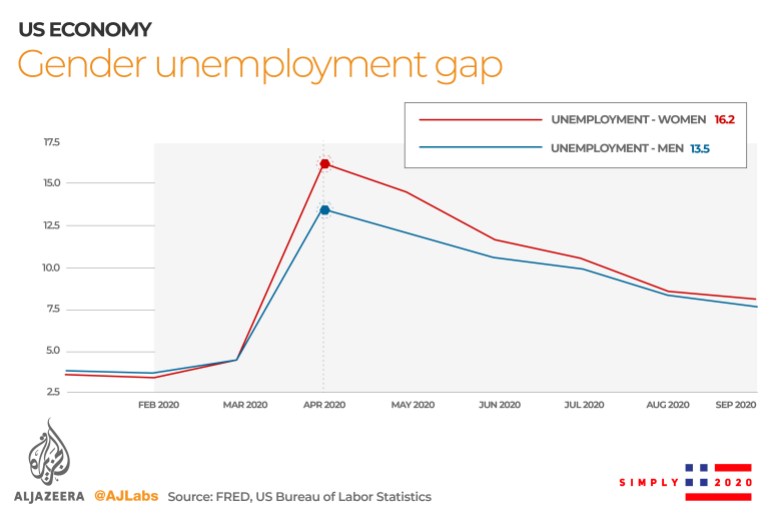 The pandemic has also shuttered daycare centres and promoted a switch to remote learning around the country.  That has heaped a lot of pressure on working parents – and it is still women who bear the brunt of looking after children.  The burden of working, caregiving and homeschooling is proving too much for some women, researchers warn.

Alarm bells sounded when we learned that in September, roughly 865,000 adult women – including 324,000 Latinas and 58,000 African American women – dropped out of the US labour force, about four times the amount of men, according to the US Bureau of Labor Statistics.

It is not only the gulf between men and women that’s getting wider.  The pandemic is also exacerbating racial disparities in unemployment.

Festering gaps had finally started to narrow prior to the pandemic. In February, the unemployment rate for African Americans was 2.7 percentage points higher than it was for whites. In September, that gap had almost doubled to 5.1 percentage points. 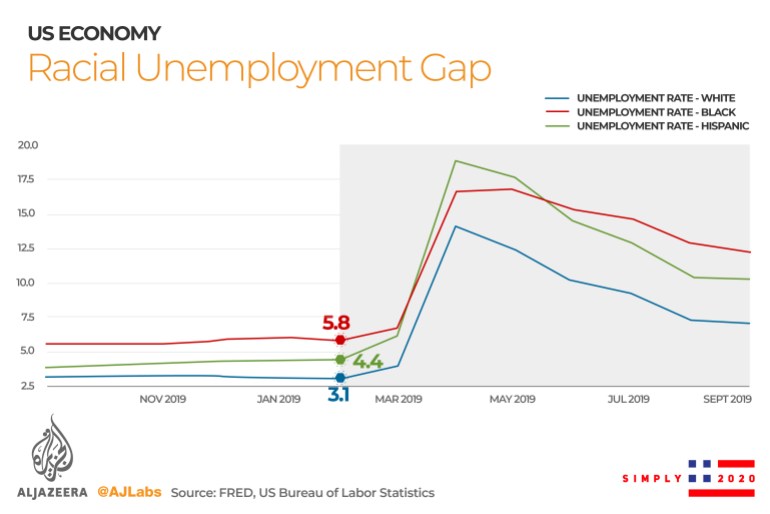