Bitcoin surged to the highest level since July 2019 after PayPal Holdings Inc. announced it will allow customers to use cryptocurrencies.

The largest digital coin increased as much as 4.9% to $12,488 Wednesday, surpassing the previous high for the year of $12,473 set in August. Gains among so-called alt coins were even larger, with Litecoin jumping more than 11% and Bitcoin Cash surging 8%.

PayPal customers can use select cryptocurrencies including Bitcoin, Ether, Bitcoin Cash and Litecoin on the platform.

Mike Novogratz, who runs Galaxy Investment Partners, on Twitter called it “the biggest news of the year in crypto,” adding that banks will embark on a race to service digital currencies. “We have crossed the rubicon,” he said.

The news sparked an exuberant response from crypto fans who pointed to a string of recent announcements that suggest wider acceptance by old-school financial mainstays. Two public companies – Square Inc. and MicroStrategy Inc. – said recently that they invested in Bitcoin. And Fidelity Investments announced in August that it’s launching its first Bitcoin fund, adding its establishment name and star power to the often-maligned asset class.

This PayPal news is the biggest news of the year in crypto. All banks will now be on a race to service crypto. We have crossed the rubicon people. Exciting day. 🔥🔥🔥🔥🔥🔥🔥🔥 https://t.co/hXpiJEDOb3

PayPal said it plans to make the features available as a funding source for purchases at its 26 million merchants worldwide and plans to expand it to Venmo soon.

Dan Schulman, the firm’s president and chief executive officer, said in a statement that “the shift to digital forms of currencies is inevitable, bringing with it clear advantages in terms of financial inclusion and access; efficiency, speed and resilience of the payments system; and the ability for governments to disburse funds to citizens quickly.” 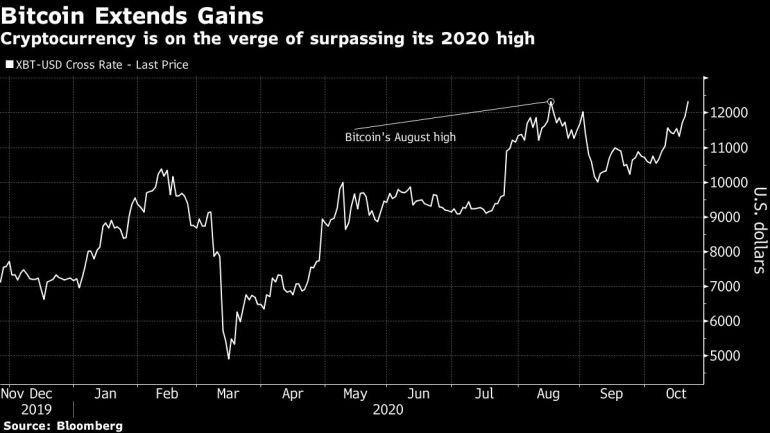 The Bloomberg Galaxy Crypto Index, which tracks some of the largest digital coins, also advanced Wednesday, rising as much as 5.1%.

Bitcoin’s been on a hot streak this month, rising more than 15% in October. Still, cryptocurrency use cases remain limited. Data from blockchain researcher Chainalysis Inc. last year showed hardly anyone used Bitcoin for anything beyond speculation.