Traders pondering how to play the Russian ruble have a new metric to follow: betting odds of a presidential election win by Joe Biden.

A slump in the currency in recent months has mirrored rising wagers that Biden will beat President Donald Trump on Nov. 3. After two days of gains, the ruble sank the most in emerging markets on Friday on news that Trump had contracted the coronavirus. 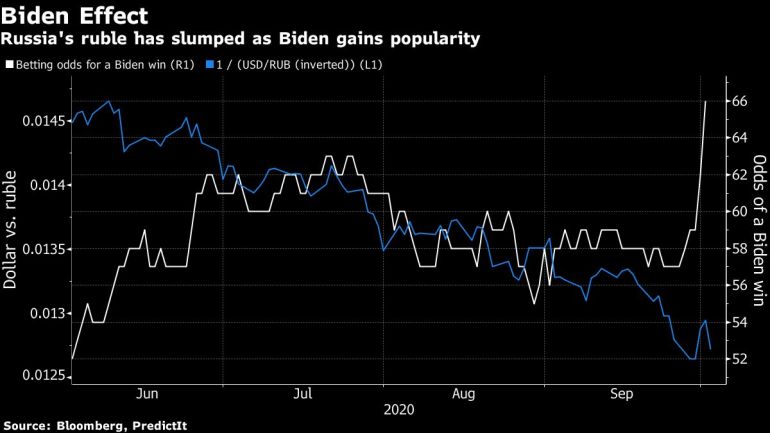 The market is betting a Democrat in the White House will more likely impose harsher sanctions on Russia, and the risk of such penalties might increase if the Kremlin tries to interfere in the vote to prevent a Biden win.

The trend is the opposite of 2016, when the Russian currency appreciated as Trump gained in the polls. Trump promised during his campaign to heal battered relations with the Kremlin, but his presidency ended up mired in allegations that Russia influenced the vote to help him win.

Only the Turkish lira has performed worse than the ruble among major emerging markets in the past three months. Both currencies are down more than 10% against the dollar.