U.S. manufacturing closed out a tumultuous year with the weakest monthly performance since the end of the recession, with orders shrinking and factories continuing to dial back production.

Stocks and Treasury yields, already lower after a U.S. airstrike killed one of Iran’s most powerful military leaders, extended declines after the report.

The Institute for Supply Management’s purchasing managers’ index fell to 47.2 in December from 48.1, the fifth straight month of contraction and missing estimates for a rise in a Bloomberg survey of economists, according to a report Friday. It was the worst reading since June 2009 and marked the eighth decline in the last nine months. Readings below 50 indicate activity is shrinking. 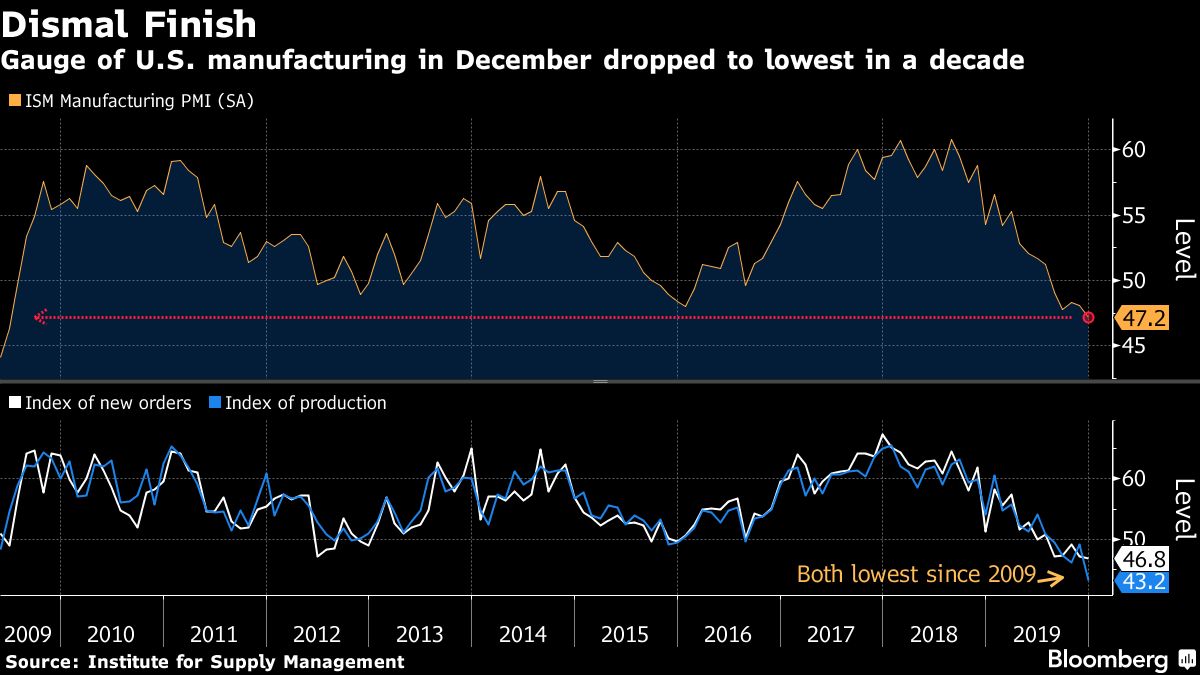 The deterioration was driven by the weakest gauges of new orders and production since April 2009. The data show American factories remain plagued by pullbacks in business investment at home, softer demand throughout the world and, until recently, an escalating trade war between the U.S. and China.

“Trade issues remain an issue for supply managers,” Timothy Fiore, chair of the ISM’s manufacturing survey committee, said on a call with reporters. “I think that unplanned factory closures and extended holiday periods had a part to play on the production side and likely the employment side.”

Fifteen of the 18 manufacturing industries reported contraction in December, led by apparel and wood products.

To be sure, the sub-50 ISM reading contrasts with IHS Markit’s purchasing managers’ index, which eased slightly to 52.4 in December but remained near a seven-month high. The nation’s two most-watched manufacturing surveys pointed in different directions in November as well, underscoring disagreement among economists and investors on which index offers a more accurate picture of the sector.

Even so, economists expect the record-long U.S. expansion to continue in 2020 despite factories’ malaise. A partial trade deal between the U.S. and China was announced Dec. 13, and President Donald Trump said this week that he will sign it Jan. 15.

While a thawing in trade relations could help, factories still face the repercussions of policy uncertainty, a weak corporate investment climate and a step down in global growth that will have a lingering impact on factory decisions in 2020.

What Our Economists Say

“An unexpected decline in the December ISM Manufacturing survey suggests it will take more than a limited ceasefire in the trade war to inject fresh life into the factory sector. While it may have been too early to capture the optimistic impacts of a reduction in uncertainty in this report, a continuation of soft readings in coming months would put the focus back on factors other than trade in explaining the challenging manufacturing environment, including soft global demand and a strong dollar.”

One reason the ISM’s gauges of production and new orders may have trouble recovering quickly is Boeing Co.’s struggle with its 737 Max airplane. Boeing told its suppliers to suspend parts shipments starting in mid-January following the grounding of the aircraft. Fiore said Boeing’s problems will probably be a drag on manufacturing for the next four to six months.

The ISM’s gauge of factory employment fell in December to the lowest level since January 2016, suggesting further softness in manufacturing hiring even as the rest of the jobs market remains broadly strong.

An index of prices paid showed input costs rising for the first time since May as the gauge of supplier deliveries held above 50, suggesting shipments of inputs are slowing.

The imports gauge contracted for the eighth time in nine months and the export gauge dipped further below the line between expansion and contraction.

–With assistance from Chris Middleton.