Citing an interior ministry spokesperson, the official Saudi Press Agency said on Saturday the blazes at the facilities in Abqaiq – home to the company’s largest oil processing plant – and Khurais were under control.

“At 4.00am (01:00 GMT) the industrial security teams of Aramco started dealing with fires at two of its facilities in Abqaiq and Khurais as a result of … drones,” it said, without specifying if there had been any casualties.

Two sources close to the matter told Reuters news agency that 5 million barrels a day of crude production had been impacted – close to half of the kingdom’s output or 5 percent of global oil supply.

Online videos showed smoke rising above the company’s facility in Abqaiq as what sounded like gunfire could be heard in the background.

Later on Saturday, the Houthis said the attacks were carried out by 10 drones and promised to widen the range of their attacks on Saudi Arabia, which leads a military coalition battling them in neighbouring Yemen.

“These attacks are our right and we warn the Saudis that our targets will keep expanding,” spokesman Yahya Saree said in a statement read out on the rebels’ Al Masirah TV.

“We have the right to strike back in retaliation to the air strikes and the targeting of our civilians for the last five years.”

The Saudi-led coalition said it was investigating the drone attacks and would confront “terrorist” threats to global energy security.

“Investigations are ongoing to determine the parties responsible for planning and executing these terrorist attacks,” coalition spokesman Colonel Turki al-Malki said in an English-language statement.

The Joint Forces Command of the Coalition to Restore Legitimacy in Yemen: Investigations Ongoing in the Terrorist Attack Against Two Saudi Aramco Facilities to Identify Parties Involved in the Attack https://t.co/ShTvP222F0

In March 2015, the Saudi-led coalition intervened in Yemen in support of the internationally recognised President Abd-Rabbu Mansour Hadi, who had been forced out of power by the Houthis.

The ensuing war has killed tens of thousands of people and sparked what the United Nations calls the world’s worst humanitarian crisis.

In recent months, the rebels have carried out a series of drone and missile attacks targeting Saudi air bases and other facilities. In August, a Houthi-claimed attack caused a fire at Aramco’s Shaybah natural gas liquefaction facility but no casualties were reported by the company. 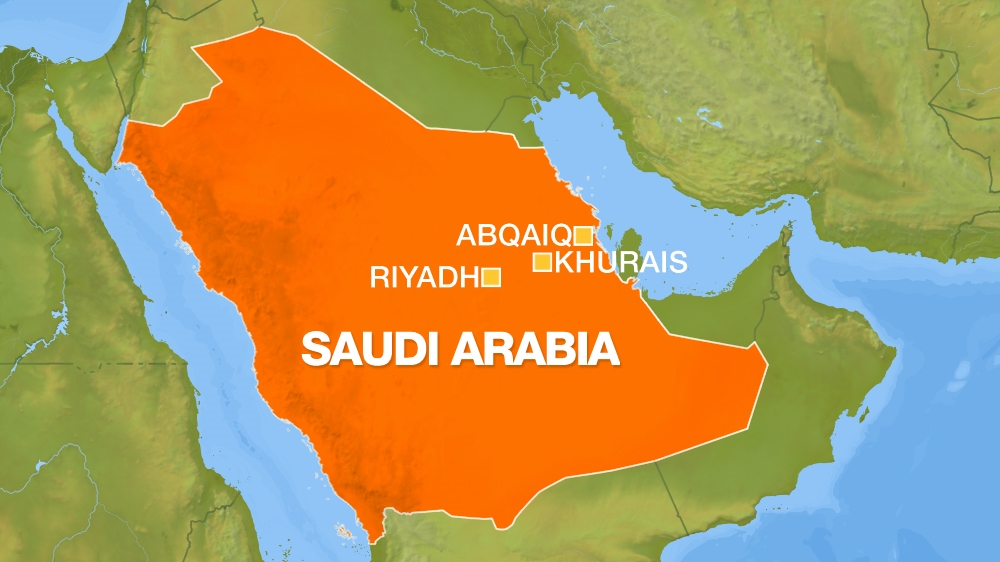 Saudi Aramco describes its Abqaiq oil processing facility, some 60 kilometres (37 miles) southwest of Dhahran in the kingdom’s Eastern Province, as “the largest crude oil stabilisation plant in the world”.

The facility processes sour crude oil into sweet crude, then transports it to transhipment points on the Gulf and the Red Sea. Estimates suggest it can process up to seven million barrels of crude oil a day.

The plant has been targeted in the past – in February 2006, al-Qaeda-claimed suicide bombers tried but failed to attack the oil complex.

The Khurais complex is located about 160km (99 miles) from the capital, Riyadh. It has estimated reserves of more than 20bn barrels of oil, according to Aramco.

In a Twitter post on Saturday, US Ambassador to Saudi Arabia John Abizaid said Washington “strongly” condemned the attacks on the two facilities.

“These attacks against critical infrastructure endanger civilians, are unacceptable, and sooner or later will result in innocent lives being lost,” he wrote.

There was no immediate effect on global oil prices as markets were closed for the weekend across the world. Benchmark Brent crude had been trading at just above $60 a barrel.

Al Jazeera’s Osama Bin Javaid, who examined the strategic importance of the oil giant in his documentary titled Saudi Aramco: The Company and the State, said the attack “is going to be a major blow for oil production”.

“Saudi Aramco is not an ordinary company. It is a company which runs the country,” he said from Doha.

“We don’t know how much of the facility has been damaged but this will bring down Saudi oil production to a fraction of what it is now. This will also have an impact on global oil production.”

The attacks come as Saudi Arabia, the world’s leading crude exporter, steps up preparations for a much-anticipated initial public offering of Aramco.

The company is ready for a two-stage stock market debut including an international listing “very soon”, its CEO Amin Nasser told reporters earlier this week.