Warsaw, Poland – Ryszard Pierzchala has been growing red currants in Nowa Slupia for more than four decades. But with this year’s low fruit prices, he is unable to pay his fruit pickers’ wages.

So Pierzchala has simply left this year’s harvest on the bushes.

Along with his friends in the same business, Pierzchala says he struggles to meet employee expectations.

“Pickers used to sleep in the barn. Now they want a modern toilet,” he told Al Jazeera. “They want three meals per day and a good salary. At today’s prices, hardly anyone can meet those requirements.”

Pierzchala has invited people to pick the currants for themselves – for free. Despite some people taking him up on the offer, only one-fifth of the fruit has been picked.

“Pheasants and partridges will come peck at the rest,” he chuckled. “People are doing better these days. They don’t have to go out into the field, endure various weather conditions, and earn 70 zlotys ($18) a day.”

Polish employers are feeling the labour pinch, as unemployment in Poland dips to its lowest levels since 1991, reaching 5.2 percent in July, according to Poland’s statistics authority. 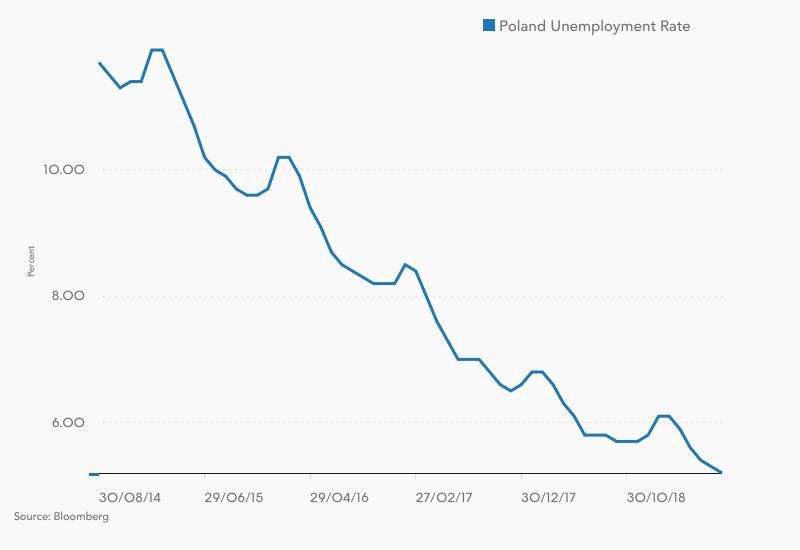 In a recent survey by Polish human-resources firm Work Services SA, 49 percent of companies said they had trouble finding employees during the past few months. The shortage of workers is also impacting wage growth, which accelerated to 7.4 percent year-on-year in July.

Industry figures in low-margin sectors such as construction and retail are increasingly vocal about being pushed underwater.

Labour market tightening would generally be expected to slow, as the country approaches its so-called natural rate of unemployment, in which there is sustainable equilibrium.

Yet a report by PwC estimates the shortfall to reach 1.5 million workers by 2025.

Other booming Central European economies are also feeling the dearth of workers, as populations shrink due to tumbling birth rates and high emigration.

Unemployment is below four percent in Poland, the Czech Republic and Hungary, and at 5.4 percent in Slovakia, according to Eurostat.

‘Culture is the same’

In past years, the Polish economy has been propped up by migrants. About 1.5 million Ukrainians have stood in for the 1.7 million Poles who went westward since Warsaw joined the EU in 2004. According to recruitment company Personnel Service, more than one-fifth of Polish companies now employ Ukrainian workers.

Ukrainians make up 75 percent of the 600,000 foreigners paying contributions to Poland’s social security office – 25 times more than a decade ago.

Kazimierz Czesny, director at furniture company Wersal Meble, said that 400 of his 1,000 employees came from Ukraine. He told Al Jazeera that they opt for Ukrainians due to the similarities between the Polish and Ukrainian languages and because “the culture is the same”.

He added that whole families have settled near his company’s factory, buying their own apartments and sending their children to local schools. When they are off work, Ukrainians and Poles play football together.

But the Ukrainian migrant worker population is set to change as Germany plans on opening its market to non-EU workers in 2020. Poland’s central bank warns that the number of Ukrainian workers in Poland could fall by 20 to 25 percent by 2024.

But tapping into these new sources is proving surprisingly challenging.

“Sourcing workers from Asia is incredibly hard,” said Artur Sawastian, head of APS Profit. His recruitment agency has been moving away from hiring Asian workers because of the high rate of visa denial.

There is a simplified procedure for seasonal workers coming for a maximum of six months from Russia, Belarus, Ukraine, Georgia, Armenia and Moldova. But people from other nations face a more stringent process, making hiring time-consuming and less predictable.

The throughput of the Polish consular system is another bottleneck for Asian workers. Poland has six consulates in Ukraine to service a country of 40 million, yet only two in India to service 1.5 billion people, including citizens of neighbouring Bangladesh and Nepal.

“Vietnam, Philippines, Oceania, Indonesia – these are where we are looking now,” said Solecki. “Workers are also coming from South America, from Colombia, [from] Venezuela.”

At the same time, some Polish companies are trying to access untapped local reserves.

As early as 2010, furniture company Gabi Meble opened a factory next to Czarne prison in northwest Poland, employing some 100 inmates. Amica, a household appliance manufacturer, struck a deal last year with the local prison to employ up to 200 inmates at its new factory.

Other companies are trying to get the upper hand through recruitment technology or referral bonuses.

He said there are enough workers in Poland for the firm. “It’s just a matter of making our offer attractive. That is why they come to us, and not our competition.”

Budimex sends messages with job offers to people passing through construction sites, usually those of their competitors.

In November 2019, Budimex was the first company in Poland to launch an online worker referral programme not just confined to company employees. Anyone who recommends a worker who is then hired by Budimex receives a cash prize of up to 4,000 Polish zlotys ($1,007).

It was also the first to start using recruitment bots on Facebook that ask job candidates about their experience and try to match them with openings.

Meanwhile, the ruling Law and Justice party is struggling to square its notoriously anti-migrant rhetoric with the booming economy’s reliance on foreign labour.

Last September, Pawel Chorazy – then the deputy minister for development – was fired after a public admission that migrants are key to Poland’s prosperity.

The political contradiction may be familiar to other populist leaders. United States President Donald Trump – who had originally planned to visit Warsaw for the September 1 commemorations of the outbreak of World War II – boasts about the lowest unemployment in the US in almost five decades.

Yet Trump also has recently proposed restrictions on migration that could make his own country’s labour shortage more acute. Poland could find itself in a similar situation as its ally on the other side of the Atlantic, with growth dependent on a robust job market buttressed by new arrivals.