In brandishing U.S. tariffs on Mexican imports, a surprise move that sent global financial markets into a tizzy Friday, President Donald Trump is taking aim at yet another ally and key trading partner.

The two nation’s economies have been mutually supportive for more than two decades, helped by the North American Free Trade Agreement in 1994, according to a March report from the Congressional Research Service, an analytical arm of the U.S. legislature.

The result is an intertwining of interests through trade in goods and supply chains, especially in the auto industry.

“The consequences for Mexico will be negative and severe,” said Tom Orlik, chief economist at Bloomberg Economics, of the tariff threat. “The U.S. is less prepared to fight a multi-front trade war than the rosy first-quarter gross domestic product numbers suggest.” 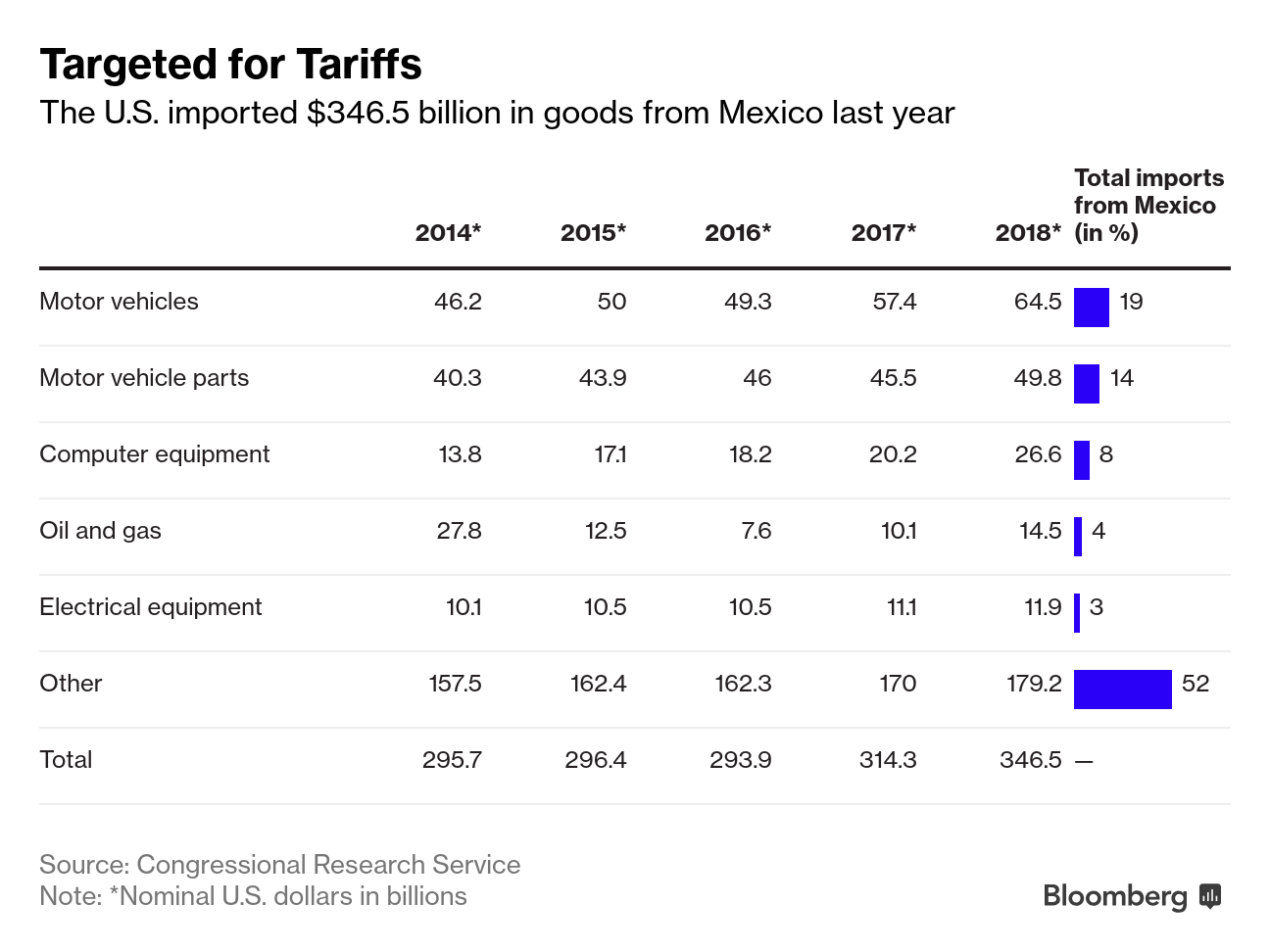 Here’s a snapshot of the nations’ increasing interdependence over the last quarter-century, and what’s at stake in a trade war across the border.

U.S. exports to Mexico rose to $265 billion last year, from $41.6 billion in 1993. Broken down by product, shipments heading south look like this: petroleum and coal products (11%), auto parts (8%), computer equipment (7%), semiconductors and other electronic components (5%), and basic chemicals (4%).

While the U.S. trade deficit with Mexico was almost $82 billion in 2018, American has a trade surplus with Mexico in services.

Looking into the numbers, there’s even more at stake: About two-thirds of all U.S. imports from Mexico is related to trading within a company. This is because American manufacturers have significant production south of the border, said Torsten Slok, chief international economist at Deutsche Bank AG. If the duties are implemented “it will be a serious downside risk to the U.S. economy,” he said.

“This is really going to hurt American businesses who use Mexico to reduce their costs and stay competitive,” said Mary Lovely, an economics professor at Syracuse University.

As for American consumers, Chua Hak Bin, an economist at Maybank Kim Eng Research Ltd., said they “will bear an increasing proportion of the cost from tariff hikes as the coverage spreads to consumer goods.”

The U.S. is Mexico’s largest source of foreign direct investment, according to the Congressional Research Service. American FDI reached a high of $110 billion in 2017, compared with $17 billion in 1994. While the flow of investment in the other direction is much lower, it’s jumped from $2.1 billion during the first year of Nafta to $18 billion in 2017.

In addition to investment and tourism, payments sent home from friends and family living abroad are one of the three highest sources of foreign currency for Mexico, and most of those transfers come from workers in the U.S. Record remittances to Mexico were set in 2017, with a total of $28.8 billion, up 7.5% from 2016.