Just before midday in early February 2017, Renato Anglao, a leader of the indigenous Manobo community, was riding his motorcycle with his wife and their five-year-old child on board, when they were waylaid by three unidentified men.

The Anglaos had just finished buying school supplies and were heading to their home in Bukidnon province, Mindanao, in the southern Philippines when the attackers struck.

The gunmen, who were also on a motorcycle, pulled up alongside and shot Anglao at close range, hitting him in the head and chest and escaping quickly.

Anglao’s wife and child were uninjured, but he was pronounced dead on the spot.

On Wednesday, Global Witness, an international land rights and corruption watchdog, accused Del Monte Philippines, a unit of the pineapple and banana-producing global food giant, Del Monte, of being complicit in Anglao’s death.

In a report, Global Witness said the company “failed to identify historic land conflicts” and maintained agreements with a local politician and landlord, “despite violence against indigenous activists”, including Anglao.

Anglao’s murder remains unresolved more than two years after the attack, a reflection of the worsening culture of violence and impunity under President Rodrigo Duterte‘s administration, rights groups said.

At the time of his death, Anglao was reportedly leading a group of 80 indigenous families in defending 300 hectares (741 acres) of their ancestral land in Quezon town, following attempts to seize it.

The Tribal Indigenous Oppressed Group Association (TINDOGA) also accused Pablo Lorenzo, then vice mayor of Quezon, of trying to grab their land and convert it to commercial farming. Lorenzo was elected mayor of Quezon in May 2019.

TINDOGA has claimed that Lorenzo threatened Anglao before the killing. In November 2015, Lorenzo reportedly told Anglao in person that if he did not stop his activities, he would “regret it”.

Lorenzo owns the Montalvan Ranch, which occupies a vast tract of land estimated to be approximately 12,000 hectares (49,421 acres) as of 2012, according to Mindanews.

TINDOGA maintains that the ancestral land occupied by the ranch had only been on loan, not sold, and that indigenous Manobos are its rightful owners.

“The investigation reveals how for many years Del Monte Philippines had a business agreement with Pablo Lorenzo to grow pineapples for them,” the report said.

“They also employed him as a consultant, and renewed their contracts with him even after evidence of violence associated with his ranches came to light, and a government commission backed community claims.”

Failure of due diligence

Global Witness said the Manila-based company “effectively failed to do adequate due diligence before and during entering into contracts” with Lorenzo until March 2019.

The report quoted Del Monte Philippines as saying that “it had moved to end the growership agreement” with Lorenzo when it discovered that he was also a public official.

But the company said that it was never aware of the community claims or alleged violence.

In a statement to Global Witness, the company said, “We are certain that if the [violent] incident[s] and allegation [that Pablo Lorenzo was associated with Renato’s murder] were brought to our company’s attention, we would have investigated the same and taken any necessary steps.”

Given the history of land conflict in Bukidnon, known as the “food basket” of the Philippines, Global Witness said Del Monte’s response raised “questions about the company’s commitment to respecting the rights of local indigenous communities.”

Del Monte Philippines did not respond to Al Jazeera’s requests for comment on the Global Witness report.

In an article published online, Lorenzo was also quoted as saying that he was committed “to provide solutions” for the “longwinded problems” of the indigenous Manobos.

Lorenzo also “stressed the important role played by the indigenous people in the development” of his town, according to the article, which was accompanied by a photo of the politician hugging a tribesperson. The article did not address specific allegations against the mayor.

In March 2014, Lorenzo’s “trigger-happy armed guards” were also accused of killing one protester and wounding two others – all members of TINDOGA – during a protest at Montalvan Ranch, according to the Kalumbay Regional Lumad Organization.

Al Jazeera contacted the mayor’s office but had not received a response at the time of publication.

Another major global agribusiness brand, Dole Philippines, has been linked through its suppliers to allegations of fraud and coercion to remove indigenous people from a banana plantation in Mindanao.

“As demonstrated by the allegations of corruption and violence around a nearby plantation run by global food giant Dole, this story surrounding Del Monte is, tragically, far from an exception,” Ben Leather, Global Witness senior campaigner, said in a statement.

“Corporate greed is not being held to account in the Philippines, with those standing up and speaking out being silenced without consequence.”

Global Witness is urging the Philippine government to protect the indigenous Manobos from violence, and prosecute those who were involved in Anglao’s murder.

It also urged companies, including Del Monte, that source produce from the Philippines to ensure that their suppliers “adhere to international law and best practice, and are not associated with human rights abuses”.

The latest Global Witness revelations follow an earlier report, which said the Philippines was the country with the highest number of killings of land and environmental defenders in 2018, with at least 30 recorded deaths.

Since that report was published in July, several more land rights activists and environmentalists have been killed in Mindanao, which has been under martial law starting in 2017.

On Monday evening, Angelito Marivao, a 49-year-old rights group leader who opposed the entry of mining to Bukidnon, was killed.

Marivao was the 16th land rights defender killed in 2019 in the province of Bukidnon alone, according to Al Jazeera’s count.

On September 11, Nedis Bacong, a 57-year-old leader of a farmers group in Bukidnon, was shot three times in the head.

On August 26, Leah Tumbalang, mother of seven and an indigenous Manobo activist, was shot in the forehead and killed.

The rash of killings coincides with the alleged “red-tagging” campaign, in which pro-government militias and authorities accuse activists and human rights activists of being communist sympathisers. President Duterte has declared the communist fighters who have waged a rebellion for five decades to be “terrorists”.

Several people have been killed after being “red-tagged” and included on a “hit list”, according to Philippine media, among them human rights lawyer, Anthony Trinidad, who was shot and killed in his hometown on Negros island in July.

In a statement, KMP, a group of activist farmers, noted that attacks on rights advocates had “drastically increased since the declaration and extension of Martial Law in Mindanao in 2017”.

Leather of Global Witness added: “In spite of President Duterte’s promises to protect citizens from the abuses of vested interests, ‘business at all costs’ continues as usual, while those standing up for land rights and the environment are threatened and even killed.” 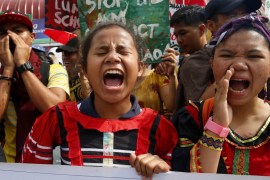 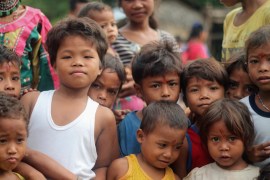 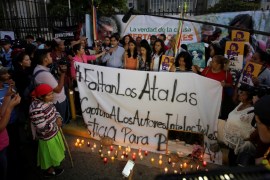