Bethlehem, occupied West Bank – During the day, the Bethlehem Checkpoint 300 tells only half the story. A few lone travellers make the crossing in mere minutes, passing through multiple electronic turnstiles and a warehouse-like compound, and undergoing a quick passport check before leaving the occupied West Bank and entering Israel.

For Palestinian workers making their way through the terminal during the dead of night, however, the same crossing can take hours.

About 2am is the best time to get through the checkpoint, before it gets too crowded. By 3am, hundreds of men are crammed shoulder-to-shoulder in the terminal. Clouds of white breath rise from the crowd and disappear. Bundled in thick, worn coats, the men are patient but anxious.

Talib Ahmed, 49, has been doing building work in Israel for more than 30 years.

“I woke up at 1:30 in the morning to get here by 3am,” Ahmed told Al Jazeera, nursing a small paper cup of spiced Arabic coffee in one hand and a cigarette in the other. “It’s cold and dark when I wake up, and the rest of my family is asleep.

“I do this every morning, five days a week, so I can cross through to work in Israel and make some money to feed my eight children. I make enough to give them an OK life, even though I can’t give them a really good life.”

Ahmed, who lays tiles in houses, says the work requires a precision that his arthritic hands struggle to achieve. His back is sore from crouching, and he seldom has time to play with his children or spend time with his wife.

“I leave when my family is sleeping, and when I get back, I have an hour or two before I have to sleep, so I can repeat the whole day again,” Ahmed explained. “But I thank God. My job pays better than I could make in the West Bank.”

Unemployment in the occupied West Bank was around 15 percent during the second quarter of 2015, while the average daily wage sits at $25 – half of those who work in Israel, according to the Palestinian Central Bureau of Statistics.

More than 30,000 Palestinians legally make the journey through checkpoints between the occupied West Bank and Israel each morning, while thousands more are estimated to make the trek illegally, as only a small percentage of permit requests are approved.

Mohammed Sabah, 55, began working in Israel when he was 20. Back then, permits were not needed for Palestinians to work in Israeli markets, he said.

Sabah had to get his first permit during the first Intifada, but restrictions tightened further after the second Intifada ended in 2005. Working without a permit became more difficult, as did conditions for workers travelling back and forth, he said.

“I used to drive my car to work in Israel,” Sabah told Al Jazeera. “I am too old for this now, having to come to this checkpoint so early in the morning and standing here for hours. I wish the old days could come back.”

READ MORE: Death and humiliation – A tale of a Palestinian village

The relationship between Israeli and Palestinian co-workers has also changed since Sabah was a young man.

“Before we worked in Israel to make a living, but we also had friends there,” he said. “Our Israeli co-workers would invite us to their house, or after work some of us could go swimming in Tel Aviv. We had a life. Now there is no life; just work and sleep.”

wage in the West Bank, I would never think for a moment to work in Israel.”]

Since the start of October, when violence in the occupied West Bank and Israel began to spike, Sabah said he has grown increasingly scared of being attacked or mistaken for an attacker while en route to and from work.

Many workers told Al Jazeera that they are careful not to reach into their pockets for their phones in crowded areas, and they no longer bring eating utensils to work in their packed lunches for fear of being accused of carrying or reaching for a weapon.

Allaa Atwan, a 29-year-old carpenter who is a married father of three, believes that he was given a permit because he has an established family in the West Bank, noting that young, single Palestinian men are looked upon with more suspicion by Israeli authorities.

After two years of working inside Israel, however, he is now considering giving up his job.

“I don’t see my children,” Atwan said. “I am awake way before anyone else is, and when I get home it’s late and I am exhausted, like an old man.

“More importantly, I am the only one providing for my family, and things are different now. It is dangerous for me to walk the streets in Israel. I am terrified of being arrested or hurt or killed for being in the wrong place at the wrong time. What would happen to my family? I have been asking myself every day if the better wages are worth it.”

During the first week of December, Atwan said the checkpoint got so backed up with workers trying to get through that Israeli soldiers came out with guns drawn.

“If one person would have gotten scared and moved to run, I can’t even imagine what could have happened, we were all packed so tightly,” Atwan said. “They treat us like animals at this checkpoint, when all anyone is trying to do is work so they don’t have to hold their hand out for food.”

Ahmad Hirzat, 23, from the West Bank town of Yatta, got his first permit only a few weeks ago. Because of his age, Hirzat said he has been tackling rumours in his neighborhood.

“People in my area are confused as to how I got my work permit … People are saying I must be a spy, working for Israel. Some of them are joking, but a lot of others are serious,” Hirzat told Al Jazeera.

While he hopes to quell that distrust, he is pleased at the chance to make better wages.

“I am literally making around five or six times more for the same amount of construction work in Israel,” Hirzat said. “Yes, I have to wake up at 1am to get to work at 7am, but I have a chance for a life now. I can start to build a house now; I can send my little brothers to school now; I can start thinking about getting married now. I didn’t have that before.”

Despite the increased dangers that many workers have felt lately, Hirzat has not considered giving up his job.

“I have a future now,” he said. “The Palestinian government couldn’t give me that, but in Israel I make $75 a day. If I could make that wage in the West Bank, I would never think for a moment about working in Israel. I can already see from the old men here at the checkpoint, this is my future.” 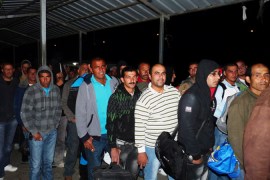 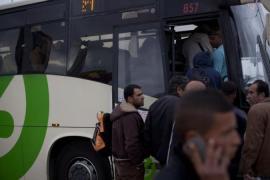