Multinational sportswear company Nike has cancelled its contract with Philippine boxing megastar Manny Pacquiao over remarks he made in recent days saying that gays were “worse than animals”.

In a statement obtained by US media on Wednesday, the company said: “We find Manny Pacquiao’s comments abhorrent. Nike strongly opposes discrimination of any kind and has a long history of supporting and standing up for the rights of the LGBT community.”

Pacquiao, revered in the Philippines for winning world boxing titles in eight different weight classes during his 20-year career, suddenly fell from grace after a 30-second interview this week on local television about same-sex marriage, which he opposes.

“It’s just common sense. Do you see any animals of the same sex mating? Animals are better off, they can distinguish between male and female,” Pacquiao told TV5 on Monday.

“Now if men are mating with men and women with women, then they are worse than animals,” he said.

Pacquiao later apologised for his remarks in a video published on his Twitter feed on Tuesday.

Forbes Magazine estimates that Pacquiao earned $160m in 2015, including $148m in winnings and $12m in endorsements.

This is not the first time Pacquiao, a sitting two-term congressman in the Philippines, had incurred the ire of the lesbian, gay, bisexual and transgender community for his comments on same-sex marriage. He also apologised for his remarks in 2012.

Same-sex marriage is not allowed in the Philippines, where more than 80 percent of the 100 million population is Roman Catholic.

The 37-year old congressman is among those favoured to win a Senate seat at the May elections based on independent pollsters’ surveys. Latest surveys showed him in eighth place for the race to win 12 vacant seats in the Senate. 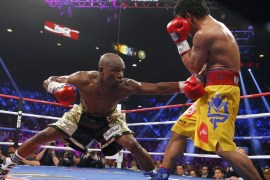 Pacquiao eyes final fight before hanging up his gloves

Filipino boxer has not fought since losing to Mayweather earlier this year. 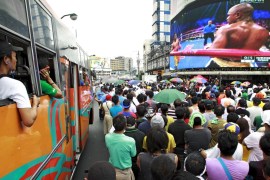 The fight of the century that wasn’t

The Mayweather-Pacquiao fight may represent the peak of boxing as a sport before its inevitable decline.