Caracas – Venezuela’s President Nicolas Maduro has said that the country’s economy is in a state of emergency as oil prices fall to just $33 a barrel, the lowest rate in more than a decade.

Venezuela needs oil prices to hit $111 a barrel just to break even.

As a result, inflation continues to rise in Caracas. A recent report leaked from within Venezuela’s Central Bank puts the country’s inflation rate at 270 percent, marking what economists now consider to be the worst crisis in the oil-rich country’s modern history.

“Venezuela is in the process of hyper inflation, huge fiscal deficit financed by money printing, lack of foreign reserves, and the only commodity of importance in this foreign trade, oil, falling at levels below over the last 11 years,” Orlando Ochoa, an economist, told Al Jazeera.

“It is the perfect storm.” 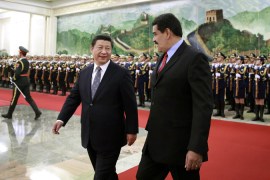 Beijing agrees to more than $20bn in economic, social, and oil-related projects, as Caracas remains mired in recession.