China has cut interest rates for a fifth time in nine months in a new bid to shore up slowing economic growth, amid a further sharp drop of its stock market.

The central bank announced on Tuesday that the benchmark rate for a one-year loan will be cut by 0.25 percentage point to 4.6 percent, and the one-year rate for deposits will fall by a similar margin to 1.75 percent.

It also increased the amount of money available for lending by reducing the minimum reserves banks are required to hold by 0.5 percentage point.

The cut in interest rates had been anticipated by financial analysts after exports, manufacturing and other economic indicators weakened by larger margins than expected.

Beijing reported economic growth held steady at seven percent in the latest quarter, but that was due to a stock market boom that pushed up the contribution from financial industries while other sectors weakened.

In a statement, the central bank cited “downward pressure” on the country’s economic growth rate and said it wanted to lower financing costs for Chinese companies.

The bank said the cut was to reduce “the social cost of financing to promote and support the sustainable and healthy developments of the real economy”.

It also promised to pay close attention to liquidity, or the availability of credit, a possible attempt to ease concern that a recent rise in capital outflows from China might leave less money for lending.

Exports in July fell by an unexpectedly large margin of 8.3 percent, while a manufacturing survey found activity this month contracted at a faster rate than anticipated.

In an interview with Al Jazeera, Steve Keen, head of the school of economics, politics and history at Kingston University in London, said he expects more volitility ahead.

“This is the signal of the beginning of a debt crisis that’s been building up in China, since it had an exploding level of private debt, starting back in 2009,” Keen said.

“This has been a crisis waiting to happen. And it is not just the stock market, it’s also the property market and the economy as well,” he said, adding that he also expected the unemployment rate to go up. 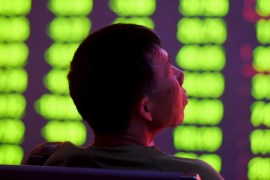 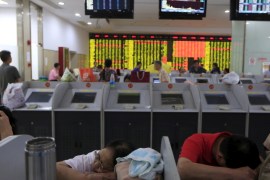