The International Monetary Fund can only participate in Greece’s bailout if its European creditors produce a clear debt sustainability, a senior official has said.

The threat came on Tuesday, a day before Greece’s parliament were due to start debating on a new package of austerity measures and economic reforms to secure the new bailout deal that was reached between Greece and its EU creditors on Monday.

“European member states would like the IMF to stay involved, but clearly, it will have to meet our criteria,” a senior official said, explaining that EU partners had to have a solid plan that would make it possible for Greece to repay its debt. The official spoke on condition of anonymity.

EU officials said the plan, which seeks tough reforms from Greece in exchange for about $95bn in financial aid through 2018, would require the IMF as a partner in funding and programme monitoring.

IMF said the agreement reached between Athens and European leaders is “not very concrete”, with some key issues not discussed.

For the IMF executive board to weigh joining the new bailout, “we need a concrete and ambitious solution to this debt problem,” the official said.

An analysis the IMF presented to EU leaders over the weekend forecasts that Greece will never get back in a position of being able to repay its debts unless “dramatic” measures are taken in the new programme to lighten the burden.

The IMF suggested three choices: stretching out debt repayments over decades, with a 30-year grace period, paying cash regularly to Athens to repay its debts or writing down some of the current value of the debt via a “haircut”.

Meanwhile, Alexis Tsipras, Greece’s prime minister, faced a revolt in his left-wing party and workers’ calls for strikes over the deal ahead of the parliament vote.

The bill is expected to pass with votes from opposition parties, but the Tsipras government’s political survival could be in danger if large numbers of its own legislators resign their seats or openly vote against the bill.

Many in his party have indicated they would refuse to vote for the deal because it was going back on election pledges to repeal austerity measures that have been imposed on Greece for years. 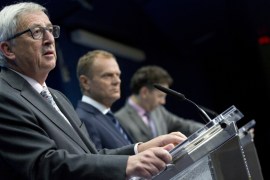 Greece agrees to austerity measures in return for three-year bailout worth up to $96bn after marathon talks in Brussels. 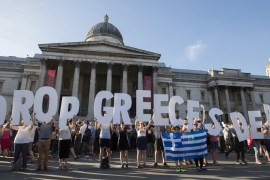 Can Greece be saved?

We examine the crucial choice facing Greeks on Sunday, whether to stay in or leave the eurozone.