A Malaysian supporters group has ramped up its protest against the arrival of English Premier League clubs Liverpool and Tottenham Hotspur for friendlies, urging fans to rip up tickets for the matches.

‘Ultras Malaya’ have labelled the May 27 Spurs fixture and July 24 Liverpool game against a Malaysian XI as “circus matches” and are angry at the disruption caused to their domestic league and World Cup qualifying preparations.

National teams rarely get such number of games in a year, so it makes sense for them to play

“Don’t buy the tickets, don’t go to the stadium,” the group said in a statement on Monday.

“The matches are simply held to make Football Association of Malaysia, the organisers and their cronies rich, so don’t let FAM and the organisers profit from this sort of nonsense.”

Alfadli Awaludin, a senior member of the Ultras Malaya supporters group, told Reuters last month the Premier League giants would be better off playing each other in Kuala Lumpur rather than disrupting local football.

The Spurs match comes days after the Malaysian Cup final, less than two weeks before Malaysia try to win gold at the Southeast Asian Games in June.

This is is followed swiftly by the start of the joint qualifying campaign for the 2018 World Cup and 2019 Asian Cup.

Ultras Malay said they expected the 80,000 capacity Shah Alam Stadium in Kuala Lumpur would not be full and that organisers would try to give out free tickets.

The statement urged supporters not to be “tempted” and to “get as many as possible, and then shred them”.

The president of the Malaysia Spurs supporter group said last month the team, and any from the English Premier League, should be welcomed in Malaysia.

“National teams rarely get such number of games in a year, so it makes sense for the national team to play so that more hours of competitive games are put on the clock,” Encik Syahizan Amir Abdul Wahab said.

“More games means more experience. It is also well-timed ahead of key regional competitions and qualifiers.”

The Ultras, however, believe the FAM should concentrate on organising friendly matches for the national team, who currently sit in their worst ever position of 166th in the FIFA rankings. 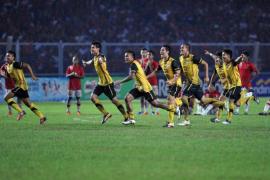 Malaysia: Kicking football into the limelight

Malaysia has big plans to take its struggling football team to greater heights in the global league.