The International Monetary Fund (IMF) has agreed to extend $17.5bn in loans to Ukraine in an effort to pull back the country from the verge of economic collapse.

“The plan is to disperse about $10bn worth of financing during the first year,” she said.

Natalie Jaresko, Ukraine’s finance minister, said earlier in the day that the government expected to receive $5bn from the IMF in the “coming days”.

Credit is being extended on condition that the government in Kiev implements deep structural reforms and slashes government spending.

On Tuesday, Ukrainian President Petro Poroshenko signed off on legislative measures to drastically reduce spending and also approved changes to the tax system.

“This fully carries out Ukraine’s side of the agreements that were reflected in a memorandum with the IMF,” Poroshenko said Wednesday at a joint press conference in Kiev with Swedish Prime Minister Stefan Lofven.

“They have maintained fiscal discipline in very difficult conditions, allowed the exchange rate to adjust, and have increased retail end-user prices for gas,” she said in a statement.

Lagarde said measures would be taken to help cushion the poorest from the impact of adjustments.

In Washington, the White House welcomed the IMF’s decision.

“The United States is working alongside international partners to provide Ukraine with the financial support it needs as it continues to take steps that will transform the Ukrainian economy and strengthen its democracy,” Josh Earnest, the White House spokesman, said in a statement.

Meanwhile, John Kerry, the US State Secretary, said on Wednesday the United States would provide an additional $75m of non-lethal assistance to Ukraine.

The US will also send 30 heavily armoured Humvees and 200 other regular Humvees, as well as radios, counter-mortar radars and other equipment.

All of the aid is non-lethal, and the drones are not armed. 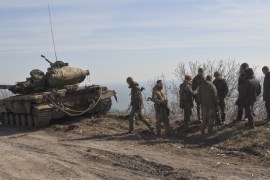 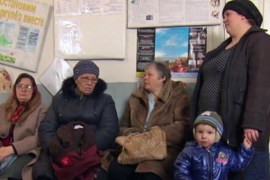 Conflict has cut off access to medical care in rebel-held territory and sent the price of medicine soaring. 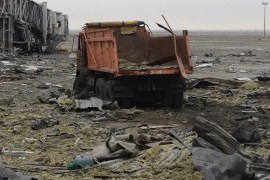