On the surface, Boeing’s now infamous rollout of the 787 “Dreamliner” seemed planned to perfection. It was a well-coordinated event of global scale; huge crowds, great weather and US celebrity news man Tom Brokaw acting as master of ceremonies. Even the date was perfect: July 8, 2007, 7-8-7 for those in the US.

“If you could have sat there with me to feel the pride, to see the faces of those machinists and those engineers,” says former Washington State governor Christine Gregoire, who was sitting in the front row with the Boeing leaders. “It was a very proud day.”

Boeing invited aviation industry analyst Richard Aboulafia with his wife. “It was a lovely setting, fantastic party afterwards,” he told Al Jazeera. “This is one of those pivotal moments in American industrial history. It was really a terrific feeling to be there at the time.”

When the big moment came, the guest of honor, the “Dreamliner”, didn’t disappoint. “They opened the doors of this giant assembly bay, and there it is sitting in the sun, and we all streamed outside and we all touched it,” says Seattle Times aerospace reporter Dominic Gates.

It was the public’s first glimpse of 787. To most, it looked perfect, at least on the surface.

“What I realised walking around it is that you could look up in the wheel well and you could see daylight coming through the cabin,” says Jon Ostrower, now of the Wall Street Journal. “Studying photos later on, I realized the doors were made of plywood. The airplane just wasn’t finished.”

At the time, Ostrower was a young aviation blogger working for Flight International Magazine. He didn’t get the chance to attend with the rest of the media. He was there as the guest of a Boeing engineer who liked his blog. So while the other reporters were busy filing stories, Ostrower was spending time with the plane. “During that hour, I had a chance to really kind of study it. Without any chaperone or minder or anything, I just had a chance to really kind of just study the details. And it wasn’t done,” says Ostrower.

The plane that was set to fly in two months wasn’t done. It was Ostrower’s reporting that would lead the way in revealing what was really going on with the 787 “Dreamliner”.

If you study video and photographs of the event carefully, you can see light streaming through the passenger windows into the airplane, revealing there is no cockpit and no wall separating the cockpit from the passenger bay.

For the workers, the problems were obvious. “We knew that the plane was just kind of a shell and empty. So for us, it’s kind of like you’re showing something that’s not done, it’s not ready,” says Shannon Ryker, a Boeing machinist.

Former Boeing engineer Stan Sorscher saw the plane shortly before it made its world debut. “Anybody looking at the airplane would know that there’s no chance that this thing is going to fly. It’s got nothing in it.”

What I realised walking around it is that you could look up in the wheel well and you could see daylight coming through the cabin.

Inside the factory, there was a scramble to salvage the situation. Hours after the rollout, the plane was in pieces. “Every panel came off the airplane. It got taken off its landing gear. The tail was taken off. It was a mad dash. It was an absolute mad dash to the first flight,” says Jon Ostrower.

The 787 business model, designed to save Boeing money, was backfiring. Many parts were coming in from hundreds of global suppliers either incomplete or incorrect. The workers in Everett couldn’t put the plane together properly.

“When the barrel sections did arrive, the reason they had nothing was because the supplier hadn’t put anything in,” says Sorscher, now a labour representative with Boeing’s engineers union, SPEAA. “They didn’t have a clip or a bracket or a wire or a connector. There was nothing there. Well, that’s why the first airplane spent 15 months in the first position of the assembly line, is because somebody had to figure all that out.”

It took a long time to “figure all that out”. The dream of flying in two months was just that – a dream.

“We get the first delay, which is a six-month delay and an admission that everything isn’t actually all right. It goes on from there and gets worse and worse and worse,” says Dominic Gates of the Seattle Times.

“You have to understand this was unprecedented. There had never been a Boeing delay in a Boeing program. No airplane had ever come out of development late.”

Few in the audience that day could have foreseen what would happen next. There were years of delays, public embarrassment and later the first fleet grounding in Boeing’s history.

For those who witnessed the spectacle, questions remain. How could executives at Boeing rollout this plane to such fanfare? Didn’t they know it couldn’t fly?

“There were only two conclusions you can draw,” says Aboulafia. “You have executives there who are either lying – in which case they’re clueless because they’re going to get caught in two months – or you have a complete disconnect between the people who were working on the plane, the engineers and the executives who are saying this. And sadly, I think it’s more of the second one. They weren’t lying. They simply didn’t know.”

But not everyone is ready to let Boeing executives, most notably Chief Executive Jim McNerney, plead ignorance. “Well, he’s either a fool or he’s lying, and I don’t think he’s a fool,” says Sanders.

“I don’t care if he’s a liar or an idiot,” says Sorscher. “Either way, he’s not the guy who should be running the company. He should be fired either way. He should be disgraced.”

History may judge the rollout to be a blip, an unfortunate by-product of an overzealous marketing campaign. But if the plane’s troubles continue, that ceremony may come to symbolise something more, something symptomatic of a new Boeing that cares more about marketing the dream than engineering realities.

Some are in little doubt. “It told me how far the company had fallen,” says Sanders. “More than any other single event, it was the big lie and it was a statement that the Boeing company is now all about the big lie.”

Al Jazeera put the following questions to Boeing regarding the July 2007 rollout:

Al Jazeera: Any comment on the statement that the airplane used at the 2007 rollout of the Dreamliner was a shell or a fake. Did Boeing executives know at the time that it was just a shell?

Boeing: These questions were publicly addressed by the Company years ago, and we will not add to that record here.

Al Jazeera: You mentioned that questions relating to the 2007 rollout had been publicly addressed by Boeing years ago, but I understand we have been unable to locate any press releases or interviews from Boeing. Would you point us towards whatever was said by Boeing on this subject, and ideally provide a copy of any press release or public statement that was issued at the time in relation to these claims?

Boeing offered links to the following two articles in response: 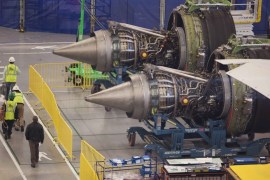 Aviation giant made engineers sign non-disclosure deals, leading to refusals to talk to the FAA and an official probe. 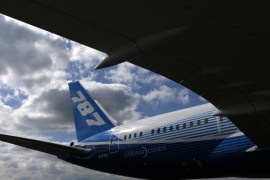 The long battle for information from America’s aviation regulator. 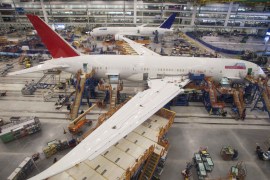 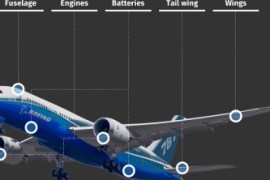