Striking farm workers in South Africa’s Western Cape province have clashed with police after blocking roads in several areas as part of a protest for higher wages.

Police fired rubber bullets at a crowd of hundreds of part-time farm workers in the town of De Doorns, after protesters flung stones at vehicles on the main highway running through the area, about 100km east of Cape Town.

The demonstrators were able to force the police back, Al Jazeera’s Tania Page reported from the town.

Protests are also taking place in other areas of Western Cape, including the town of Wolseley.

The strikers are trying to prevent other workers from going to work. They want their daily wages to be more than doubled to 150 South African rand ($17.5).

“We are struggling. It is very difficult to survive on 69 rand a day. School is starting and we don’t have money for school clothes,” Lena Lottering, 35, a mother of three, said.

“There is no food on the table and my children often go to bed hungry.”

Another worker, Aubrey Louw, 47, told Reuters he had worked on the farms since the 1970s when he received 45 rand a day.

“Now we get 65 rand. What is that? We want 150 rand. Farmers would rather employ security guards and buy new cars than pay us,” he said.

When talks to avert the strike broke down this week, union leaders blamed the intransigence of the farmers, highlighting the racial and wealth divisions that continue to rankle 18 years after the end of apartheid.

“We have been met with naked racism and white arrogance,” Nosey Pieterse, general secretary of the Bawsi Agricultural Workers Union of South Africa, said.

The government estimated that the fighting last year caused damage of up to $17.5m.

Our correspondent said that negotiations over the minimum wage had not been entirely abandoned.

“Talks are ongoing but they have stalled somewhat, and that is why the protests are taking place,” she said.

“[Strikers say] that this is a worker-driven strike, much like the strikes we saw in the minig sector last year, [although] there are some unions involved as well.” 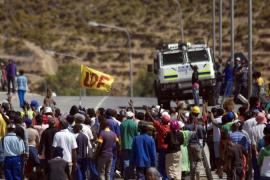 Western Cape farmers have downed tools again after negotiations to meet their demands for a pay increase failed. 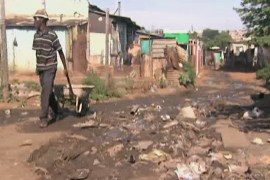 Residents in township of Soweto say Freedom Charter has failed to live up to its promises. 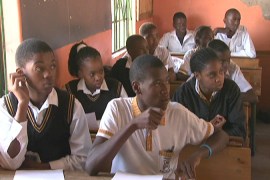