US weapons sales more than tripled in 2011, reaching a record high, according to a new congressional report.

The country sold $66bn worth of arms last year, up from $21.4bn in 2010. The previous record had been $31bn in 2009; global arms sales declined slightly after that because of the economic crisis.

America’s largest customer was Saudi Arabia, which purchased more than $33bn worth of weapons from the US, including dozens of F-15 fighter jets, missiles, and other materiel.

The United Arab Emirates and Oman also both spent billions, purchases driven in part by fears over Iran’s regional ambitions. The Obama administration has touted these deals as a major stimulus for the US economy, saying the Saudi arms sales alone would generate some 75,000 new jobs.

The US also arranged several multi-billion dollar deals with Asian nations, including an agreement with China to sell transport planes worth more than $4bn.

The report was prepared by the Congressional Research Service, which conducts studies for US lawmakers. 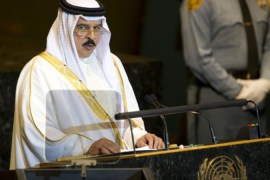 Arms sales to Bahrain under the scanner

As Bahrain’s human rights record is probed, the US postpones a proposed weapons deal with the troubled Gulf state.