Eurozone finance ministers have pressed Greece to prepare new budget cuts and conclude negotiations with bank creditors on a massive debt writedown within days to avoid a damaging default.

The ministers called on Greece and its EU-IMF auditors “to agree the key parameters of an ambitious adjustment programme as soon as possible,” Jean-Claude Juncker, the prime minister of Luxembourg and head of the Eurogroup, told a news conference early on Tuesday.

Greece has undertaken a raft of economic reforms, drastic budget cuts and tax increases since it received a first bailout in 2010, but it risks missing its deficit reduction targets due to a deteriorating economic situation that has left state revenues $1.1bn short of projected targets in 2011.

Eurozone finance ministers also rejected as insufficient an offer made by private bondholders to help restructure Greece’s debts, sending negotiators back to the drawing board and raising the threat of Greek default.

The ministers said they could not accept bondholders’ demands for a coupon of four per cent on new, longer-dated bonds that are expected be issued in exchange for their existing Greek holdings.

Banks and other private institutions represented by the Institute of International Finance (IIF) say a four per cent coupon is the least they can accept if they are going to write down the nominal value of the debt they hold by 50 per cent.

Greece, supported by the IMF, says it is not prepared to pay a coupon of more than 3.5 per cent, while Juncker said Greece needed to pursue a deal with private bondholders where the new interest rate was “clearly” below four per cent.

Referring to calls by the finance chiefs that Greece’s public creditors take bigger losses on bonds, Maria Fekter, the Austrian finance minister, said: “We know that the banks are not overly happy, but a crash is far more expensive than such a long-term plan”.

The ongoing talks, which continued on Tuesday, also included discussions on a new treaty to impose stricter budget rules on member states following calls from the European Central Bank (ECB) and the IMF for the bloc to impose tougher spending criteria.

Joerg Asmussen, an ECB board member, spoke on January 12 of a “substantial watering down” of discipline in the latest draft of the treaty due to the inclusion of an “escape clause” allowing countries to overspend in extraordinary circumstances.

Asmussen said Mario Draghi, the ECB president, met the president of the European Council and the chairman of the EU summits on Monday to discuss concerns about the wording of the treaty.

Meanwhile, Greece has named some 4,000 alleged tax dodgers, including a former media magnate and a prominent entertainer, with the worst offender owing the state nearly $1.3bn.

But much of that money might never be reclaimed, as some of the top offenders are in prison or their companies are bankrupt.

The list published, by the finance ministry on Sunday, is part of a campaign to crack down on rampant tax evasion, which, coupled with inefficient tax collection, is hampering the recession-hit eurozone member’s painful efforts to avoid bankruptcy.

But ministry officials acknowledged that it would be extremely hard to collect many of the outstanding debts, which total nearly $19.5bn.

Tim Friend, Al Jazeera’s correspondent in Athens, said that the list had previously been locked away in a safe in parliament.

“Now [the list] is public, with their names and how much they owe,” he said. “[The government] feels that if it manages to get even a percentage of it back, it would go some way to paying off Greece’s deficit.”

“The truth is that these lists contain debtors who in some cases have owed the money for a long period of time, so after a certain point one does not expect to be able to collect the debts,” finance ministry official Haris Theocharis said on Monday. 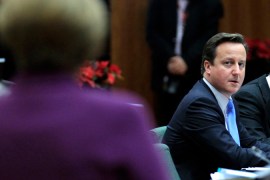 London versus the eurozone

David Cameron’s veto may mean that the UK might have to shuffle towards the EU exit.