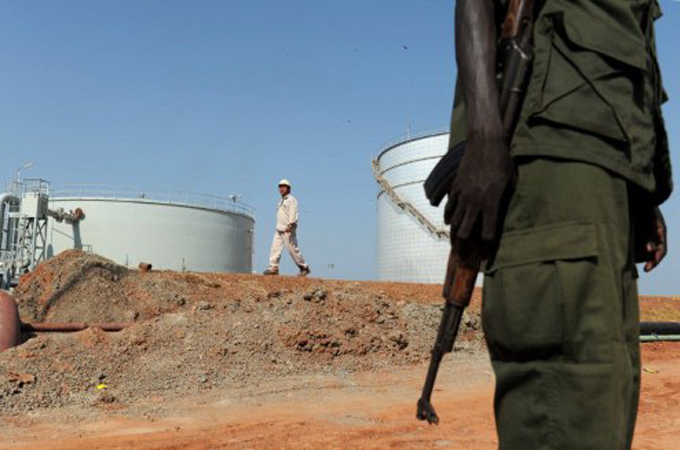 Most of Sudan’s oil reserves are in the south, but the refineries and shipping facilities are in the north [AFP]

Oil has been at the heart of Sudan’s conflict for decades. It is a critically important piece of the Sudanese economy, accounting for half of Khartoum’s revenue and nearly 98 per cent of the southern government’s revenue.

How much oil does Sudan produce?

At those levels, Sudan is not one of the world’s largest oil producers: It currently ranks 30th, between Australia and Ecuador. (Saudi Arabia, for comparison, produces nearly 9 million barrels per day.)

Is all of Sudan’s oil in the south?

Southern Sudan’s secession on July 9 is the latest chapter in a half-century struggle between the north and south.

Southern Sudan accounts for between 75 and 80 per cent of Sudan’s daily output. Its most productive oil fields are in the Paloich and Malut areas of Upper Nile state.

Another 5 per cent comes from the Abyei region, often described as “oil-rich.” That shorthand is not entirely accurate, at least not anymore: While Abyei accounted for 25 per cent of Sudan’s output in 2004, production has declined markedly since then.

Most of the productive oil fields remaining in northern Sudan are in South Kordofan state, another disputed territory which is supposed to hold “popular consultations” on its status later this year.

So why the dispute over oil revenues, if the south controls most of the oil?

Southern officials have said publicly that they’d like to keep 100 per cent of the profits from oil production after their country becomes independent.

Problem is, they can’t. All of Sudan’s oil refineries are located in the north. What’s more, Southern Sudan will be landlocked, and its only pipeline to the sea runs to Port Sudan in the north.

The south’s oil reserves are useless without the north’s cooperation, in other words – and Sudanese president Omar al-Bashir has already threatened to shut down the pipeline if Southern Sudan claims an unfair share of revenues.

When the two sides do negotiate a new royalty deal, Southern Sudan will almost certainly claim a larger share. The two sides currently split southern revenues equally under the terms of the 2005 Comprehensive Peace Agreement.

There is talk of building another pipeline to the sea through Kenya, allowing Juba to bypass Khartoum, but that would be a long and expensive project. For now, at least, Southern Sudan will depend on the north to export its oil.

Where does Sudan sell its oil?

Most of it – nearly two-thirds – goes to China, Sudan’s largest trading partner.

The state-owned China National Petroleum Corporation controls 40 per cent of the largest oil consortiums in Sudan. It has invested heavily in Sudan’s oil infrastructure, including the pipeline to Port Sudan and several refineries in the north.

And so it benefits heavily from Sudan’s oil industry, importing billions of dollars of oil per year. (Beijing does not release exact statistics on its imports from Sudan.)

The industry wasn’t always dominated by China: Chevron was the first oil company to invest in Sudan, and the French firm Total has a large concession in the south. But decades of civil war, and pressure from human rights groups, scared off many Western firms. The Canadian firm Talisman was forced to sell its 25 per cent stake in one of Sudan’s oil consortiums in 2002 because of a divestment campaign.