Police in Oakland have left the scene of earlier overnight clashes with Occupy Oakland protesters, firing tear gas to disperse demonstrators lingering in the streets after a day of large demonstrations that paralised the fifth largest port in the country.

Just after midnight on Thursday morning, hundreds of officers from at least six cities lined up shoulder to shoulder and donned gas masks, then declared the crowd to be an unlawful assembly and fired volleys of tear gas as protesters turned and ran.

A few activists paused to pick up canisters and hurl them back at officers as they fled.

“This was peaceful until you came!” a protester shouted at police. Police later charged the plaza with batons and more tear gas to push protesters farther into center of the square.

Tim Simons, an organiser with the local protest, told Al Jazeera that the police impetus for the first tear gas attack may have been based on a new “occupation” that some demonstrators started.

“After the demonstrations today, people went ahead and took over an abandoned building – a foreclosed bank owned property – and turned it into a social centre,” he said.

“There was no provocation at all, other than occupying a building, which is part of this movement.

“That was a very peaceful, calm, situation until the riot police moved in.”

Many of the street lights in the area suddenly went dark as the confrontation unfolded. It was not clear whether they were turned off or knocked out by a power disruption.

The clashes in Oakland, which shot to the forefront of nationwide anti-Wall Street protests after a former soldier was badly injured in a rally last week, followed a day of rallies that drew some thousands of supporters at their peak and shuttered the busy Port of Oakland.

A volunteer legal support group reported that just over 100 people were arrested during and after the melee.

The “Occupy” activists frustrated with a financial system they believe benefits corporations and the wealthy, had aimed to disrupt commerce with a special focus on banks and other symbols of corporate America.

A group, estimated by police at 7,000, and by local media outlets as large as 20,000, marched from Oakland’s central intersection to the city’s port, which handles about $39bn a year in imports and exports.

Longshoremen who work at the port said that their union contract prevented them from participating in the day’s protests, which organisers called a “general strike”, but a clause in the contract allows workers to stay out of work if they feel unsafe entering.

As a result, on Wednesday evening, a Port of Oakland spokesperson said maritime operations at the port had been “effectively shut down”.

“The port in Oakland is probably one of the most valuable places where money flows through,” Simons told Al Jazeera.

“These occupations actually have the capability to disrupt flows of capital, the flows of money, that the 1 per cent is using.”

Some protesters stood atop tractor-trailers stopped in the middle of the street. Others climbed onto scaffolding over railroad tracks as a band played played through loudspeakers, using amplifiers powered by stationary bike generators.

“Maritime area operations will resume when it is safe and secure to do so,” the port said in a statement. A port spokesperson said officials hoped to reopen the facility on Thursday morning.

Windows were smashed at several Oakland banks and an upscale supermarket. Howard Jordan, Oakland’s acting police chief, blamed the vandalism and unruliness on a small group that he identified as anarchists.

The demonstrations centred at Ogawa Plaza, scene of a tug-of-war last week between police who cleared an Occupy Oakland encampment there and protesters who sought to return, and ultimately succeeded in doing so.

Prior to marching on the port, protesters blocked the intersection of 14th Street and Broadway, where Scott Olsen, an Iraq war veteran, was wounded during a clash with police on the night of October 25.

It was the wounding of Olsen, a soldier turned peace activist who suffered a serious head injury during protests last week, that seemed to galvanise support and extra media attention.

Olsen remains in an Oakland hospital and has been moved from critical to fair condition. 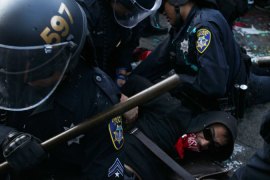 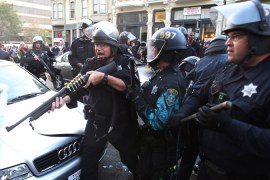 Police crack down on Oakland protesters

“Occupy” demonstrators marching in anger over arrests made earlier, met with flash grenades and tear gas in US city. 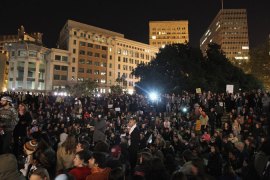 Oakland protesters return to the streets 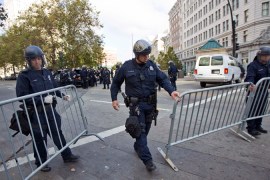 At least 85 “occupy” protesters are picked up as police clear an encampment following a two-week standoff.